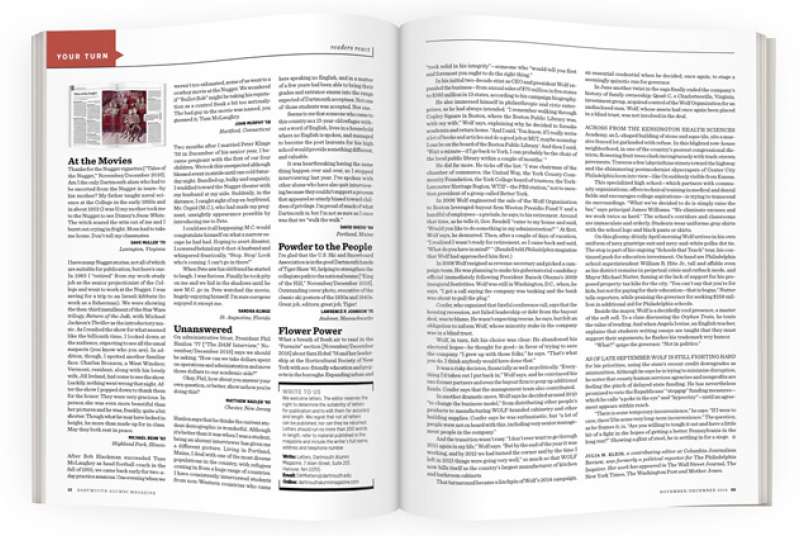 At the Movies
Thanks for the Nugget vignettes [“Tales of the Nugget,” November/December 2016]. Am I the only Dartmouth alum who had to be escorted from the Nugget in tears—by his mother? My father taught naval science at the College in the early 1950s and in about 1953 (I was 5) my mother took me to the Nugget to see Disney’s Snow White. The witch scared the wits out of me and I burst out crying in fright. Mom had to take me home. Don’t tell my classmates.

I have many Nugget stories, not all of which are suitable for publication, but here’s one: In 1983 I “retired” from my work-study job as the senior projectionist of the College and went to work at the Nugget. I was saving for a trip to an Israeli kibbutz (to work as a fisherman). We were showing the then-third installment of the Star Wars trilogy, Return of the Jedi, with Michael Jackson’s Thriller as the introductory music. As I readied the show for what seemed like the billionth time, I looked down at the audience, expecting to see all the usual suspects (you know who you are). In addition, though, I spotted another familiar face: Charles Bronson, a West Windsor, Vermont, resident, along with his lovely wife, Jill Ireland, had come to see the show. Luckily, nothing went wrong that night. After the show I popped down to thank them for the honor. They were very gracious. In person she was even more beautiful than her pictures and he was, frankly, quite a bit shorter. Though what he may have lacked in height, he more than made up for in class. May they both rest in peace.

After Bob Blackman succeeded Tuss McLaughry as head football coach in the fall of 1955, we came back early for two-a-day practice sessions. One evening when we weren’t too exhausted, some of us went to a cowboy movie at the Nugget. We wondered if “Bullet Bob” might be taking his reputation as a control freak a bit too seriously: The bad guy in the movie was named, you guessed it, Tuss McLaughry.

Two months after I married Peter Klinge ’59 in December of his senior year, I became pregnant with the first of our four children. We took this unexpected although blessed event in stride until one cold Saturday night. Bundled up, bulky and ungainly, I waddled toward the Nugget theater with my husband at my side. Suddenly, in the distance, I caught sight of my ex-boyfriend, Mr. Cupid (M.C.), who had made my pregnant, unsightly appearance possible by introducing me to Pete.

I could see it all happening: M.C. would congratulate himself on what a narrow escape he had had. Hoping to avert disaster, I cowered behind my 6-foot-4 husband and whispered frantically, “Stop. Stop! Look who’s coming. I can’t go in there!”

When Pete saw his old friend he started to laugh. I was furious. Finally he took pity on me and we hid in the shadows until he saw M.C. go in. Pete watched the movie, hugely enjoying himself. I’m sure everyone enjoyed it except me.

Unanswered
On administrative bloat, President Phil Hanlon ’77 [“The DAM Interview,” November/December 2016] says we should be asking, “How can we take dollars spent on operations and administration and move those dollars to our academic side?”

Okay, Phil, how about you answer your own question, or better, show us how you’re doing this?

Hanlon says that he thinks the current student demographic is wonderful. Although it’s better than it was when I was a student, being an alumni interviewer has given me a different picture. Living in Portland, Maine, I deal with one of the most diverse populations in the country, with refugees coming in from a huge range of countries. I have consistently interviewed students from non-Western countries who came here speaking no English, and in a matter of a few years had been able to bring their grades and entrance exams into the range expected of Dartmouth acceptees. Not one of  those students was accepted. Not one.

Seems to me that someone who came to this country as a 13-year-old refugee without a word of English, lives in a household where no English is spoken, and managed to become the poet laureate for his high school would provide something different, and valuable.

It was heartbreaking having the same thing happen over and over, so I stopped interviewing last year. I’ve spoken with other alums who have also quit interviewing because they couldn’t support a process that appeared so utterly biased toward children of privilege. I’m proud of much of what Dartmouth is, but I’m not as sure as I once was that we “walk the walk.”

Powder to the People
I’m glad that the U.S. Ski and Snowboard Association is in the good Dartmouth hands of Tiger Shaw ’85, helping to strengthen the collegiate path to the national teams [“King of the Hill,” November/December 2016]. Outstanding cover photo, evocative of the classic ski posters of the 1930s and 1940s. Great job, editors; great job, Tiger!

Flower Power
What a breath of fresh air to read in the “Pursuits” section [November/December 2016] about Sara Hobel ’76 and her leadership at the Horticultural Society of New York with eco-friendly education and projects in the boroughs. Expanding urban and prison gardening programs clearly advances the health of communities and enriches the souls of those who do the gardening.

Big Oil, Big Money
The Irving Institute [“Campus,” November/December 2016] sounds like a great way to synergize so much of what Dartmouth does well. But let’s not forget the elephant in the room.

The forces of big oil and coal conspire against efforts such as this politically and legislatively. Consider the Koch brothers and their super PACs, the Petersen Institute and other “institutions” dedicated to unbridled capitalism and energy production without regulation. Think of all the endowed professorships at other universities where the Kochs control who is appointed and what they are allowed to teach. A far throw from academic policy at Dartmouth.

Mechanical solutions to global energy needs alone will not lead to stopping global warming and fostering energy sustainability. The Irving Institute should heavily emphasize the importance of public policy, as well as courses and practical programs for legislative change.

This generous grant from the Irvings is a great beginning. The hard part is not raising the remaining $47 million but raising the public will to reject climate denial and embrace a deeper understanding of the planet’s energy needs. You can’t escape this broader battle and the political obstacles that will be thrown against these efforts.

Home Sweet Home
“House Communities” [November/December 2016] had a drawing of Ripley, Woodward and Smith dorms. I lived in the middle one for all four years. I always hated to go outside when visiting Ripley or Smith in the middle of winter. As the College is committed to its new communities, I wonder if consideration is being given to opening up a passageway from Woodward to each of the other two, if that is feasible. Although I have only been back once, very briefly, since graduation, I seem to remember a common wall between Woodward and the adjacent other ones. Caveat: I majored in English, not engineering.