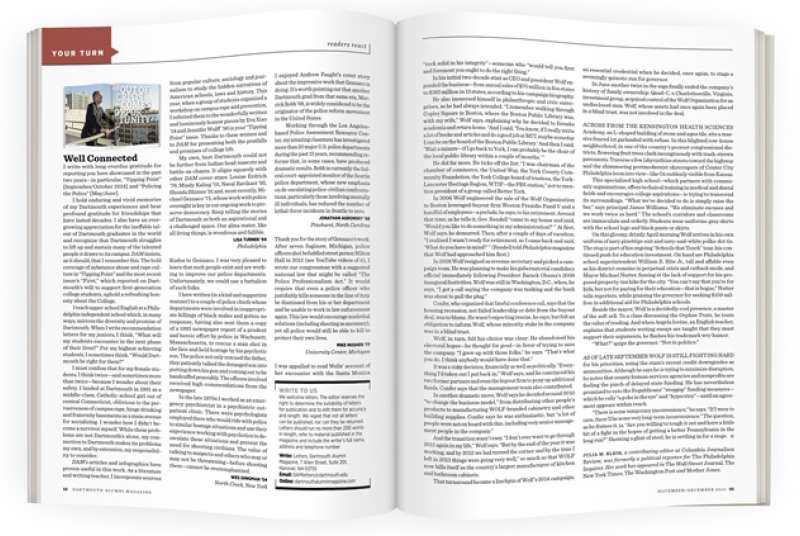 Well Connected
I write with long-overdue gratitude for reporting you have showcased in the past two years—in particular, “Tipping Point” [September/October 2014] and “Policing the Police” [May/June].

I hold enduring and vivid memories of my Dartmouth experiences and bear profound gratitude for friendships that have lasted decades. I also have an ever-growing appreciation for the ineffable talent of Dartmouth graduates in the world and recognize that Dartmouth struggles to lift up and sustain many of the talented people it draws to its campus. DAM insists, as it should, that I remember this. The bold coverage of substance abuse and rape culture in “Tipping Point” and the most recent issue’s “First,” which reported on Dartmouth’s will to support first-generation college students, uphold a refreshing honesty about the College.

I teach upper-school English at a Philadelphia independent school which, in many ways, mirrors the diversity and promise of Dartmouth. When I write recommendation letters for my juniors, I think, “What will my students encounter in the next phase of their lives?” For my highest achieving students, I sometimes think, “Would Dartmouth be right for them?”

I must confess that for my female students, I think twice—and sometimes more than twice—because I wonder about their safety. I landed at Dartmouth in 1991 as a middle-class, Catholic-school girl out of central Connecticut, oblivious to the pervasiveness of campus rape, binge drinking and fraternity basements as a main avenue for socializing. I wonder how I didn’t become a survivor myself. While these problems are not Dartmouth’s alone, my connection to Dartmouth makes its problems my own, and by extension, my responsibility to consider.

DAM’s articles and infographics have proven useful in this work. As a literature and writing teacher, I incorporate sources from popular culture, sociology and journalism to study the hidden narratives of American schools, laws and history. This year, when a group of students organized a workshop on campus rape and prevention, I referred them to the wonderfully written and luminously honest pieces by Eva Xiao ’14 and Jennifer Wulff  ’96 in your “Tipping Point” issue. Thanks to these women and to DAM for presenting both the pratfalls and promises of college life.

My own, best Dartmouth could not be further from Indian head mascots and battle-ax chants. It aligns squarely with other DAM cover-stars: Louise Erdrich ’76, Mindy Kaling ’01, Naval Ravikant ’95, Shonda Rhimes ’91 and, most recently, Michael Gennaco ’75, whose work with police oversight is key in our ongoing work to preserve democracy. Keep telling the stories of Dartmouth as both an aspirational and a challenged space. Our alma mater, like all living things, is wondrous and fallible.

Kudos to Gennaco. I was very pleased to learn that such people exist and are working to improve our police departments. Unfortunately, we could use a battalion of such folks.

I have written (in a kind and supportive manner) to a couple of police chiefs whose departments were involved in inappropriate killings of black males and gotten no response, having also sent them a copy of a 1995 newspaper report of a prudent and heroic effort by police in Wachusett, Massachusetts, to rescue a man shot in the face and held hostage by his psychotic son. The police not only rescued the father, they patiently talked the deranged son into putting down his gun and coming out to be handcuffed peaceably. The officers involved received high commendations from the newspaper.

In the late 1970s I worked as an emergency psychiatrist in a psychiatric outpatient clinic. There were psychologists employed there who would ride with police to similar hostage situations and use their experience working with psychotics to deescalate these situations and prevent the need for shooting civilians. The value of talking to suspects and others who may or may not be threatening—before shooting them—cannot be overemphasized.

I enjoyed Andrew Faught’s cover story about the impressive work that Gennaco is doing. It’s worth pointing out that another Dartmouth grad from that same era, Merrick Bobb ’68, is widely considered to be the originator of the police reform movement in the United States.

Working through the Los Angeles-based Police Assessment Resource Center, my amazing classmate has investigated more than 20 major U.S. police departments during the past 15 years, recommending reforms that, in some cases, have produced dramatic results. Bobb is currently the federal court-appointed monitor of the Seattle police department, whose new emphasis on de-escalating police-civilian confrontations, particularly those involving mentally ill individuals, has reduced the number of lethal-force incidents in Seattle to zero.

Thank you for the story of Gennaco’s work. After seven Saginaw, Michigan, police officers shot befuddled street person Milton Hall in 2012 (see YouTube videos of it), I wrote our congressman with a suggested national law that might be called “The Police Professionalism Act.” It would require that even a police officer who justifiably kills someone in the line of duty be dismissed from his or her department and be unable to work in law enforcement again. This law would encourage nonlethal solutions (including shooting as necessary), yet all police would still be able to kill to protect their own lives.

I was appalled to read Wells’ account of her encounter with the Santa Monica Police Department [“In the Crossfire,” May/June]. It does seem like overkill to send 17 officers to handle a possible burglary, based on an uncorroborated phone call. But, just as it is important for the police not to go beyond the evidence—not to assume that the woman answering their call from inside the apartment is a burglar or a home invader wielding a weapon—so too it is important for Wells—and DAM—not to go beyond the evidence.

Is the SMPD racist? From the story Wells tells, she doesn’t know.  And neither do we. What we can know from the story—and yet it is what the story doesn’t tell us—is that every interaction between the police and the public is fraught with potential peril, no matter the color of the people involved. What to each of us in the public may seem a trivial infraction or an unjustified accosting is, to police officers, the chance to be ambushed and given a tearful funeral.

We can manage this issue better by questioning the apparent militarization of some police forces, by challenging the protocols used to assess and neutralize potential threats, by looking closely at the quality of police training and discipline and so on. The police owe it to themselves and the rest of us to better explain “where the officer is coming from,” how he or she has been trained, the protocols that are used to manage an encounter.  It is a hard, hard job most of us don’t understand well enough.

Wells’ account doesn’t try to address that issue at all. With the facts available to her, she cannot connect dots between her case and that of Freddie Gray, Michael Brown, Eric Garner and others in the news, but she seems to want to do so.  She feels it is important to mention those cases, as if to shape this narrative not as “police overreact to a reported burglary, no harm done, but God was I scared” but as “incorrigibly racist police might almost have killed a person of color.” I think that is very unfortunate.

First Gen
I am so, so thrilled with the steps our beloved school has taken to support the transitions and experiences of first-gen students [“First,” May/June]. The first in my family to attend and graduate from college, I can echo many of the struggles shared in this article and am overwhelmed with positive emotions to learn of growing support systems on campus. I am ever thankful for my Dartmouth experience and education, both of which have laid the foundation in my career to strive to support first-gen students and others in transition. Thank you all for your truth, your strength and your honesty. Keep up the great work.

Symbolism
Please pardon my exasperation with your characterization of the Greek Leadership Council’s banning of the Dartmouth Indian head in houses as being “good news” [“Campus Confidential,” May/June].

The symbol, offensive to too many for too long, rightly has faded and is fading into the past. Was it really necessary to take the added step of banning its display? Was its offense so critical as to warrant a prima facie abridgment of freedom of expression?

Although it is a tasteless display of sophomoric loutishness, I hardly see it as being hate speech. That should be the real line of prohibition of expression in a college of Dartmouth’s quality and reputation.

Why is a “new rule that bans Greek houses from displaying the Dartmouth Indian head” regarded as “good news”?

The “good news” for Greek houses is that their free-speech rights under the First Amendment were infringed?

My own fraternity has done many good, charitable, caring deeds on campus and in the broader Hanover community this past year, things many unaffiliated students don’t even think of doing between protesting fraternity speech and patting themselves on the back for it. Could DAM editors not bring themselves to give Greeks even a little credit where it is rightly due?

The DAM staff mourns the recent deaths of two longtime and esteemed colleagues, sales manager Tita Reiche and business manager Joanne Coburn. They loved their jobs here and brought an inimitable spirit to our offices. They are dearly missed, and we extend our deepest sympathies to their families. —The Editors