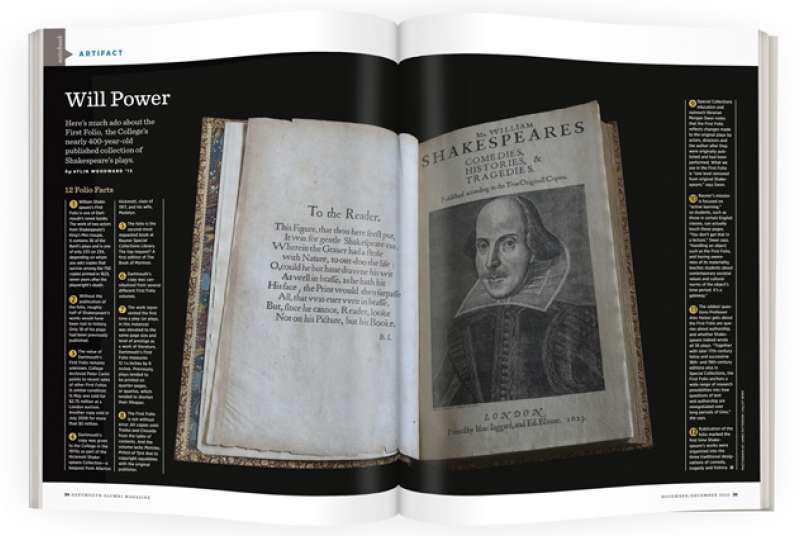 1.  William Shakespeare’s First Folio is one of Dartmouth’s rarest books. The work of two actors from Shakespeare’s King’s Men troupe, it contains 36 of the Bard’s plays and is one of only 233 (or 234, depending on whom you ask) copies that survive among the 750 copies printed in 1623, seven years after the playwright’s death.

2.  Without the publication of the folio, roughly half of Shakespeare’s works would have been lost to history. Only 18 of his plays had been previously published.

3.  The value of Dartmouth’s First Folio remains unknown. College Archivist Peter Carini points to recent sales of other First Folios in similar condition: In May one sold for $2.75 million at a London auction. Another copy sold in July 2006 for more than $5 million.

4.  Dartmouth’s copy was given to the College in the 1970s as part of the Hickmott Shakespeare Collection—a bequest from Allerton Hickmott, class of 1917, and his wife, Madelyn.

5.  The folio is the second-most requested book at Rauner Special Collections Library. The top request? A first edition of The Book of Mormon.

7.  The work represented the first time a play (or plays, in this instance) was elevated to the same page size and level of prestige as a work of literature. Dartmouth’s First Folio measures 12 3/8 inches by 8 inches. Previously, plays tended to be printed on quarter-pages, or quartos, which tended to shorten their lifespan.

8.  The First Folio is not without error. All copies omit Troilus and Cressida from the table of contents. And the volume lacks Pericles, Prince of Tyre due to copyright squabbles with the original publisher.

9.  Special Collections education and outreach librarian Morgan Swan notes that the First Folio reflects changes made to the original plays by actors, directors and the author after they were originally published and had been performed. What we see in the First Folio is “one level removed from original Shakespeare,” says Swan.

10.  Rauner’s mission is focused on “active learning,” so students, such as those in certain English classes, can actually touch these pages. “You don’t get that in a lecture,” Swan says. “Handling an object such as the First Folio, and having awareness of its materiality, teaches students about contemporary societal values and cultural norms of the object’s time period. It’s a gateway.”

11.  The oddest questions Professor Alex Halasz gets about the First Folio are queries about authorship, and whether Shakespeare indeed wrote all 36 plays. “Together with later 17th-century folios and successive 18th- and 19th-century editions also in Special Collections, the First Folio anchors a wide range of research possibilities into how questions of text and authorship are renegotiated over long periods of time,” she says.

12.  Publication of the folio marked the first time Shakespeare’s works were organized into the three traditional designations of comedy, tragedy and history.