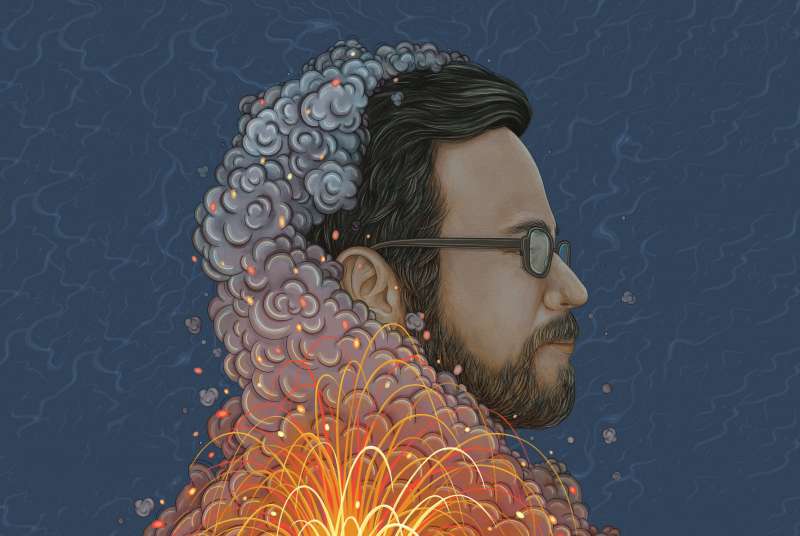 Where the Lava Flows

As head of the American Volcano Disaster Assistance Program, Jacob Lowenstern ’85 prepares for the worst—without knowing when it may come.
Matthew Mosk ’92 | Mar - Apr 2018

Having crossed the globe, Jacob Lowenstern arrived at the tree-canopied campus of a technical university in West Java, Indonesia, last fall at what seemed like a moment of calm. His colleagues from the U.S. Geological Survey had for more than a decade made the annual trek to confer with a small group of international scientists in this tectonic hot spot. Now, Lowenstern was about to take over as head of the American Volcano Disaster Assistance Program—a premier group of scientists who help developing countries confront the daunting risks of an eruption, an effort launched in 1986 by the U.S. Geological Survey and the U.S. Agency for International Development after an eruption in Colombia killed 25,000 people. Lowenstern’s new job wouldn’t start until January, but he joined the team, mainly to observe.

No one in the room had any hint that a nearby volcano was beginning to stir.

Lowenstern’s fascination with volcanoes emerged when he was an undergrad. He grew up in Virginia obsessed with nature, spending his high school years tackling the dynamic trails that weave through the Blue Ridge Mountains. That interest only grew when he landed in Hanover. He spent three freshman trip seasons on the lodge crew and chaired Cabin & Trail. It was only after he began taking geology courses that Lowenstern discovered the College’s rich connection to the study of volcanoes.

“The reason I am a volcanologist is because of the people who were at Dartmouth,” he says. “The culture [in the earth sciences department] was saturated with volcanology.” At the root of that interest was legendary geologist Richard Stoiber ’32, who joined the faculty three years after graduating and taught for more than 50 years. His students describe him as a quirky and memorable teacher, sometimes disheveled, covered in chalk dust, known for his eccentric descriptions of geological phenomena. For example, to Stoiber, sulfur dioxide emissions were “wet farts,” says geologist Stanley N. Williams ’80, now at Arizona State, who describes him as “extremely entertaining.”

Generations of Stoiber’s students trekked with him to Central American field sites—trips of seven to 10 weeks that grew into what’s now known as “The Stretch” program, which takes place in the western United States. Three students from the 1983 trip alone wound up studying volcanoes for their careers.

Stoiber’s contagious passion left an astonishing legacy. Julia Hammer ’93, a geology professor at the University of Hawaii, calls it “the pipeline into volcanology,” and a scan across the academic landscape surfaces the names of leading volcanologists such as William Rose ’66, a professor at Michigan Tech University, and Columbia University’s Terry Plank ’85, a 2012 MacArthur Fellow.

“The pyrotechnic show can be most educational and pleasing to the eye.”

On Wednesday, September 24, 1986, having earned a Fulbright at L’Istituto di Scienze della Terra in Italy, Lowenstern began an ascent of Mount Etna to gather samples from a new lava flow. “If one keeps at a safe distance, the pyrotechnic show can be most educational and pleasing to the eye,” Lowenstern wrote in a personal account of his adventure up Etna.

On a stop for lunch, as he and a guide snaked up through the tree line, Lowenstern noticed plumes of smoke drifting south from vents in the volcano. By late afternoon, he began feeling tremors. Then the volcano belched gas and spat out waves of hardened lava blocks. Lowenstern stopped to snap pictures. His guide suggested they retreat. Etna continued to spit a fountain of lava in their wake.

“The lava fountain grew to twice its previous size, and blocks and bombs scattered in a chaotic spree,” Lowenstern wrote. Belches that previously sounded like waves breaking on a beach “now roared like a full-fledged hurricane.…My lungs had difficulty grasping enough of the thin air.”

Molten projectiles screamed off the summit, landed and began to roll, red hot, down the valley toward him. He compared feeling the heat of the erupting magma—about 2,000 degrees—to feeling the full heat of an ultra-hot Dartmouth Homecoming bonfire while standing a quarter-mile away on Tuck Mall. “Whereas before I had enjoyed my little surge of adrenaline and our flight off of the summit, I was now petrified,” he wrote. Rescue came in the form of locals on motorcycles, who whisked him and his guide to safety.

Fieldwork has been a driving passion for Lowenstern ever since. For the 15 years prior to his Java trip, he served as scientist-in-charge of the Yellowstone Volcano Observatory. If his only task had been to wait for an eruption, he says, it would have made him the “Maytag Man of Volcanoes,” a reference to old TV ads about washers and dryers so reliable all Maytag repairmen did was sit doing nothing. The super-volcano lurking under Yellowstone has had three big eruptions—2.1 million, 1.3 million and 630,000 years ago. But interest remains high in this sleeping giant, in part because the eruptions were thousands of times larger than is typical, ejecting so much rock and ash into the sky they threw the earth into cataclysmic volcanic winters.

Lowenstern believes the site is worth studying, even though an eruption is hardly imminent. He recently told Time a massive eruption at Yellowstone remains about as likely as a large asteroid hitting Earth. “It’s not impossible to rule out, but it’s a remote possibility,” he says. His skepticism is not universally shared. Last fall new studies suggested a super-blast can emerge far more rapidly than previously thought. The fears associated with that potential have turned Yellowstone into a source of fascination for doomsday fanatics. In 2005 the BBC dramatized the threat with the docudrama Supervolcano, which depicted with frightening realism a massive blast and its apocalyptic aftermath. Lowenstern consulted on the film, and when it aired, experts in the field praised its scientific accuracy.

A far more immediate concern to Lowenstern last fall was the situation in Bali, Indonesia, about 500 miles east of the university where he was meeting with other experts. They were discussing how best to allocate U.S. aid to help Indonesia predict eruptions, when tremors began to hit Mount Agung, a volcano in Bali that had been quiet since a 1963 eruption killed more than 1,000 people. As the tremors grew more frequent and powerful, tourists there returned with videos showing new steam vents in the crater. Lowenstern knew these signs meant more violence might soon be expected from the volcano. Theoretical planning discussions pivoted to address the immediate action that was needed.

Indonesian officials issued an advisory and raised alert levels. By the next day, the tremors came faster and stronger. The country’s experts widened their evacuation zone. The role of Lowenstern’s team was to interpret fresh data as it arrived. “Everything was getting more and more intense,” Lowenstern says. By week’s end, more than 100,000 people had been moved out of harm’s way.

Lowenstern knows to expect the worst but does not know when to expect it. “Nature doesn’t operate on our preferred schedule,” he says. It took nearly three months for a simmering Mount Agung to begin throwing huge ash plumes into the atmosphere and sending mudflows down the mountainside. Lowenstern’s official first day with the Volcano Disaster Assistance Program was still a few weeks away, but already he was immersed with the team, working through the Thanksgiving holiday.

“Overall,” he says, “they are much more prepared than three months ago, and certainly more than in 1963” to prevent loss of life, with much of the threatened population already evacuated. “On the other hand, the population of the region is much higher than in 1963, and it’s difficult to predict the exact nature of an eruption or its extent. If activity drags on for months, there will be pressure to move people back to their homes. There are a host of economic, political and sociological variables that will help determine success. Science is only part of the equation.”

Mount Agung is just one hotspot Lowenstern has on his radar now that he has taken over his new office. Iceland’s Bardarbunga volcano belched to life in early November. Only one thing is certain about his new post: When the next eruption occurs, his number will be one of the first ones dialed.

Matthew Mosk is an investigative reporter for ABC news.