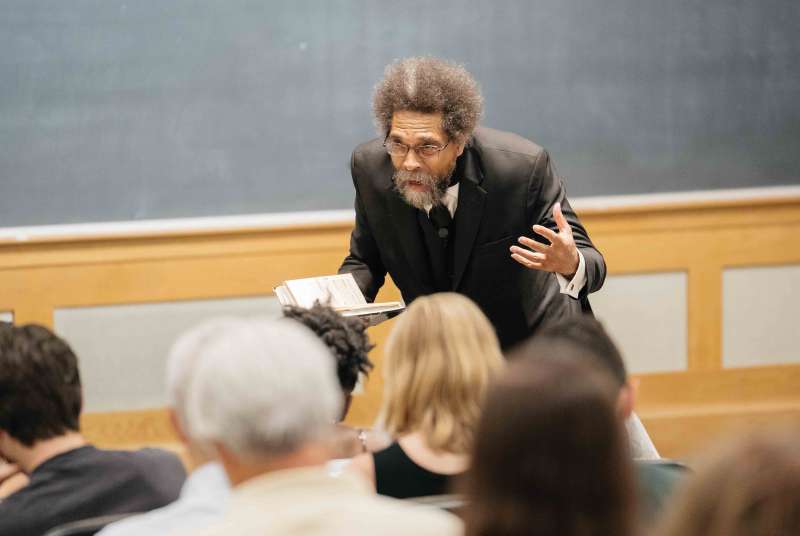 “I am a bluesman in the life of the mind and a jazzman in the world of ideas,” Cornel West likes to say about himself. West, a Harvard professor of the practice of public philosophy who visited Dartmouth this summer to teach “The Historical Philosophy of W.E.B. Du Bois,” is indeed a virtuoso performer. His instrument is not a saxophone or a piano but his vast knowledge of philosophy and culture. West captivated an auditorium full of students with a lecture on early 20th-century black activism, not unlike the way John Coltrane would hypnotize a jazz-club audience. In his three-hour-long performances of academic improvisation, West riffed on Greek philosophy, American history and pop culture. He recalled dates and statistics, cited Hebrew scripture, engaged students in Socratic dialogue, quoted Toni Morrison, Spinoza, Goethe, Melville, Tupac and Beyoncé—and somehow managed to always tie everything back to Du Bois and the concept of paideia, the ancient Greek ideal of self-cultivation for the sake of a better society.

West speaks with his whole body. He pushes out his chest like Superman when discussing courage, he tiptoes daintily across the stage when impersonating a 19th-century genteel white lady reading Du Bois, he erupts in dance moves when inspired by a rap reference and occasionally he bursts into song. At one point, a musing on the need to acknowledge others’ humanity reminded him of a pop song. “You have your computer here, sister,” he said, turning to a front-row student. (West addresses everyone as “sister” or “brother” to emphasize our common humanity.) “Can you find ‘Caravan of Love?’ ” A quick search located a YouTube video of the 1980s R&B hit promoting world peace and universal love, and, as West sang along and hit the high notes, the class applauded.

The student who lent her laptop to West, Monik Walters ’19, an African American studies and geography double-major, says she feels very lucky to have had the opportunity to take West’s course. President of the Afro-American Society, an intern for black student advising and an undergraduate advisor for the Shabazz Center for Intellectual Inquiry, Walters tried to arrive early every class to secure a place at the front of the big lecture hall.

In addition to 160 registered students, West’s course attracted a steady stream of auditors and visitors. West guided them all through a close reading of The Souls of Black Folk and Dusk of Dawn, two seminal works of his hero, Du Bois (1868-1963), a leading African American intellectual, cofounder of the NAACP and a prolific writer who, in his long career as an academic and activist, wrote about the dehumanizing effects of racism and the pain of living in a world that does not recognize black people’s full humanity. West also explored initiatives to attain equal rights for African Americans.

“If at the end of this course you say, ‘I already knew what we would learn and I agree with everything,’ then you have wasted your money,” West warned students in his introductory lecture. “This class will be academically promiscuous,” he announced, then exhorted students to question everything Du Bois wrote. Du Bois, West told students, never stopped questioning and challenging himself and repeatedly changed his opinions during his long life, becoming increasingly radical with age. In 1951, when he was 83, the U.S. government indicted Du Bois and tried him for his pacifist and socialist ideology, considering him and his pacifist movement “un-American” in the context of the Cold War. Well after his acquittal, he joined the Communist Party at the age of 93, and died in Ghana in 1963 at the age of 95 after the U.S. government had refused to renew his passport.

“I want to unsettle students, to unnerve them,” says the firebrand lecturer.

West, who was among the counter-protestors at the August white supremacist rally in Charlottesville, Virginia, seems to have become increasingly radical with age, too. He has made enemies by publicly denouncing former President Barack Obama and by throwing his support behind Green Party candidate Jill Stein against Democrat Hillary Clinton in the 2016 elections, but West, 64, is surprisingly old-fashioned for a radical. His dress is conservative—he always wears a three-piece black suit with white shirt and black cravat—he dismisses contemporary culture as “a joyless quest for pleasure” and he gently chides students for chewing gum in the classroom or wearing a baseball cap backward. West’s radicalism stems from his ardent commitment to the traditional ideal of paideia, which, West maintains, is also the central theme of Du Bois’ life and writing. This is the ideal West wants to instill in his students.

“The worst way of being in the world,” West warned them, “is to go through life thinking that the best thing is being the smartest person in the room.” He urged students to develop their souls and hearts, to “treat people right” and to use their educations for something bigger than themselves.

“I want to unsettle students, to unnerve them—and to critically engage them in the formation of their own selves and souls. That’s what paideia is all about,” West says. “Dartmouth is a grand institution but, like a whole host of institutions, it is tied to a blind spot—not just inadequacies and shortcomings, but the structure of domination,” he told DAM. “It must build on its best and keep track of its worst, which is what it means to be a grand institution.”

West succeeded in unsettling his students, especially during the last hour of each class, which was set aside for questions and discussion. Every week of the term, students submitted written responses to assigned reading, some of which West shared with the class. One student’s question about why racism and prejudice persist triggered a debate on how to shake society out of complacency. “Some people need to be put into a place of discomfort to be spurred into action,” said one student. “Everyone knows about oppression. It’s not a secret. But if you’re not affected, it’s easy to stay in your own bubble and ignore it.”

“How can we expand the circle of empathy?” asked West. “There are different ways of knowing,” replied a student, who then argued that theoretical knowledge doesn’t evoke the same empathy and sense of urgency as personally knowing someone who is suffering from oppression.

A white, female student chimed in to say that her grandmother, who grew up in Missouri in the 1950s, remembers that she initially couldn’t understand the problem of segregation because she had never seen a black person until she was in her 30s. “Sometimes you don’t know what you don’t know,” the student concluded.

In The Souls of Black Folk Du Bois describes becoming aware that others denied his humanity because of his skin color. He called this “double consciousness,” and argued that black people in America lived in a perpetual conflict with themselves because of the “sense of always looking at one’s self through the eyes of others.”

Caleb Smith ’19, a religion major on the premed track, says that Du Bois’ concept of double consciousness is still very relevant for today’s African American experience. “The paradox is that you can never exist fully as yourself because you are always divided,” says Smith. He explains that black people who integrate too well in white society worry they’ll be considered “Oreos” (black outside but white inside), while at the same time they are aware that in white society they are being judged by their skin color. For example, Smith explains, people on campus often assume that, just because he is a black man, he must be at Dartmouth as an athlete. One thing he particularly appreciated about West’s course is that white friends who took the course finally understand his inner conflict. “It’s something I wouldn’t have known how to convey to them otherwise,” says Smith.

It’s not clear that a just society will ever be attained, West cautioned students, because the world is imperfect and all people are broken vessels: “The question is: Do we have the courage, tenacity and compassion to keep our eyes on the ideals that take us beyond our tribalism and narcissism?” West recalled how Du Bois urged people to always keep striving for goodness and justice in an imperfect reality. In the last chapter of The Souls of Black Folk, Du Bois interpreted music as black people’s expression of hope for the possibility of a better world, one in which “men will judge men by their souls and not by their skins.”

That’s where the art of improvisation comes into play. West argued that blues and jazz music are the inventions of people trying to survive in an uncertain, hostile world, a world in which they need all their improvisational skills not to succumb to despair. “Black folk have made improvisation a way of life,” West told students.