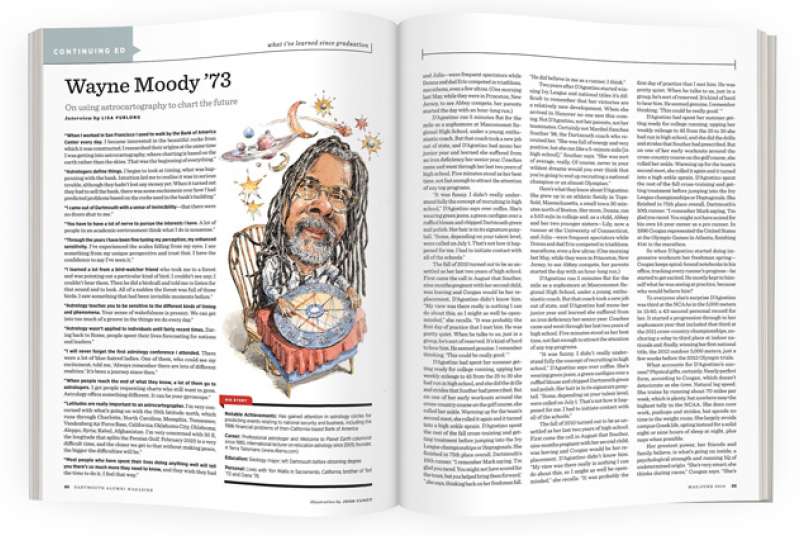 An astrologer on using astrocartography to chart the future.
INTERVIEW BY LISA FURLONG | Mar - Apr 2014

Notable Achievements: Has gained attention in astrology circles for predicting events relating to national security and business, including the 1986 financial problems of then-California-based Bank of America

Personal: Lives with Yon Wallis in Sacramento, California; brother of Ted ’72 and Dana ’76

“When I worked in San Francisco I used to walk by the Bank of America Center every day. I became interested in the beautiful rocks from which it was constructed. I researched their origins at the same time I was getting into astrocartography, where charting is based on the earth rather than the skies. That was the beginning of everything.”

“Astrologers define things. I began to look at timing, what was happenning with the bank. Intuition led me to realize it was in serious trouble, although they hadn’t lost any money yet. When it turned out they had to sell the bank, there was some excitement over how I had predicted problems based on the rocks used in the bank’s building.”

“I came out of Dartmouth with a sense of invincibility—that there were no doors shut to me.”

“You have to have a lot of nerve to pursue the interests I have. A lot of people in an academic environment think what I do is nonsense.”

“Through the years I have been fine tuning my perception, my enhanced sensitivity. I’ve experienced the scales falling from my eyes. I see something from my unique perspective and trust that. I have the confidence to say I’ve seen it.”

“I learned a lot from a bird-watcher friend who took me to a forest and was pointing out a particular kind of bird. I couldn’t see any; I couldn’t hear them. Then he did a birdcall and told me to listen for that sound and to look. All of a sudden the forest was full of those birds. I saw something that had been invisible moments before.”

“Astrology teaches you to be sensitive to the different kinds of timing and phenomena. Your sense of wakefulness is present. We can get into too much of a groove in the things we do every day.”

“Astrology wasn’t applied to individuals until fairly recent times. Dating back to Rome, people spent their lives forecasting for nations and leaders.”

“I will never forget the first astrology conference I attended. There were a lot of blue-haired ladies. One of them, who could see my excitement, told me, ‘Always remember there are lots of different realities.’ It’s been a journey since then.”

“When people reach the end of what they know, a lot of them go to astrologers. I get people requesting charts who still want to grow. Astrology offers something different. It can be your gyroscope.”

“Latitudes are really important to an astrocartographer. I’m very concerned with what’s going on with the 35th latitude north, which runs through Charlotte, North Carolina; Memphis, Tennessee; Vandenberg Air Force Base, California; Oklahoma City, Oklahoma; Aleppo, Syria; Kabul, Afghanistan. I’m very concerned with 50 E, the longitude that splits the Persian Gulf. February 2022 is a very difficult time, and the closer we get to that without making peace, the bigger the difficulties will be.”

“Most people who have spent their lives doing anything well will tell you there’s so much more they need to know, and they wish they had the time to do it. I feel that way.”