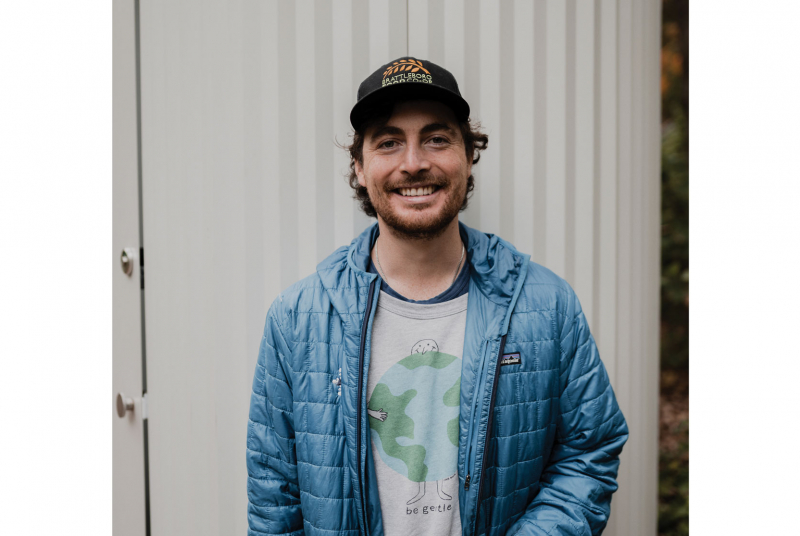 “It's a big vision,” says Tyree of his expansion plans. Investors agree. (Photo by Griffin Mims)
Voices in the Wilderness

Tyree’s travels to remote wilderness areas from Patagonia to the Arctic ingrained in him the ethos of “leave no trace.” He also discovered a waste-disposal crisis in otherwise pristine backcountry settings—including pit toilets that foul water resources and huge piles of human sludge. In 2020 he and friends Thor Retzlaff and Taylor Zehren cofounded Wasted*, a sustainable waste management startup.

They’ve created pleasant-to-use portable toilets that separate liquids and solids, which makes the waste less energy-intensive to treat. In October, Wasted* held a pilot demonstration with a prototype at the Brattleboro, Vermont, farmers market and collected waste for the Rich Earth Institute, which has conducted 10 years of agricultural field trials on the safety and effectiveness of urine-derived fertilizer.

“Urine is really rich in micronutrients—nitrogen, phosphorous, and potassium—used to fertilize crops,” says Tyree, a computer science and philosophy major who lives in Vershire, Vermont. “This is ancient wisdom. It’s inefficient and silly to mine and ship those same nutrients from halfway around the world when we can just harvest them from pee.”

Wasted* plans to install and service 15 portable toilets in Burlington, Vermont, this summer—at construction sites, small events, and public settings—and to launch a larger operation in Boston in summer 2023.

Last summer, Tyree and his partners won both the investor prize and audience prize at a Dartmouth Angels Startup Showcase, and a group of Dartmouth alums invested. “I believe that they have tremendous potential to be a successful business that can change the world,” says Dartmouth Angels cofounder Mark Bernfeld ’78. “They’re wonderfully driven. They have entered a space that really is almost shockingly overlooked. This is a team that has a chance to get it done, which is why I’m so excited about it.”