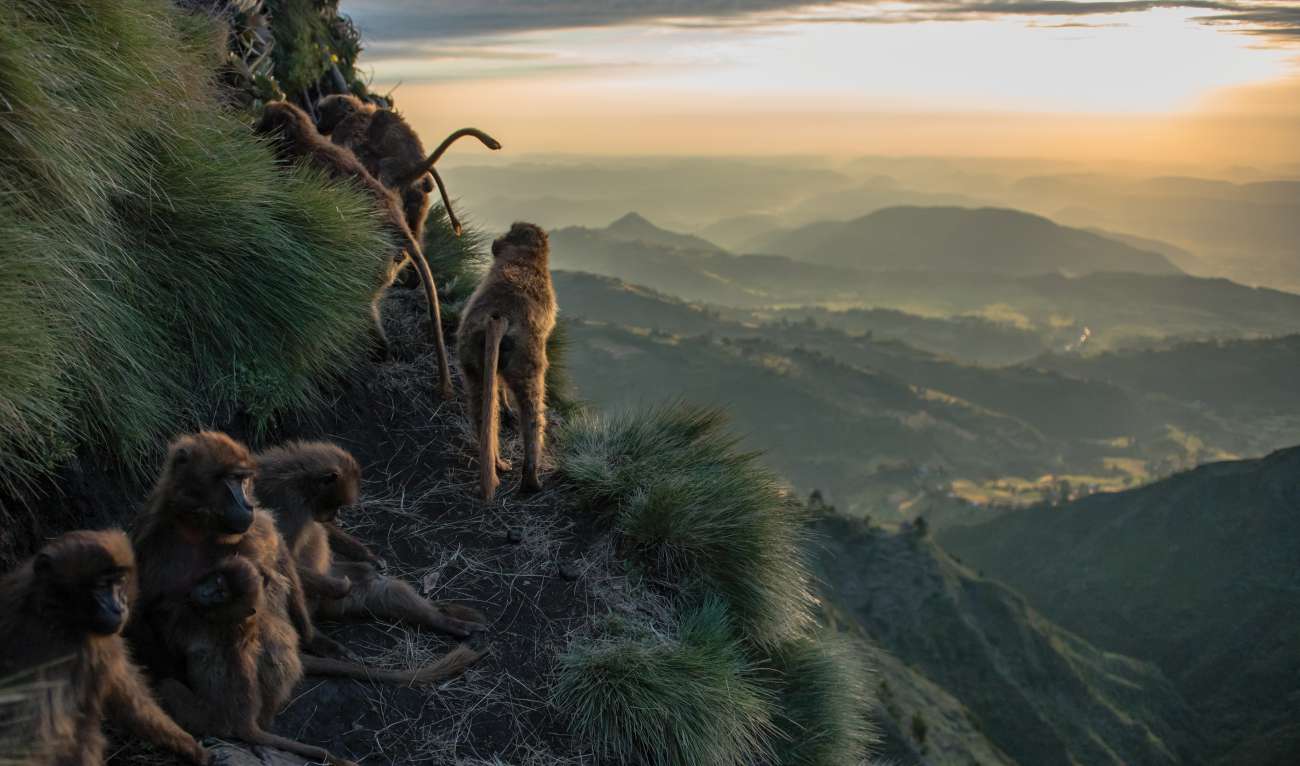 On a grassy plateau in the central Ethiopian Highlands, thousands of feet above the Great Rift Valley, Kerby discovered the power of images to enhance both research and storytelling. He traveled to the region in 2011 with anthropologist Vivek Venkataraman, Adv’16, to join scientists at the Guassa Gelada Research Project on an expedition to document the interactions of Ethiopian wolves and gelada monkeys, the world’s only grass-eating primates. Kerby returned from the National Geographic-funded trip with more than 20,000 photos, some of which he presented at the magazine’s headquarters in Washington, D.C.

“The senior natural history editor told me, ‘Don’t just focus on pretty pictures of monkeys. That’s not a story. Make sure you get behaviors—those are interesting.’ That advice stuck with me,” says Kerby. “You can’t just take a bunch of nice pictures and expect someone else to tell the story for you. That’s at the core of your job as a photographer.”

With the encouragement of photojournalist mentors and Nat Geo staff, Kerby continued to develop his camera skills in the field. He captured dramatic shots of gelada monkeys during moments of play, aggression, birth, rest, and death. After a few additional trips funded by National Geographic Society grants, his pictures were published in a feature article in the April 2017 issue of the magazine.

“Photos are great for telling stories, but they’re also fantastic sources of scientific data,” says Kerby, whose research as a postdoctoral fellow in Dartmouth’s Neukom Institute for Computational Science examines the impact of climate change on the ecology of Arctic tundra. “I use drones to spy on natural landscapes as they change. You can use technology to tell a story that’s beyond what humans can observe on their own, for example, by making a 3-D model that captures the thawing of permafrost over a huge area and several years.”

For the past three years Kerby has joined the environmental studies foreign studies program in southern Africa to assist undergraduates with landscape mapping and analyses using drone photography. Back in Hanover, students have pulled data from videos of robots in a BattleBot-esque arena as part of an exercise that explores animal behavior and landscape patterns in Kerby’s upper-level course, “Spatial Thinking in Ecology and Conservation.”

Recently Kerby cofounded the High-Latitude Drone Ecology Network, a group of researchers from across Eurasia and North America who share field expertise and develop protocols for landscape mapping in challenging northern environments. He’s optimistic about the potential of drone photography as a tool for science. “There’s a lot of opportunity to shift how we’re looking at climate change in the Arctic,” he says. “How can we revisit this challenge from a new perspective? Sometimes you have to bring new tools to old problems. That’s when the most powerful advances happen.”

You May Also Like
Extreme Exposure
Adventure photog goes deep.
Remnants of a Moment
Photojournalist Mackenzie Knowles-Coursin ’07 explores notions of identity and place in conflict zones where statelessness and forced migration prevail.