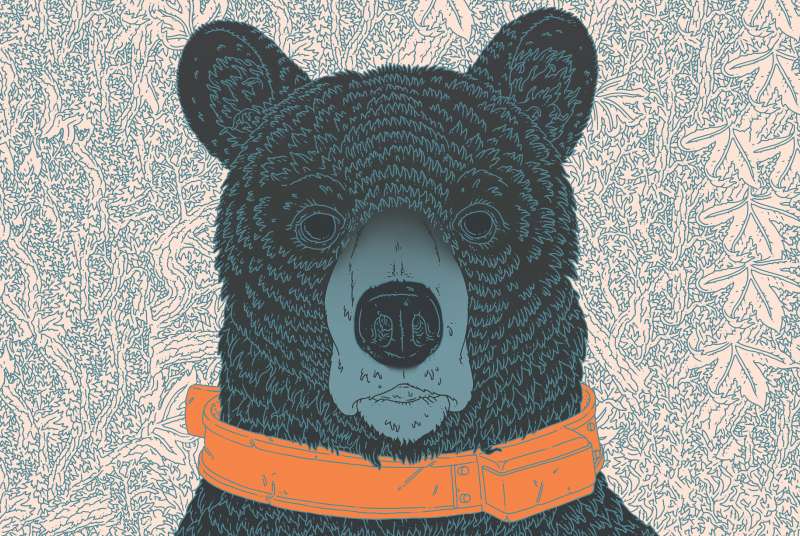 Poor Mink. She’s acquired three trappings of civilization no wild animal needs or wants: a name, a bright orange collar, and a Facebook following. She’s joined a circus she never wanted to be part of.

In 2017 this female black bear, habituated to humans in Hanover, received a death sentence from the New Hampshire Fish and Game Department. Officials deemed the sow and her three cubs a nuisance because they ate from trash cans and birdfeeders in town and on campus. Media coverage raised a furor among locals. The governor stepped in with a stay of execution.

The following spring wildlife experts captured Mink, as she was now called, and fitted her with a tracking collar. Then they trucked her 120 miles north and deposited her near the Canadian border.

This spring she returned, traveling  more than 1,000 miles—crossing highways several times—to zig and zag her way back home. Soon she showed up on social media feeds of professors and administrators. Would Fish and Game officials get trigger happy again?

Mink answered the question by quietly returning to the woods surrounding Hanover. In June she didn’t appear in backyards or online. While her future remains uncertain, trackers report she’s remained in the forest, perhaps looking for a mate. That’s a good thing. “As long as she stays out of trouble she will be left alone by us,” Fish and Game executive director Glenn Normandeau told local media. “We can only hope the public will not do things that induce her to become a problem, like feeding. If an issue does arise, we will collectively decide the best way to proceed.”

Feeding? Turns out Mink’s troubles began years ago with some donuts. Ben Kilham, a licensed wildlife rehabilitator in Lyme, New Hampshire, who helps monitor Mink, says an elderly man (an alum who is now deceased) tempted the bruin with crullers from Lou’s—and black oil sunflower seeds. Not once in a while, but every morning. Kilham describes this original sin as part of a town that was “out of control with unsecured garbage, birdfeeders, and dumpsters without steel tops.”

Conditions, at least on campus, have improved. Dartmouth has been “tremendously impactful” in minimizing attractants and garbage, says Hanover deputy fire chief Michael Hinsley. Mink’s initial appearance spurred a new bear awareness. The organic farm now has electric fencing. Some dumpsters have been reinforced, while others have disappeared entirely. Bears rarely roam campus, even though 10 sows are known to reside in the Hanover area.

Hinsley would like to see town residents follow suit. He tracks the travels of several town bears via reported sightings and photographs, often at birdfeeders or near garbage, and he knows which neighborhoods—some that are home to College employees—aren’t up to snuff. “It takes only one home with an attractant to affect all of your neighbors,” he says.

And a bear named Mink.