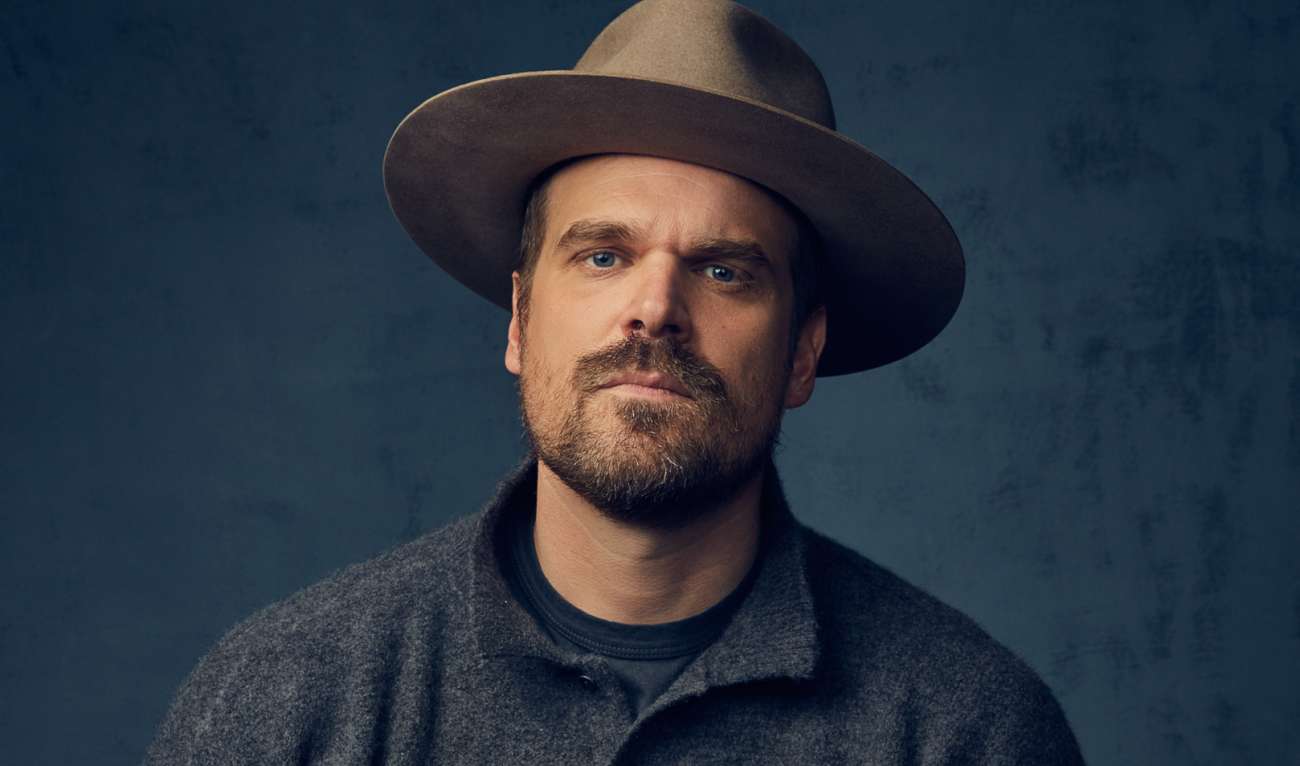 Before making it big as a monster hunter on the Netflix smash Stranger Things, David Harbour ’97 had to fend off a few demons of his own.
JENNIFER WULFF ’96 | Jul - Aug 2017

How’s this for commitment to his art? Lunging too far on stage one night last summer while playing Greek warrior Achilles in a Shakespeare in the Park production of Troilus and Cressida, David Harbour actually tore his Achilles tendon. So when he says the only reason he’s smoking right now is because the brooding chief of police he plays on the hit series Stranger Things also does, it’s not such a stretch to think he might be telling the truth. “I eat a lot of donuts, too,” he says with a smirk. “It all helps me embody the character.”

With his iconic role in Netflix’s sci-fi horror sensation, which centers around the disappearance of a boy from a 1980s Midwestern town into a dark and terrifying underworld, Harbour is suddenly in a new realm himself. “It’s definitely exciting,” says the actor, 42, who also got rave reviews for his fiery call-to-arms speech at January’s Screen Actors Guild Awards (with an overly expressive Winona Ryder at his side) when the cast won the best ensemble in a drama award. “I had a real cynicism about Hollywood before this, but now it feels like I’m in a little more of a place where I can pick and choose what parts I want to play,” he says.

Not that he’s had a bad run. Through the years he’s been cast in TV shows such as The Newsroom and Elementary and films such as Brokeback Mountain, Quantum of Solace and last year’s Suicide Squad. The self-described “theater rat” has also had great success on Broadway, even earning a Tony nomination for his 2005 turn in Who’s Afraid of Virginia Woolf? Still, the phenomenon of Stranger Things has propelled the 6-foot-3-inch actor to new heights. Up next he’ll get demonic as Hellboy in a 2018 reboot of the comic book series.

Sitting outside a coffee shop near his apartment in Manhattan’s East Village, Harbour, in a worn leather jacket and baseball cap, takes a drag from the cigarette he’s masterfully rolled and marvels at his good fortune of late. As if on cue, shortly after I ask him if he’s often recognized now, three young women approach. After a series of oh-my-Gods and is-it-really-yous they gush about his skills. “You’re amazing,” one says. “We’re in acting school and we talk about you all the time in class. Thank you for being so good!” Harbour wishes them well and says he’ll see them in the trenches soon. “I know,” he says to me as they continue on their way. “It’s ridiculous.”

Growing up in White Plains, New York, Harbour—who was a Dungeons & Dragons type, much like the boys on Stranger Things—says acting was not just a hobby but a necessity for him. “I had freakish ideas about the world and there were all these things I felt I couldn’t express,” he says. “But onstage I could, and people would applaud. It was a good outlet for me and made me feel sane.”

Even during his first time in front of an audience, as the Tin Man in a kindergarten production of Wizard of Oz, Harbour was a dedicated performer. “He not only learned his own lines perfectly,” says his father, Ken Harbour ’71, a commercial real estate broker, “but he learned everyone else’s too. You could see his little lips moving.”

A hard-working but troubled high school student, Harbour started drinking as a teen, going to bars after museum visits to Manhattan since he was rarely asked for ID. “I just had a lot of anger and fear and it manifested in ways I wasn’t mature enough to deal with,” he says. “So I self-medicated with alcohol.”

The habit became worse at Dartmouth, where the drama and Italian major was a member of Sigma Phi Epsilon. “Part of it might have been the goddamn weather. I’d look out the window at 9 a.m. to see three feet of snow and thought it would be a better idea to skip class and drink peach schnapps,” he says. “I just wanted to create this void to destroy myself. But that kind of drinking is a tremendous form of narcissism. You don’t realize you’re affecting other lives. You think, ‘F--- you, I’m not bothering anyone.’ But no. You’re a son, you’re a friend, you’re a boyfriend. You have these responsibilities. You are not so special that you can’t be part of the world.”

After reaching a point of becoming “very lonely and needing a different direction in my life,” Harbour says, he quit drinking 15 years ago and has no interest in taking it up again. “I just can’t do it. It’s not for me,” he says. “I enjoy consciousness too much now.”

Longtime friend and fellow actor Marsha Stephanie Blake ’96 says that Harbour, whose idea of a great time now is taking his young nephews to the American Museum of Natural History, is a very different guy than he was at Dartmouth. “Over time he’s figured out how to be a great actor without getting so much in the way of being a good person,” says Blake, who has had roles on Girls and Orange Is the New Black. “It’s wonderful to see how much he’s matured and how his talent has grown.”

Despite his recent star turns, Harbour, who wowed audiences in Macbeth and Hamlet at Dartmouth, admits that acting is not the easiest path, “especially in the Facebook world, where you see friends making money and getting married and having kids, and you’re just like ‘what the f--- am I doing?’ ” he says. “You feel like a freak and an outcast.”

It’s definitely not a career for the weak, says Rachel Dratch ’88, who worked in an off-Broadway comedic reading series with Harbour. “Usually an Ivy League education opens doors, but in acting, it really doesn’t help,” she says. “No one is impressed you went to Dartmouth. They just want to know if you’re good. Fortunately, David is. I’m so happy to see him strike it big with a wider audience.”

Right now Harbour is gearing up for a flight to Atlanta, where Stranger Things films. Alas, despite much begging on my part, he won’t offer any hints about the nine new episodes, which fans can binge on when they’re released October 31. “I’m not telling you a thing or I’ll get in trouble,” he says. “Oh, except that Barb is definitely dead.” Dramatic pause. “Or maybe she’s not.” There’s that smirk again as Harbour wanders off into the night.

Jennifer Wulff is a DAM contributing editor. She lives in Wilton, Connecticut.