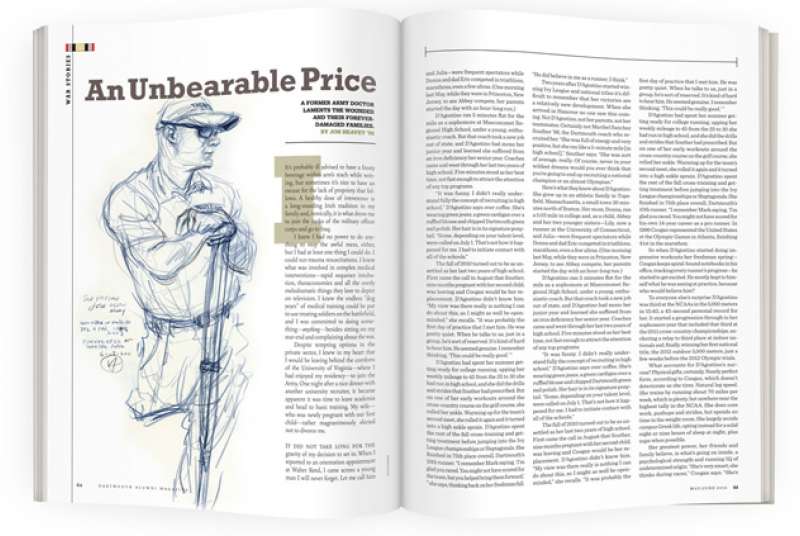 It’s probably ill advised to have a frosty beverage within arm’s reach while writing, but sometimes it’s nice to have an excuse for the lack of propriety that follows. A healthy dose of irreverence is a long-standing Irish tradition in my family and, ironically, it is what drove me to join the ranks of the military officer corps and go to Iraq.

I knew I had no power to do anything to stop the awful mess, either, but I had at least one thing I could do. I could run trauma resuscitations. I knew what was involved in complex medical interventions—rapid sequence intubation, thoracostomies and all the overly melodramatic things they love to depict on television. I knew the endless “dog years” of medical training could be put to use treating soldiers on the battlefield, and I was committed to doing something—anything—besides sitting on my rear-end and complaining about the war.

Despite tempting options in the private sector, I knew in my heart that I would be leaving behind the comforts of the University of Virginia—where I had enjoyed my residency—to join the Army. One night after a nice dinner with another university recruiter, it became apparent it was time to leave academia and head to basic training. My wife—who was newly pregnant with our first child—rather magnanimously elected not to divorce me.

It did not take long for the gravity of my decision to set in. When I reported to an orientation appointment at Walter Reed, I came across a young man I will never forget. Let me call him Soldier One. It looked like half of Soldier One’s face had been blown off, and he was missing both his right arm and his right leg. His left leg was locked in extension in his wheelchair with an exoskeleton-like fixator piercing through the skin into the underlying bones.

I’ve seen plenty of severe injuries in my work, so even though Soldier One had injuries that would be quite disturbing to most non-medical people, that wasn’t what struck me about him. What hit me was the family walking next to him, and the tragedy of their lives. Soldier One looked to be no more than 19 years old. He had an impossibly young wife trailing behind his mechanized wheelchair, and she was carrying not one but two children. Both he and his wife were covered in tattoos and body piercings that spoke to their hardened young lives. As desperately as I wanted to mitigate his suffering, I had no idea how impossible that was when his whole world had been shattered.

After my time in the infantry in Iraq, I came to appreciate Soldier One’s sacrifices in a much more personal way. When I returned from combat to Walter Reed, I was stunned to see senior officers walking around without a combat patch on their uniform. They literally looked naked to me. In an infantry unit, a colonel with no combat patch would be laughed off base. Yet at Walter Reed it was the norm. Unfortunately, even after congressional inquiries, this hasn’t changed at either Walter Reed or the Office of the Surgeon General. Not only have commanders who oversee the direct care of our wounded soldiers never been deployed to a war zone where their medical skills could have been honed, they are also handicapped by lack of first-hand knowledge of their patients’ war experiences.

How do you help Soldier One when the only thing he sees with his one remaining eye is a commander who has never been to war? How do you set the medical rules of engagement policies that restrict our ability to treat children in the war zone if you don’t know what the realities of war look like? How can you lead our wounded warriors if you’ve never seen a friend die in a blast?

I often find myself wondering where Soldier One is now. I wonder where his wife and daughters are. I wonder if he can feed himself or walk with prosthetics. I wonder if he hates me and hates us for what our country has done to him. I wonder about his life as I sit in beautifully sheltered classrooms in business school, evaluating revenue metrics on companies that have made hundreds of billions of dollars in profits from the war. Soldier One will never be involved in executive business decisions or international policy analysis. He doesn’t need to sully himself with that kind of bulls***. Yet he will always know exactly what he is missing in his life, no matter how the balance sheet equations are calculated. For all his valor and incredible bravery, he will never profit one penny—he will simply pay an unbearable price.

Much like the gut reaction I had when I saw Soldier One, the lessons I learned in Hanover stayed with me throughout my time in the military. Dartmouth taught me the exact opposite of war, and for that I will always be grateful. Dartmouth taught me to look at the world through a lens filled with limitless and exciting possibilities. It taught me that humans are good, and that we can accomplish anything we set our minds to. It taught me that we need each other’s love and friendship to get through this crazy D-Plan of life together. It was that kind of camaraderie that kept me alive during my deployment.

My friends from Dartmouth not only sent me care packages, far more importantly, they took action about the front-line realities. They listened when I spoke about friends in my unit who were traumatized like Soldier One. They listened to my experiences with institutional procedures that ran counter to the realities on patrol. And, perhaps most critically, when medical rules of engagement policies prevented me from evacuating children for surgery, it was my friends from Dartmouth who helped. Rachel Gilliar ’98, Scott Jacobs ’99, Kristen Hinman ’98, “Case” Dorkey ’99 and countless others helped provide legal and other advice to form a nonprofit foundation. What’s more, President Jim Wright, Linda Kennedy, Ed Boraz, Drs. Mitch Stotland and John Butterly, Amin Plaisted, Nahid Tabatabai and a host of Dartmouth community leaders helped provide reconstructive burn surgery to a little girl who was severely injured in the war. At the time, I don’t believe I had written to most of those community leaders in almost a decade. Yet to a person—including some whom I had never met—they dropped everything they were doing to make a miracle possible.

I credit Dartmouth, where they teach you that no matter how profound a depth of darkness you may find, you can always build a better tomorrow.

Jon Heavey served almost four and a half years in the Army and deployed to Iraq from October 2007 to December 2008. While there he helped establish Hope.MD, a foundation to bring wounded children to the United States for care and surgery free of charge. While earning an M.B.A. at Yale last year he wrote The Guardian Class, from which this story is excerpted with permission. At Dartmouth Heavey rowed heavyweight crew and served as president of Student Assembly. He is now director of business development at Cleveland Clinic Innovations.