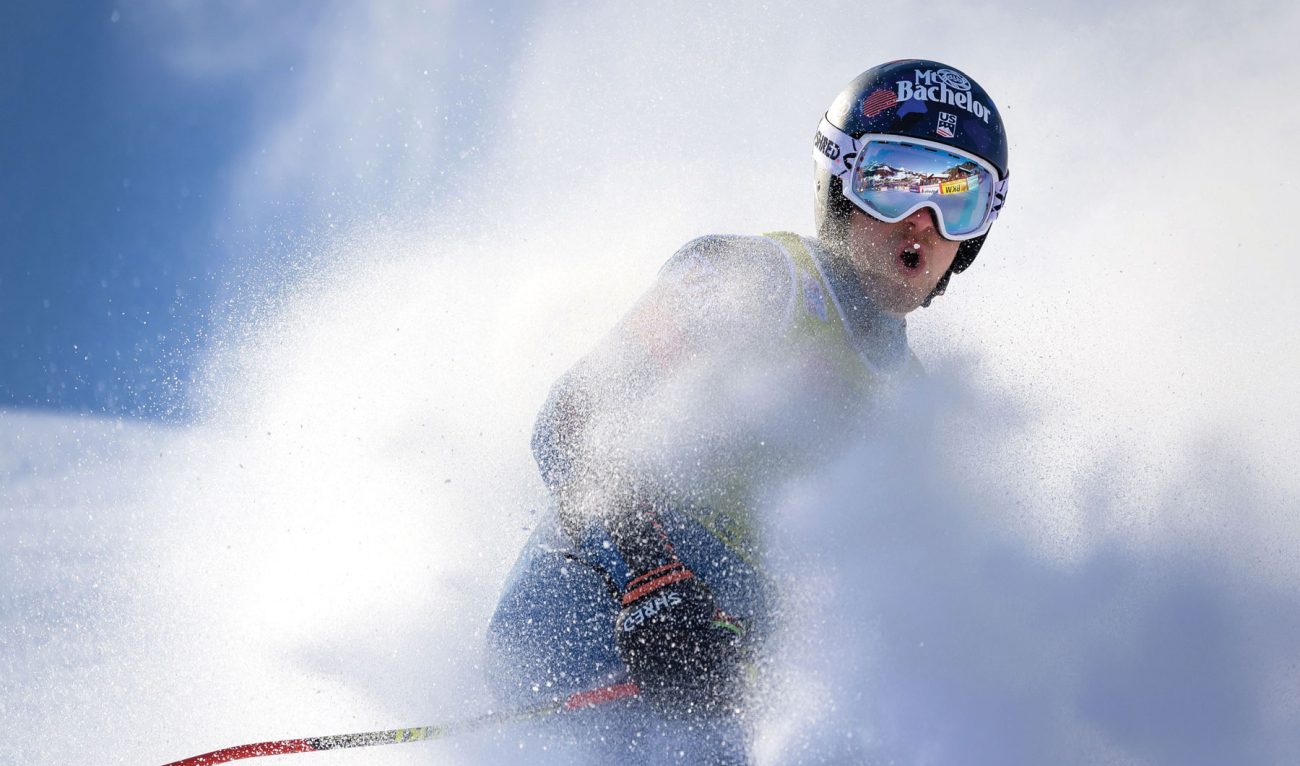 On the Comeback Trail

Skier Tommy Ford ’12 looked like a sure bet for an Olympic medal. Then a brutal crash put everything in doubt.
Bill Gifford ’88 | January-February 2022

Tommy Ford is lining up his first shot on the driving range when the lady in the next stall notices his shirt. “Steadman!” she says, referring to a well-known Colorado orthopedic surgery clinic. “Did you get surgery there?”

Ford cringes. “Several surgeries,” he says with a rueful smile.

Yes, he is. She is impressed to learn that he is on the U.S. alpine ski team and skis in World Cup races. Her curiosity grows. He politely but shyly answers her questions as his ball waits on the tee.

“Now I want to see you swing,” she says, in heavily accented English. “You are a world-class athlete, you must be good!”

He steps up to the tee, focuses for a second, and swings. The ball hooks left.

It’s early October, and Ford is in Park City, Utah, for two weeks of strength training and physical therapy on his right knee, which he injured in a bad crash in the final gates of a giant slalom race last January. The crash knocked him out, smashed the top of his right tibia, and shredded almost every knee ligament you could name. He was evacuated from the hill via helicopter. That put an end to his 2020-21 season and raised a cloud over his future, including this year’s Winter Olympics in Beijing.

Before the crash, Ford would have been considered an automatic medal contender in giant slalom, his specialty event, where he was ranked fifth in the world (and the top American). It had taken him a long time to reach that level: A decade elapsed between his international debut at age 20 and his first World Cup win, in December 2019 at Beaver Creek, Colorado. Now 32, he’s struggling to regain strength in a right knee slashed with two long surgical scars, courtesy of Steadman Phillipon doctors. (The institute, for better or worse, is among Ford’s sponsors.)

“He’s getting stronger,” says Will Courtney, a U.S. Ski Team strength and conditioning coach who has joined him on the driving range today. “He’s got the skiing part down.”

It’s not a surprise that Ford became a ski racer—it’s the family business. His father is former Dartmouth men’s alpine coach Mark Ford, while his mother, Mary Ellen Ford, coached women at the University of Vermont. The family moved to Bend, Oregon, where Tommy was born in 1989. Almost as soon as he could walk, his parents recall, he was tromping around the house in the boots of his older brother, Tyson, pretending to ski. He soon got his own boots, with skis, and joined the local youth ski team at Mount Bachelor, where his mother was his first coach. “I had a great group of kids who would chase each other around the mountain in a pack,” she says. “It was so much fun to watch them grow and learn from each other.” His longtime girlfriend, Laurenne Ross, who recently retired from the U.S. Ski Team, was in that pack of kids.

His parents were careful not to push him into skiing too hard. “To be honest, we made it a point not to talk about skiing or how to turn or this and that very much with Tommy,” says his father. “We would remind each other to shut up and just enjoy the day, the snow, the sun, being in the mountains—anything other than how to make a turn or how to ski.”

The goal was to teach him to love skiing. It worked. Ford began winning races as a teenager, and he placed fourth at the junior world championships in 2008. He entered Dartmouth that same fall, but the U.S. Ski Team came calling during his freshman year, so he found himself skiing on the European circuit rather than in NCAA carnivals.

Beijing would be his third Olympics. He finished 26th in the giant slalom in 2010 and 20th in the 2018 games in South Korea.

“Tommy’s got the goods, man. He’s such a clean skier. He’s got the feel and the elasticity in his body. I don’t think you can teach that.”

“Tommy’s got the goods, man,” says U.S. men’s alpine head coach Forest Carey. “I saw him ski when he was 18, and he didn’t make any noise when he went by. He’s such a clean skier. He’s got the feel and the elasticity in his body. I don’t think you can teach that.”

His early promise soon plateaued. In 2013 Ford was ranked in the top 50 in giant slalom when he broke his leg freeskiing in France (requiring another helicopter evac). He was out for the entire 2014 season, an Olympic year, and part of the following season as well. Making the most of the time, he returned to campus for three straight terms and completed his major in studio art, which he found helpful as he recovered from his injury—especially sculpture. “It was the closest thing I could get to skiing,” he says. “You’re moving and you’re working and you’re present. It was like a sport to me in a lot of ways.” (Ford has four terms remaining to complete his degree.)

When he came back to skiing, Ford struggled for a couple of seasons. Then something unexpected happened: He got better. Top-30 World Cup finishes turned into top-10s. Ski racing is a sport of hundredths of seconds, where tiny errors can knock you out of contention. At the PyeongChang  Olympics in 2018 he laid down the sixth-fastest second run but finished 20th overall because of a slow first run.

As he gets older, Ford realizes that mistakes offer opportunities to learn. “Sometimes a mistake puts you in a good line,” he says, taking a break from hitting golf balls. “This line I’m skiing these days came from a mistake. I got thrown and went straight, and I had to sort of put my hip back to make the turn. I learned how to clear the gate and have a tighter arc.” He could ski straighter—and faster—through the gates.

The mistake led to a breakthrough at the Beaver Creek World Cup race in 2019. He skied the fastest first run, which meant that he would ski last for his second run. He also knew there was no guarantee of anything. To win a giant slalom requires two near-flawless runs, back to back. Standing in the start gate, he could hear the home crowd cheering far below—and he could feel their energy like a physical force. “It was tough to stay grounded,” he says. “Coming through the course you could feel the pulse of them, their excitement. I was like, whoa.” He won by nearly a second, his first World Cup victory after a decade on the team.

Despite what he was feeling, to watch his winning run now is to be struck by how calm and composed he seemed as he arced through the gates totally in control. The win placed him, at long last, among the top skiers in his discipline, someone with a clear shot at a medal in Beijing, if he qualifies. He won’t know until a few weeks beforehand. Team selection is based on current race results, so he’ll need to come back and race well to win a spot. Now, in early October, he has opted to skip the first few races of the season to rebuild his strength.

“It’s not an easy road back, I can’t sugarcoat it—his injury was brutal,” says Carey, “but he’s doing the work and he’s confident and we’re confident he’ll get back and be ready to fire by Beijing.”

Back on the range in Utah, Ford is not thinking about the Olympics. Instead, he’s trying to master his three-wood, a sleek metal-headed club that has bedeviled him since he picked up golf again a few months ago.

The golf was a suggestion from his Austrian-based “mental coach,” Bernard Payet, with whom Ford has been working for the past six years. Ford credits Payet, who also works with teammate Andrew Weibrecht ’09, with strengthening his mental game on the mountain. He thought golf would be a good way for Ford to work on maintaining his focus, from shot to shot or turn to turn. “The hard part is consistency,” Ford says.

The clubs are old—his late grandfather’s. “He taught me to play when I was a kid,” Ford says. “He’d say, ‘Hang up the skis, golf is where the money is!’ ”

It’s too late to change course. Still, it would be nice to master the cursed game—or at least hit a decent wood shot now and then. And maybe beat his coaches. He lines up squarely before the ball, bending his knees into a powerful athletic stance. In the distance, bright yellow aspens paint the mountainside.

Slowly he draws the club back, wrapping it around his body, then unwinds with a whoosh and a plink!

The ball rockets toward the aspens, long and sure.