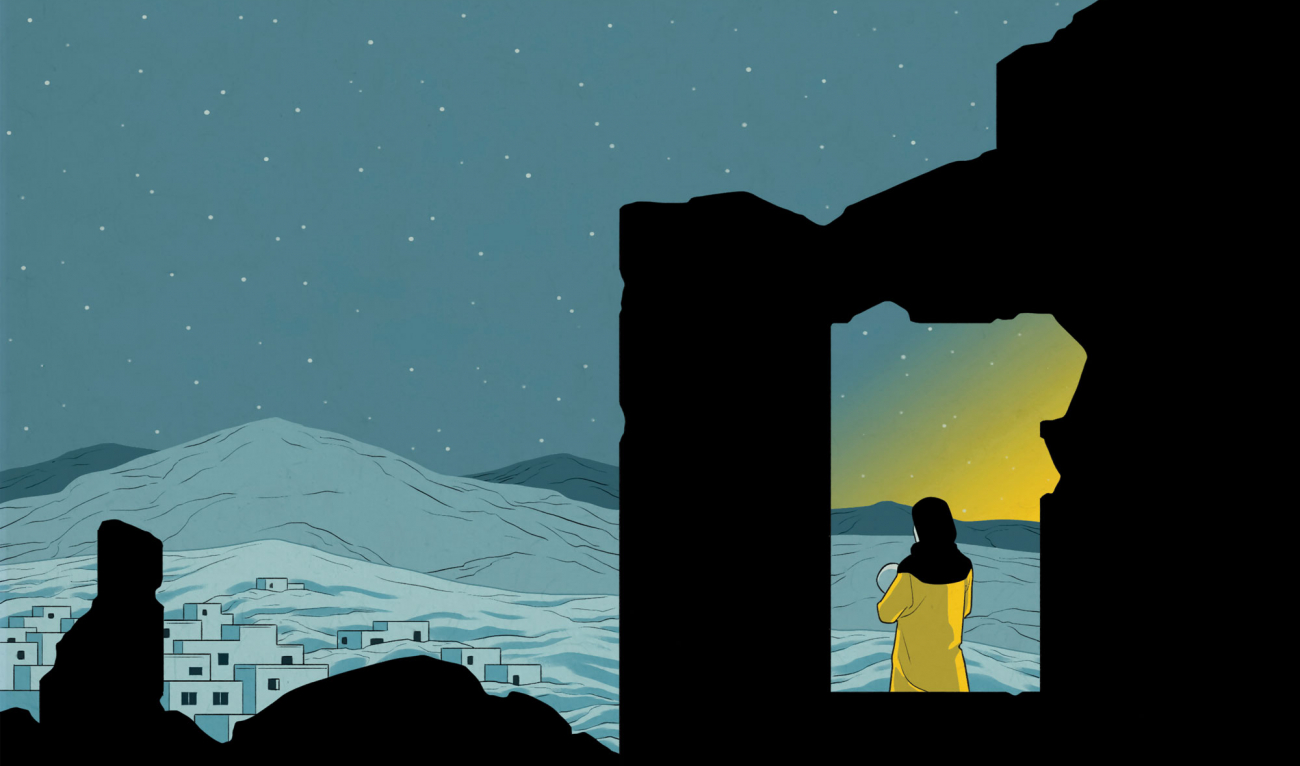 Illustration by Anuj Shrestha
“The greatest lesson I have learned... some things are worth giving up everything for,” says Tom Villalón.
Features

Escape From The Taliban

On August 26, 2021, Safia lay in a puddle of sewage outside Hamid Karzai International Airport in Kabul, Afghanistan. A suicide bomber had blown himself up, knocking the young soldier-in-training to the ground. As Safia opened her eyes, she was relieved to discover she was still holding her husband’s hand and that both of them were alive and intact. She staggered to her feet, and muck dripped off her body. There would be no getting out of the country that afternoon, or perhaps ever, for thousands of fleeing Afghan citizens. “I lost all hope,” says Safia, 22, speaking in Dari through an interpreter. “Afghanistan would never be the same.”

Kabul fell to the Taliban on August 15 that year as one of the largest airlifts in history was getting under way. Taliban forces had toppled the pro-Western republican government that the United States and its allies had supported for two decades, setting off frantic scenes at the airport. More than 120,000 people boarded planes before the last Western aircraft left the country on August 29. Thousands were left behind.

Safia spent the next year on the run from Taliban officials, including a stretch spent hiding in caves. Thanks to help from an unlikely source—a corporate attorney named Tom Villalón—Safia, her husband, and their infant daughter managed to escape from Afghanistan and sneak across the border to Pakistan last fall. They now are trying to immigrate to the United States.

Safia’s chance at a fresh start came courtesy of Rescue Afghan Women Now (RAWN), a secretive, small but determined volunteer group of American business executives, including cofounder Villalón. RAWN raises money and pulls well-connected strings to extricate women who served in Afghanistan’s former military. Taliban officials have targeted these veterans, according to Villalón, sometimes with kill-on-sight orders, for collaborating with the enemy and having held jobs traditionally reserved for men, an affront to the fundamentalist regime.

RAWN, which came together last June, has compiled a list of about 160 women considered endangered, though the number fluctuates as some vanish and are believed to have been killed, according to Villalón. He has taken time off from his legal career to assemble a deep network of ex-military officers and aid workers to help evacuees with visas, living expenses, and evacuation costs. By early November, he had drummed up about $30,000, mostly through a GoFundMe account. (It costs about $3,000 to support each woman for a year.) Progress has been slow. As of early November, RAWN had freed nine people—six female soldiers or military officers, plus family members.

The Taliban use various technologies to track former government soldiers and those who help them, according to Villalón, so for security reasons RAWN can’t be fully transparent. “We just try to focus on the wins,” he says. RAWN asks that the women be referred to by only their first names. Specifics about rescues, such as how the women evade Taliban border guards, are shared on only an off-the-record basis, making it impossible to verify details. The rescue efforts take place quietly. Discussions take place over encrypted channels. Although RAWN moves carefully, requiring all the women to have proper passports before setting out, its leaders recognize that time is not on their side. “A lot of these women are being executed at a pretty alarming rate,” Villalón says.

“It’s not easy to be female and single,” Bashira, 25, another ex-soldier who escaped to Pakistan last summer thanks to RAWN, says through a interpreter. Fearing reprisals for housing a single woman, her landlord had evicted her soon after the Taliban reclaimed power—on the day Bashira hoped to graduate from army flight school. Bashira
scrambled back to her barracks to find it locked, then fled to a series of friends’ houses around the country.

Bashira’s ticket out came from Victoria, a U.S. Army captain who served in Afghanistan in 2017 and now handles operations and sustainment for RAWN. Victoria, who asked that her last name not be used in this story, served alongside Afghan women in the elite Female Tactical Platoon. Since the Taliban’s return, Victoria has tapped those sources to learn of other women in danger. She called Bashira last spring, told her whom to meet and where to go to get across the border, and sent her money from RAWN. By summer, Bashira was living with Safia and other RAWN evacuees in a house in Islamabad, Pakistan. 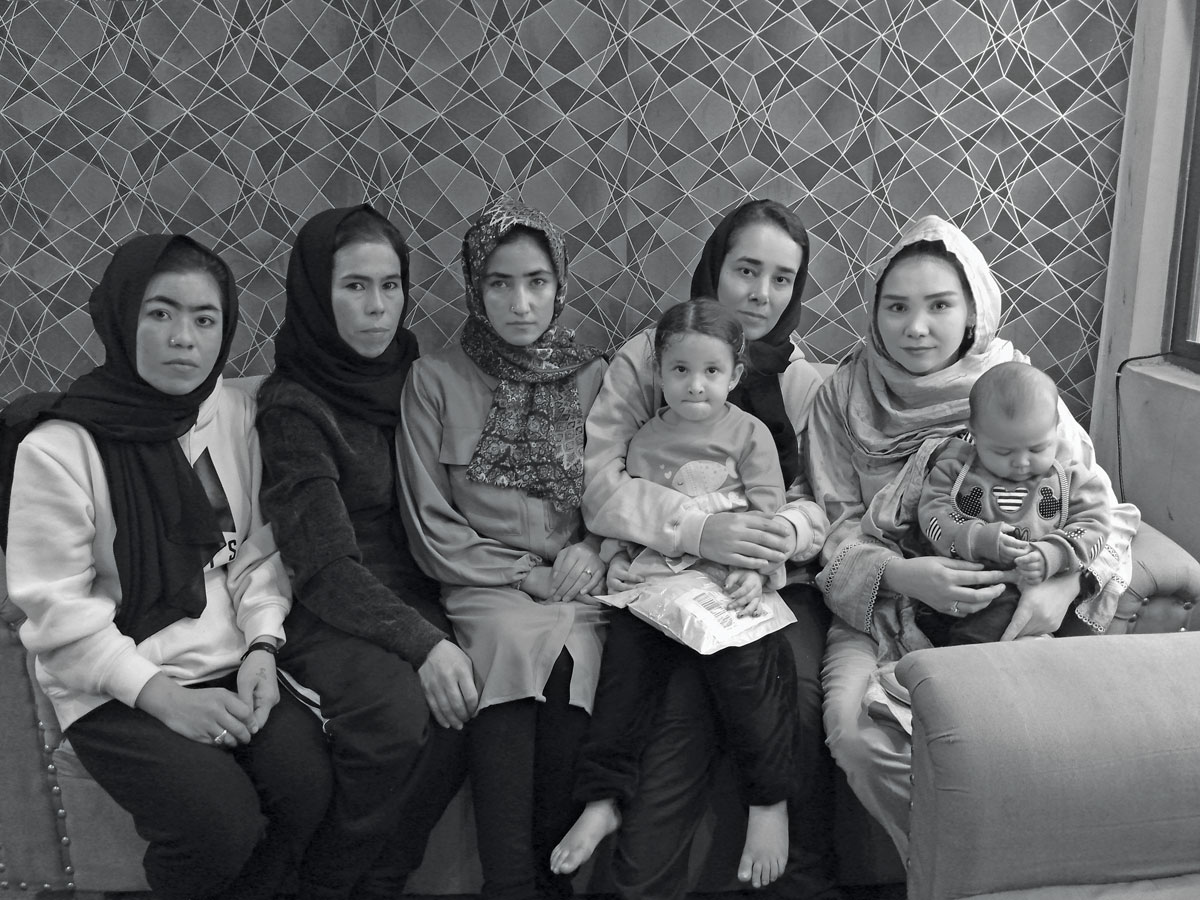 Five women who fled Afghanistan with the help of Villalón’s organization, including the three interviewed for this story, were photographed in Islamabad with two of their children in early November.

“It is the right thing to do, to help deserving people,” says Victoria, who orchestrates her complex missions from Hawaii. “I get that we can’t save everybody, and there are other deserving people in the world. But this population was fighting alongside American troops for 20 years, and that doesn’t go away.” Two of the women Victoria has rescued, including Safia, recently named their newborns after her.

If  Victoria’s work is a natural outgrowth of her military background, Villalón’s role might seem more accidental. A Chinese language major who grew up in Chile, Villalón was working for a New York law firm in early 2021 when a colleague asked him to represent an Afghan combat interpreter who was seeking a special visa. For months, the task involved routine paperwork. Suddenly, in August 2021, everything changed: The Taliban were sweeping across Afghanistan, hunting for anyone who had worked with Americans, and the interpreter’s family was in the crosshairs. “I was instantly disoriented, out of my depth. I felt as if I were leaning from the edge of some tall precipice,” Villalón says. “I hoped to pawn off this complicated problem to someone else.”

But a photo of the interpreter’s 6-year-old nephew raised the stakes. “I tried to wrap my mind around how someone, anyone, could kill a child,” Villalón says. “I decided, right then and there, I was going to get him out.”

Villalón taught himself Dari and Pashto through online webinars. He made a barrage of calls to ex-military types and international aid workers. “One day I was asked, in all seriousness, if I knew anyone with ‘fixed-wing assets in Uzbekistan.’ I laughed out loud to myself, thinking how far removed I am from a world in which I would casually know someone with fixed-wing assets in Uzbekistan,” he says. The next day his phone pinged with a separate thread from different sources who said they might indeed have fixed-wing assets in the region but needed fueling logistics. “My life had become a bizarre spy novel,” he adds.

Villalón managed to get 11 of the interpreter’s 14 family members across Afghanistan’s border into Pakistan in September 2021. He shared his news on an email thread for lawyers at top U.S. firms who knew people stranded in Afghanistan, usually clients’ family members. “As there was only bad news coming through that email thread during that time, my small success story generated a lot of interest,” he says. It also led him indirectly to Victoria. Villalón then pieced together the team that became RAWN.

This past fall, he and his wife, also a lawyer, planned to move to the East Coast so he could resume his legal career. He’s not sure what he’ll do going forward with RAWN but hopes that added exposure will help gain momentum. “The idea here was to create a sort of plug-and-play model, which I think we have accomplished,” he says. “Now that the model is up, we just need money to keep these women alive and rescue them.”

RAWN is not alone in working to extricate Afghans. Other groups include Task Force Argo, Project Dynamo, and Human First Coalition. Although each may have some degree of success, their impact can seem almost abstract until one faces a survivor and hears the details of an escape.

“I was scared to death when I was being questioned,” Marwa, 28, says through an interpreter. A former lieutenant in the Afghan air force, she was stopped while crossing into Pakistan last summer by officials who closely studied her passport. “I was scared the guards would recognize me,” she says.

Marwa speaks calmly and faces the camera during a Zoom interview, fiddling with her hajib as her daughter scampers just out of view. She is living with Bashira and Safia. But her composure falters when asked about a possible return home. “I would like it to be August 14, the day before the Taliban came to power,” Marwa says. She begins to shake with sobs, and her scarf falls from her head. “But I don’t see a future for myself in Afghanistan, because there is no future there. I’m eager for a new start in the United States.”

C.J. Hughes is a member of the DAM editorial board.