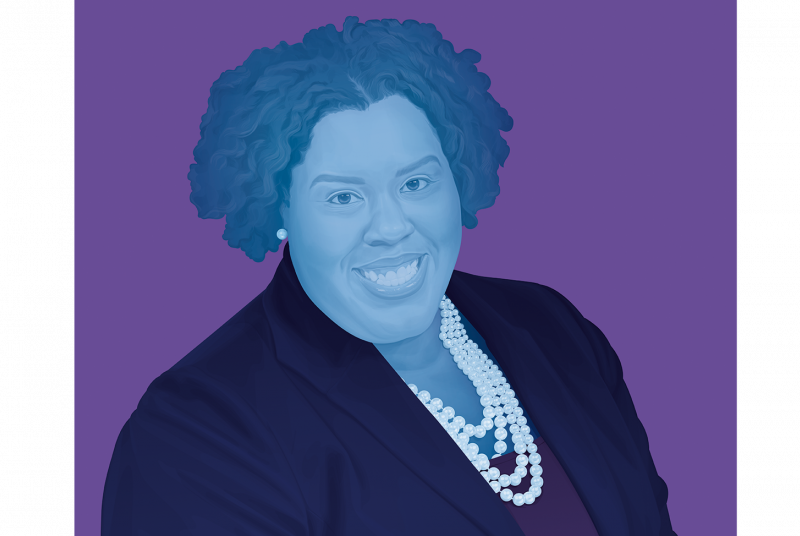 “Your Brain Is Wrong”

An expert on implicit bias explains how we can all see ourselves—and each other—more clearly.
Nancy Schoeffler | November-December 2020

Tiffany Harper ’05 is the first deputy treasurer, chief of staff, and general counsel with the Chicago treasurer’s office. A Latin American and Caribbean studies major who graduated from Washington University School of Law, she founded the Diverse Attorney Pipeline Program to prompt large firms to hire more lawyers of color. Her “passion project,” she says, is conducting training sessions on implicit bias, including one that she recently held for Dartmouth employees.

When and why did you develop these workshops?
I’ve been doing that work for at least the past six or seven years. I’ve done training on implicit bias, unconscious bias, and anti-racism in the workplace for a number of different kinds of entities, from large governmental agencies, law firms, and corporations to nonprofits.

What prompted your interest?
It grew out of a lot of things—it’s probably most inherent to who I am. My grandmother picked cotton in Mississippi. She was trying to get to a better life for us, to a place with more opportunity for Black people, more educational opportunities, something better than what she had. She boarded a train to Chicago with her six children, and in the next generation I became a Dartmouth grad. So clearly that was the right decision, to seek more resources, education, more opportunity. I see my work in diversity training as just that. People are seeking out more education, more opportunities to be more inclusive and have a more diverse workplace.

How do you define implicit bias?
You can have implicit bias about a number of things. I think that the one that is the most obvious is race, because it’s the one that you can see. Socioeconomic status and age, some other things, might be harder to tell, but race is on the face. You can look at someone and your brain automatically makes some assumptions. I often tell people that a lot of times your brain is wrong. You’re relying on things you’ve been taught by media. You’re relying on stereotypes. So how do you get past allowing your brain to make assumptions and trick you into making a snap-second decision about a person based just on race? That’s a lot of the training that I do, trying to get people to see past that. We’re still not really interacting with people of races different from our own on a daily basis yet. Our children are, but I’m talking about adults. We’re not.

You have said that everyone has implicit biases, favorable and unfavorable—and that we base thousands of decisions a day on them. Can you really retrain your brain or become more aware of what your unconscious is doing?
You can do both. It’s about changing your routine. The more experiences you have, the more data sets your brain has to rely on. For instance, I’m Black, I have a Black family, I have a Black son. And I spend a lot of time with Black people. But I also spend a ton of time with white people because I’ve worked in workplaces where I’m “the only.” And so I’ve been exposed to different thoughts, different cultures, different routines. My brain is not necessarily going to rely just on my Black experiences. Over time, if you broaden your experiences, if you travel to other countries, if you go to different restaurants for a type of food you’ve never had before, your brain is using all of those data sets to make a determination. If you truly want to retrain your brain, you have to have more diverse experiences. That will eventually change those unconscious decisions that you’re making. Your brain will say, “Hey, you might want to think about that, you might want to ask questions,” over time, as you broaden your experiences.

Are you finding a new eagerness in people to understand and talk about and adjust their views about race?
Yes. I think the vast majority of people will admit that as a country we haven’t done the work. And a lot of people are taking the first step to say, “I want to do the work.” That’s hopeful for me. They’re saying, “I’m not going to ignore it. I’m going to take a stand and make a choice and deal with my own issues and make the world better.” I have so much hope. It’s hard, though, because racism is not something that you are necessarily consciously taught. If you’re in the car with your mom and a Black man walks by and she locks the door, she didn’t have to say anything—but she taught you something.

I always encourage people to not take on the shame of racism. It just means you have to unlearn some things that you were subconsciously taught growing up in America.

What do you mean when you say we all have blind spots?
We all have areas of privilege in our lives, all of us, and those tend to be the areas where we have blind spots. Now, I’m not white, and so obviously my race is not a privilege, but I am heterosexual, I’m married, I have an advanced degree, I’m able-bodied, I have no disabilities. Often your blind spots are your areas of privilege. You have to stand outside yourself and your own experience to understand others. Unless you ask someone else, you don’t know what the blind spots are.

Do you think we are at a turning point in American society?
Yes, and it’s a significant one. We are at a place where we have to change or we are going to harm ourselves more. We’re still trying to get to a place where our founding documents apply to everyone. I think people see hope that we’ll get there.

Do you think conversations about race and racism are becoming easier for people?
I think they’re becoming easier—and that people are getting to a space to understand that having a conversation about race is not a bad thing. That we can celebrate and talk about our differences, and it’s not negative. And I think because there are so many conversations about race happening on so many levels, so many platforms that people who’ve never had a conversation before or people who could ignore it before—they can’t. We’re getting to a place where we can talk about it, and if we can talk about it, we can deal with it.