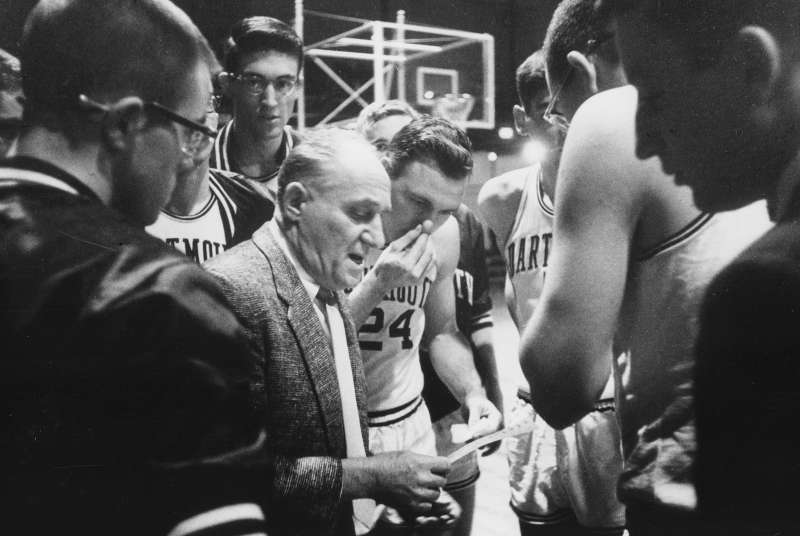 One night more than 50 years ago, the men’s basketball team went back to the future with a bold experiment in scoring.
Charles Monagan ’72 | Nov - Dec 2018

It wasn’t the score that made national headlines when Dartmouth played Boston University on January 28, 1961, in Hanover. What was historic was how the game was scored. In a first for the NCAA—and 25 years before it officially introduced the three-point line—every field goal counted for three points.

Dartmouth coach Alvin “Doggie” Julian came up with the idea. The former head coach of the Boston Celtics, then in his 11th year at Dartmouth, was tired of free throws. Only three years earlier the one-and-one rule had been put in place, allowing an extra foul shot once a six-foul limit had been reached. Julian hated it.

“This game wasn’t meant to be decided by free throws,” he told a reporter, adding that too many teams were losing despite scoring more field goals than their opponents. “We increased the value of the foul with the one-and-one rule,” he told The Boston Globe. “Why not enhance the value of the field goal now?”

Julian’s frustration was only exacerbated by his team’s woeful performance that season. After leading his players to strong showings in the late 1950s, Julian found himself in charge of a disaster that was headed for a 5-19 record. He was desperate for change and, with nothing to lose, hatched a plan to change the game. Three-point field goals, he argued, “could cut down on sloppy bombing and make teams work for good shots.”

At a meeting of Ivy League coaches two weeks before the BU game, Julian, chairman of the coaches’ rules committee, made his case. His peers didn’t like the idea, but they grudgingly gave permission for Julian to play an experimental game. BU coach John Burke, leading a 5-9 team, shrugged. “We’ll be glad to try the new rule and see what happens,” he told The Boston Globe.

“Can you imagine the fans’ reaction if a team is losing by three points, has the ball, and has a chance to tie it with one shot? The fans will go wild,” said Julian. The coach never claimed the three-pointer would solve basketball’s problems. “But I think something should be done. Maybe this will focus attention on the need for change,” he told The Dartmouth. “All I want is that the need for some kind of change be realized.”

Even the guys who played the game don’t recall making history.

Once the game was scheduled, The Dartmouth produced a barrage of critical stories. “It will cause more fouling than ever,” Holy Cross coach Roy Leenig told the paper. “Doggie’s nuts on this one,” added Princeton coach Frank “Cappy” Cappon. Teammates Steve Swirsky ’63, Sam Barton ’63, and Dan Berry ’61 all came out against the experiment. The three-pointer gives you “more reason to foul at the end of the game,” Barton told the paper. “Better to clobber your man and risk two from the charity line than three from outside.”

The Dartmouth even produced a chart demonstrating that up to that point in the season, Julian’s rule would have made no difference in his then 2-10 record.

A later-than-usual 9 p.m. start drew a capacity crowd of about 2,000, mostly students. Dartmouth took early control, led 57-44 at the half, and won, 119-89. Without the new rule, the final tally would have been 85-67. “The only noticeable difference: the score was higher,” sniffed Sports Illustrated. “Judging from the score, uninformed Dartmouth alumni might believe that the Indians had imported Wilt Chamberlain, Oscar Robertson, or maybe Bob Cousy for their high-scoring triumph,” The New York Times reported.

Julian’s failed experiment was soon forgotten. There’s no record of him attempting it again. When contacted by DAM, no one at BU’s or Dartmouth’s athletics departments knew of the game, including Big Green coach David McLaughlin. “You always have ideas on what rules could be changed,” he says. “It’s amazing to me that one guy like Doggie could have implemented his idea in an actual NCAA game. Different times, I guess.”

Even the guys who played the game don’t recall making history. Not guard Steve Spahn ’63, who scored 13 points, or forward Charles Church ’62 or guard Elliot Gerson ’63. “I have little recollection of the three-point field goal experiment against BU,” recalls guard Howard Keys ’61. (At DAM’s request, the athletics department went digging and discovered an old score sheet, which you can view below.) Dartmouth center George Ramming ’61 and guard Robert West ’63 dominated the game, scoring a combined 70 points. 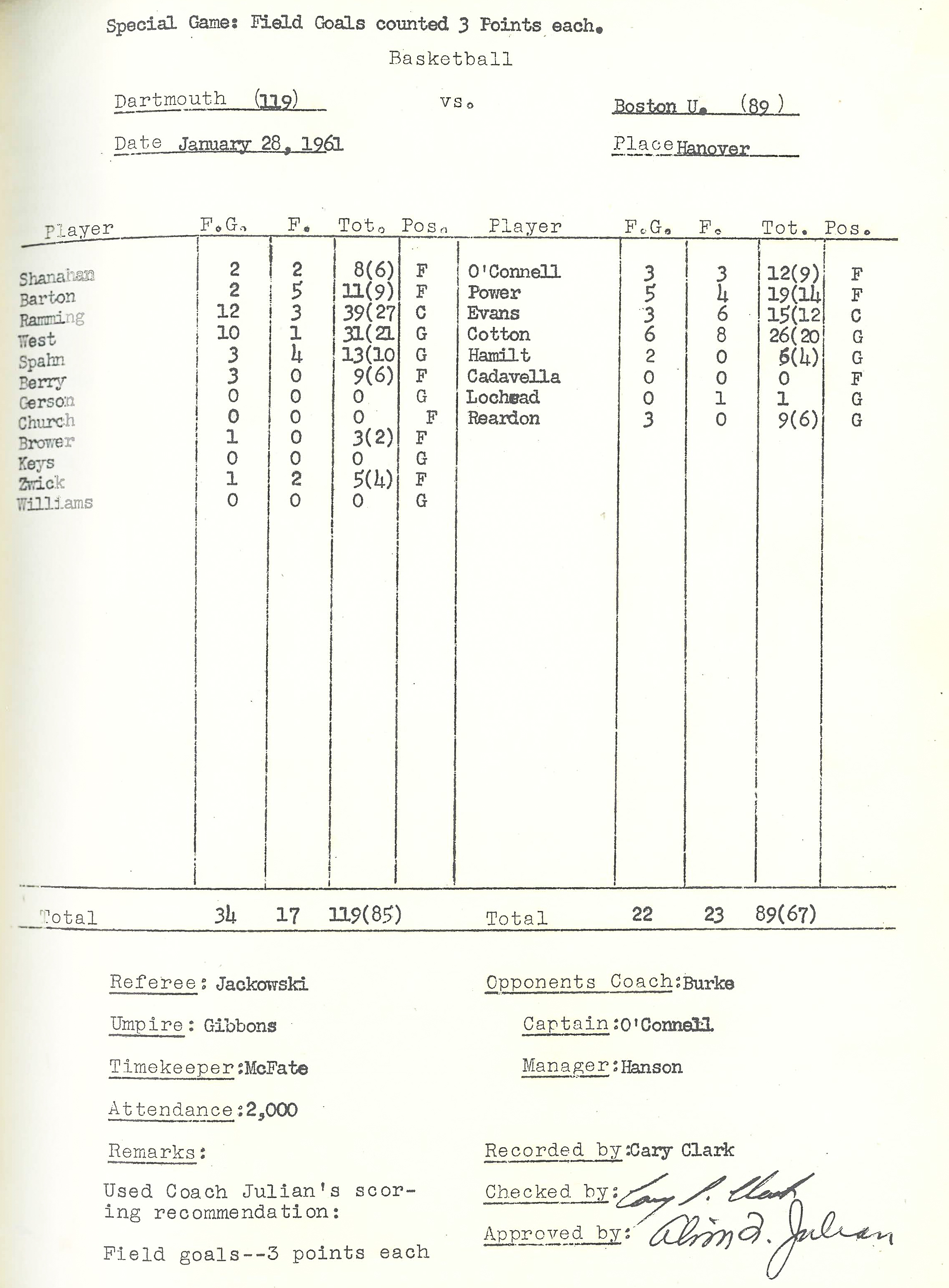 In December 1966, Julian collapsed while coaching his team during a tournament in Rochester, New York. He died seven months later. The next year he was inducted into the Basketball Hall of Fame.

The idea of a three-pointer didn’t die with him. The American Basketball Association implemented a three-point line in 1967, the NBA adopted the rule in 1979, and the NCAA joined the fray in 1986.

Charles Monagan is a writer and editor at work on his second novel. He lives in Connecticut.