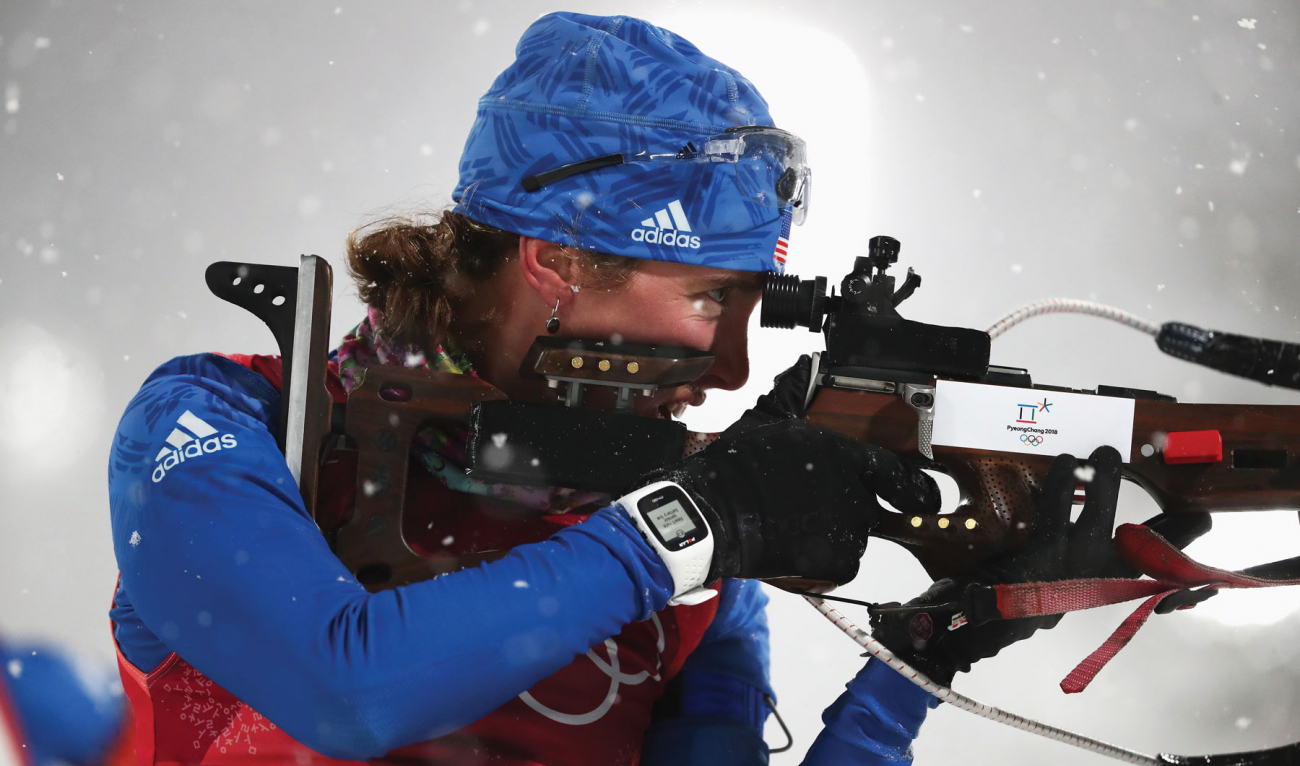 There is just one winter sport in which the United States has never won an Olympic medal of any kind: biathlon. As the Beijing Games approach, the best hope of changing that could rest with Susan Dunklee. At 35, Dunklee is the only U.S. female biathlete to win an individual medal at the world championships, an achievement she notched in 2017 and repeated last year.

Biathlon’s seemingly random pairing of skills—skiing and shooting—traces its roots to 18th-century ski races organized by Norwegian border guards. The sport combines the pulse-pounding exertion of cross-country skiing with the calm precision of marksmanship.

When Dunklee finishes a sprint and raises her .22-caliber Anschutz rifle to her shoulder, you can see her abdomen heaving to suck in oxygen, even as her upper body achieves the near-perfect stillness required to shoot. That contrast encapsulates what she loves about biathlon. “You have the go-go-go mentality of endurance racing, where you’re pushing the body to its utmost limits and your heart’s going at three beats per second—and then you have to shift to a very calm, zen-like mentality,” she says. “Switching like that is really difficult, especially in a high-pressure situation.”

A standout cross-country skier and runner at Dartmouth, Dunklee as a senior was invited by the U.S. Biathlon Association (USBA) to join a program designed to turn top NCAA skiers into biathletes. Though hunting was common in northern Vermont where she grew up, she had never handled guns. “Shooting was never on my radar,” she says. “But I drove over to Lake Placid [New York] one weekend to try it out.” She ended up making the sport her life.

“Susan is extraordinarily hardworking,” says Max Cobb ’87, president and CEO of the USBA. “She can push herself so hard on a course that she’s literally almost about to black out.” Cobb recalls Dunklee’s effort five years ago to improve her shooting speed. “After 2016 Susan decided that she would become a fast shooter, and in one summer of training she did it. In fact, part of her silver medal performance in 2017 was being incredibly fast and clean on the shooting range. I consider it amazing.”

While high-profile Olympic sports showcase a coterie of wealthy, professional megastars, most Olympic athletes must scramble for an existence. Careers such as Dunklee’s evoke the amateur era, when your sport was your passion but not your means of making a living. She works and trains at the Craftsbury Outdoor Center in Vermont, a nonprofit center for sports and education, where through the years she has done what she calls “an eclectic collection of jobs”—from coaching kids and growing food in the garden to collecting pondwater samples in an ongoing water-quality management program. For several years she kept bees. A funny educational video put out by the International Biathlon Union, Biathlon 4 Newbies, shows Dunklee serving her own honey to fellow biathletes for breakfast. She sees continuities between the beekeeper’s and the biathlete’s challenges. “When you’re surrounded by thousands of bees, you have to stay very calm and deliberate in your movements,” she says. “And the stakes are pretty high.”

Brisk and direct in conversation, Dunklee laughs about the obscurity of biathlon in the United States. “People say to me, ‘Oh, cool, you’re a biathlete—that’s running and swimming, right?’ ” In Europe, she points out, top biathletes are household names. The U.S. team has been hoping to bring the sport into the limelight, and with Dunklee’s silver medal in 2017 at the world championships and teammate Lowell Bailey winning gold on the men’s side there, the 2018 PyeongChang Olympics seemed set up for the United States to emerge. But two days after arriving in South Korea—her second Olympics—Dunklee came down with the flu. She finished 19th.

“You spend four years preparing for the Olympics, and then to have a good race you have to have a perfect day.”

Though the two top female biathletes at PyeongChang have retired, Dunklee is guarded about her chances in Beijing. “You spend four years preparing for the Olympics, and then to have a good race you have to have a perfect day,” she says. “And perfect days are not something that you have every day.” In any case, fixating on it doesn’t help. “You’re standing head-to-head with a competitor,” she adds, “and you think, ‘Man, if I can just hit all these targets, I might win an Olympic medal.’ The second those thoughts go through your head you have to refocus on what you’re doing. Otherwise, you don’t have a snowball’s chance in hell of hitting your targets.”

Dunklee, recently named director of the running program at Craftsbury, plans to retire from biathlon in March and looks forward to being able to stay in one place. “This is absolutely, 100 percent, my last Olympics,” she says. “It’s really, really hard on your body to compete at this level. I’ve had a long career, a good career, and now I’d like to explore other aspects of my life.”

Biathlon is intense—mentally, physically, and emotionally. For any American who finally brings home an Olympic biathlon medal, that intensity will be all the greater. Cobb calls it “just a matter of time” and considers Dunklee one of a handful of Americans who could provide the breakthrough moment. Dunklee herself won’t hazard a prediction. “I’m not a favorite by any stretch,” she says. “Americans are all underdogs. But it’s kind of fun to be an underdog.”

Rand Richards Cooper wrote about Lauren Fontein ’02 in the November/December 2021 issue of DAM.