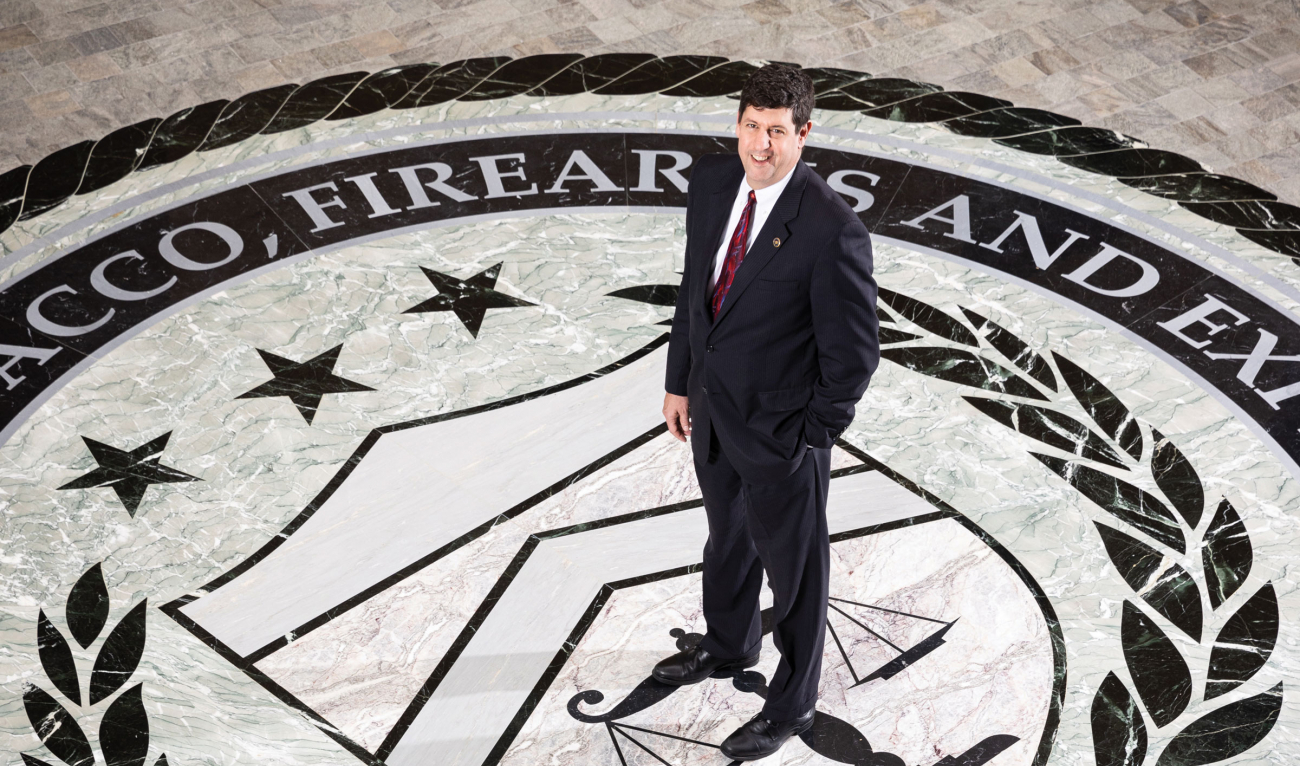 “Our Job Is Enforcement”

As a premed student, Steve Dettelbach ’88 focused on the public health crisis of the moment—the deadly AIDS epidemic. Following a cafeteria discussion, he and three classmates founded Responsible AIDS Information at Dartmouth, which triggered national controversy with its frank, theatrical shows that championed condom usage and promoted safe sex. Dettelbach ultimately chose law school over med school, and now finds himself in the middle of another hot-button political debate—gun control—as director of the U.S. Bureau of Alcohol, Tobacco, Firearms and Explosives (ATF). In July the U.S. Senate confirmed Dettelbach for the post, which had been vacant for seven years.

Did you ever imagine yourself heading a federal law enforcement agency?
I was a premed guy. Both my folks were lawyers, my aunt was a lawyer, but I thought I was going to break free, and I took almost all of my premed requirements. But I was destined to be an attorney. I did the Dartmouth government program in D.C. I was an intern on the Senate Judiciary Committee—the same committee that confirmed me.

Did your decades as a federal prosecutor in Cleveland ever involve ATF?
I’ve probably done every kind of case you can do as a federal prosecutor. I’ve always had a steady diet of cases that ATF worked on—cases that involved significant violence. We did a case involving an arson of the largest mosque in Ohio, the Greater Islamic Center in Toledo. It was a guy from Indiana who had gotten tanked up on cable TV and beer. He went to the mosque in the afternoon. Thankfully, he missed a large community meeting there. He went in there, poured gasoline, and torched the place. That community, they were out of that mosque for months. I went to their service, and they were praying at the Holiday Inn Express. That really made an impression on me. It’s the 21st century in the United States of America, and this community is having to pray in the conference room of a motel because of what this guy did.

Gun rights groups have blocked the appointment of an ATF director in the name of over-regulation. Why?
I’m not sure. ATF’s mission is a law enforcement mission. To me, it’s inexplicable that we would never put someone in the position. It just makes no sense. That has gone on in both parties’ administrations. It’s not good government.

How do you separate ATF from gun politics?
Our job is enforcement. Our job is to take whatever laws come out of that debate and implement them. I’m not saying that the debate on these issues is not important, but I’m not a member of Congress, I’m not the president. They will have that debate. Then it’s our job at ATF to implement it.

As your confirmation was coming to a vote, gun violence was very much in the headlines.
The Uvalde massacre [in Texas] happened the night before my confirmation hearing in May. And Highland Park [Illinois] happened while my nomination was being considered. It’s hard to find a time when there wasn’t a significant mass shooting in the past months and years. People might say, “What a coincidence.” It’s not a coincidence because, sadly, there is event after event—more than 400 mass shootings in 2022 alone. Some of them get massive amounts of attention. Some don’t get enough.

The vote to confirm you was 48-46, with a certain Republican crossing party lines.
Sen. Rob Portman ’78 [R-Ohio] voted for my confirmation. He and I have worked on a lot of things together. He was in the Senate for most of my time as U.S. attorney. I was very honored to get the votes of Sen. Portman and Sen. Susan Collins [R-Maine].

What do Americans not know about the ATF?
We have the biggest problem, but the smallest agency. You have to force multiply—work with state and local law enforcement. We have a crime-gun intelligence center with the New York Police Department. Yesterday I was in New York to see what they’re doing. Every morning they meet in a group of 60 to 70 people. They have a list of people arrested for shootings in New York the night before. Between 5 a.m. and that meeting, a massive amount of data analysis has been done on all those individuals. By 10 a.m., they have each person’s criminal history, details about other incidents they may have been involved in, social media searches, and an assessment: How much of a threat is this individual? Is this someone we’ve been looking for?

It’s hard to find a time when there wasn’t a significant mass shooting in the past months and years.

How have crime-fighting tools evolved?
Technology is at the point where the strike and ejection of that cartridge casing can now be microscopically matched. The Highland Park shooting is a great example: An emergency trace of the firearm used led to identifying and catching the Fourth of July shooter before he could act again. The trace of the firearm tells you where it was born. The casing analysis will tell you the firearm’s criminal history. You might be able to connect that gun with three other incidents in the last year. Recently I saw this play out in real time. There was a hit on a gun used in a crime in New York. It had been used earlier in a stop sign shooting. Now you can go back to the stop sign shooting—are there cameras there? License plate readers? Other evidence?

How does the ATF’s new “ghost gun” rule affect gun owners?
Ghost guns are nothing more than firearms that don’t have a serial number. There’s no ability to trace it. If people want to go out and build their own firearms, they’re still allowed. Getting serial numbers on these firearms will ensure that if those guns turn into crime guns, law enforcement can trace those guns and catch those trigger pullers.

Any final thoughts about your new position?
As you can tell, I’m excited. Part of what I learned at Dartmouth is: You step up. I hope that I can do the Big Green proud.