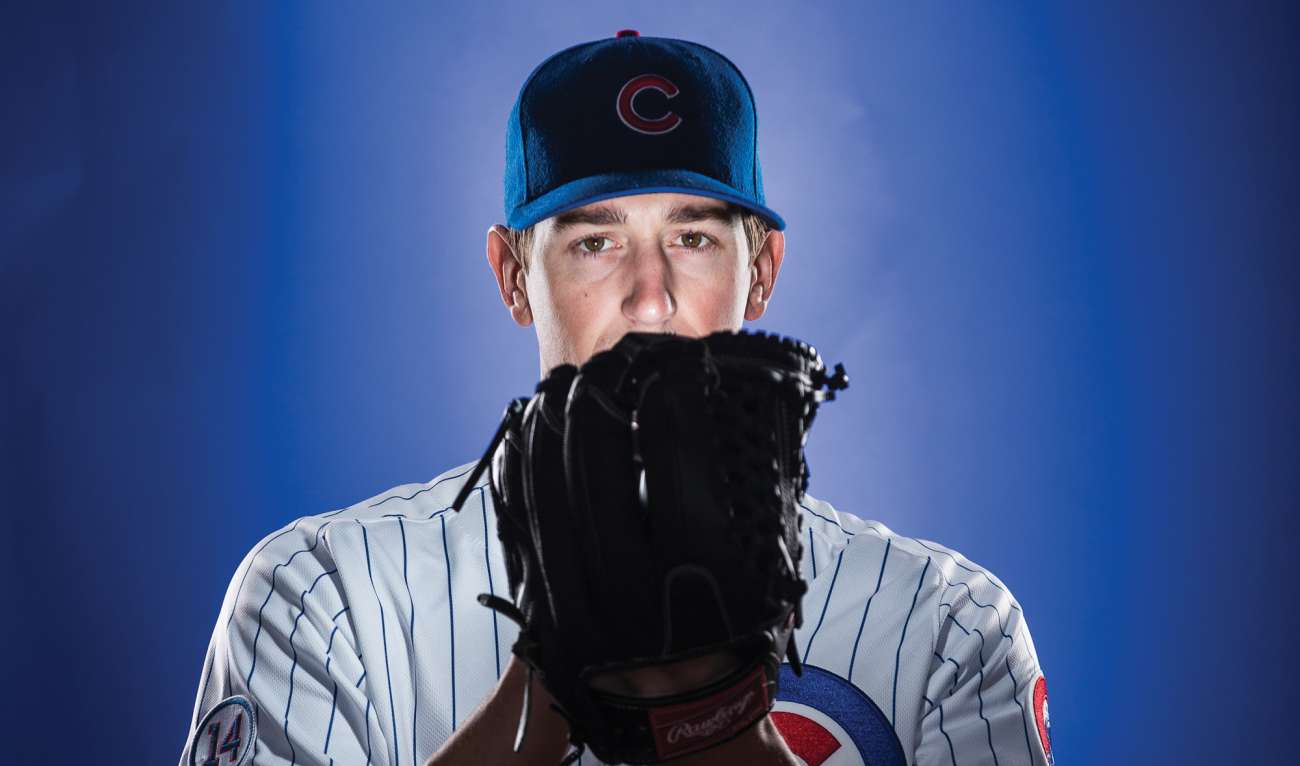 “They threw that on the menu every once in a while, but I never tried them,” Hendricks says. “I was more of a yellow eggs kind of guy.”

Hendricks, 29, has made a career out of trusting himself.

Rather than sign with the Los Angeles Angels out of high school as a 39th-round draft pick in 2008, the Southern California native, an excellent student, headed for Hanover to play baseball for longtime Big Green coach Bob Whalen. This was music to the ears of Hendricks’ parents. They didn’t graduate from college but were determined to see their children achieve that milestone.

Hendricks still envisioned a future on the mound.

“My focus, 100 percent, was always on baseball, even when I committed to go to Dartmouth,” he says. “Education was always on the forefront of my mind, but baseball was my love. I knew I wanted to give it everything I had.”

Hendricks pitched his way into the eighth round of the 2011 draft, when the Texas Rangers selected him following his junior season. But he threw with modest velocity and was easy to overlook. After a year he was traded to the Cubs.

“There’s always something you need to get better at.”

With Chicago he hit the ground running. The right-hander earned the organization’s minor league pitcher of the year honors in 2013. He returned to Hanover that fall to complete his degree in economics modified with math. On July 10, 2014, he made his major league debut in Cincinnati.

In 2015, as the Cubs began their ascent in the National League, Hendricks played in the shadows of veteran stars Jon Lester and Jake Arrieta. Encouragement from first-year manager Joe Maddon helped him establish his identity.

“Every day I’d go out during batting practice to shag balls [in the outfield], and Joe would always stop me and call me over before I got out there,” Hendricks says.
“ ‘Be you.’ That’s what I remember him saying, ‘Just be you.’ He reiterated it in a lot of different ways, but what he was telling me was that he had the utmost confidence in me to just do my thing. He always believed in the [ability] I had, and that was huge for me.”

Hendricks became locked in during the 2016 season as few Cubs pitchers ever had. He had one of the slowest fastballs among major league starters, but he more than made up for it by outwitting hitters. The Cubs pitchers were famously studious between starts, poring over video and scouting metrics, but no one took this to the extent Hendricks did. He led all of baseball with an earned-run average of 2.13 and was on the mound for the two most iconic games in modern Cubs history: the night they closed out the Los Angeles Dodgers to advance to the World Series and the night they beat the Cleveland Indians for their first title in 108 years.

He has only cemented his status with the Cubs since then.

“I’m telling you, he’s like a machine,” says teammate Mike Montgomery, the pitcher who recorded the final out against Cleveland. “It’s incredible to see. This guy’s got nerves of steel.”

(Most of the time, that is. Of his wedding in November 2017, Hendricks says: “I was probably way more outwardly nervous and emotional than I would be in a baseball setting. I had to employ some of the same mental things: Breathe. Simplify. Focus on what you’re doing here.”)

What Hendricks has, above all else, is the trust in himself to navigate dicey moments in big games. To commit to a certain pitch when he suspects the batter anticipates a different one. To take that one last deep breath that enables him to tune out a hostile crowd. To lean into the pressure because someone has to—so why not him?

“There’s always something you need to get better at. Until the day comes that the game’s over for me, I’m always going to try to keep elevating my game,” he says. “That’s my advice for anyone: You’re never done.”

He recalls being overwhelmed occasionally as a Big Green freshman, but he learned to manage his nerves—often by stepping off the mound and whispering self-affirmations into his glove. By the third and deciding game of the 2009 Ivy League Championship against Cornell, he’d become a stoic starter. He threw 7 1/3
innings in a 10-0 victory.

Hendricks stays in touch with senior lecturer Maura Doyle, who taught him his favorite class, a microeconomics course. “It made the most sense to me, and I did well,” he explains. In “the Dartmouth bubble,” he says, it was either class or baseball. It’s easy to understand the origins of his current nickname, “The Professor,” but in College he was known as “Hendu” or “Hendo.”

Those were special times.

Steve Greenberg is a sports columnist for the Chicago Sun-Times.