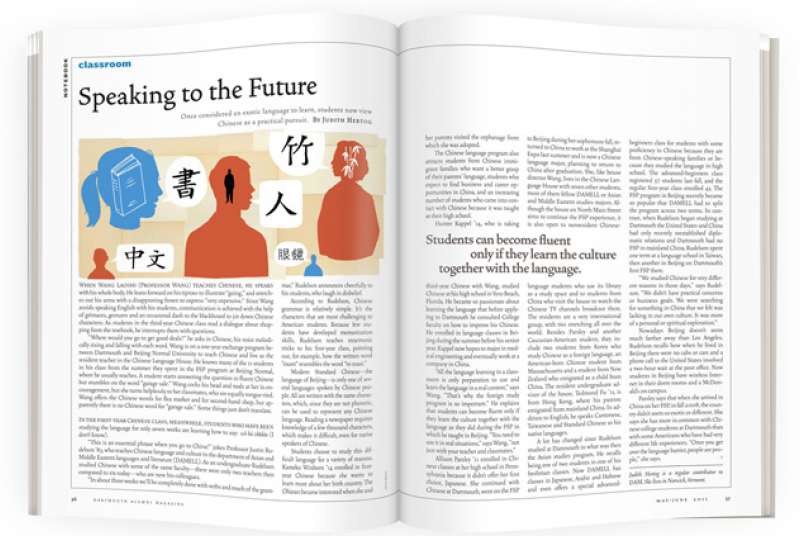 Speaking to the Future

Once considered an exotic language to learn, students now view Chinese as a practical pursuit.
Judith Hertog | May - June 2011

When Wang Laoshi (Professor Wang) teaches Chinese, he speaks with his whole body. He leans forward on his tiptoes to illustrate “going,” and stretches out his arms with a disapproving frown to express “very expensive.” Since Wang avoids speaking English with his students, communication is achieved with the help of grimaces, gestures and an occasional dash to the blackboard to jot down Chinese characters. As students in the third-year Chinese class read a dialogue about shopping from the textbook, he interrupts them with questions.

“Where would you go to get good deals?” he asks in Chinese, his voice melodically rising and falling with each word. Wang is on a one-year exchange program between Dartmouth and Beijing Normal University to teach Chinese and live as the resident teacher in the Chinese Language House. He knows many of the 11 students in his class from the summer they spent in the FSP program at Beijing Normal, where he usually teaches. A student starts answering the question in fluent Chinese but stumbles on the word “garage sale.” Wang cocks his head and nods at her in encouragement, but she turns helplessly to her classmates, who are equally tongue-tied. Wang offers the Chinese words for flea market and for second-hand shop, but apparently there is no Chinese word for “garage sale.” Some things just don’t translate.

In the first-year Chinese class, meanwhile, students who have been studying the language for only seven weeks are learning how to say the often-helpful phrase meaning "I don’t know."

“This is an essential phrase when you go to China!” jokes Professor Justin Rudelson ’83, who teaches Chinese language and culture in the department of Asian and Middle Eastern languages and literature (DAMELL). As an undergraduate Rudelson studied Chinese with some of the same faculty—there were only two teachers then compared to six today—who are now his colleagues.

“In about three weeks we’ll be completely done with verbs and much of the grammar,” Rudelson announces cheerfully to his students, who laugh in disbelief.

According to Rudelson, Chinese grammar is relatively simple. It’s the characters that are most challenging to American students. Because few students have developed memorization skills, Rudelson teaches mnemonic tricks to his first-year class, pointing out, for example, how the written word “exam” resembles the word “to roast.”

Modern Standard Chinese—the language of Beijing—is only one of several languages spoken by Chinese people. All are written with the same characters, which, since they are not phonetic, can be used to represent any Chinese language. Reading a newspaper requires knowledge of a few thousand characters, which makes it difficult, even for native speakers of Chinese.

Students choose to study this difficult language for a variety of reasons. Kameko Winborn ’14 enrolled in first-year Chinese because she wants to learn more about her birth country. The Ohioan became interested when she and her parents visited the orphanage from which she was adopted.

The Chinese language program also attracts students from Chinese immigrant families who want a better grasp of their parents’ language, students who expect to find business and career opportunities in China, and an increasing number of students who came into contact with Chinese because it was taught at their high school.

Hunter Kappel ’14, who is taking third-year Chinese with Wang, studied Chinese at his high school in Vero Beach, Florida. He became so passionate about learning the language that before applying to Dartmouth he consulted College faculty on how to improve his Chinese. He enrolled in language classes in Beijing during the summer before his senior year. Kappel now hopes to major in medical engineering and eventually work at a company in China.

“All the language learning in a classroom is only preparation to use and learn the language in a real context,” says Wang. “That’s why the foreign study program is so important.” He explains that students can become fluent only if they learn the culture together with the language as they did during the FSP in which he taught in Beijing. “You need to use it in real situations,” says Wang, “not just with your teacher and classmates.”

Allison Parsley ’11 enrolled in Chinese classes at her high school in Pennsylvania because it didn’t offer her first choice, Japanese. She continued with Chinese at Dartmouth, went on the FSP to Beijing during her sophomore fall, returned to China to work at the Shanghai Expo last summer and is now a Chinese language major, planning to return to China after graduation. She, like house director Wang, lives in the Chinese Language House with seven other students, most of them fellow DAMELL or Asian and Middle Eastern studies majors. Although the house on North Main Street aims to continue the FSP experience, it is also open to nonresident Chinese-language students who use its library as a study space and to students from China who visit the house to watch the Chinese TV channels broadcast there. The residents are a very international group, with ties stretching all over the world. Besides Parsley and another Caucasian-American student, they include two students from Korea who study Chinese as a foreign language, an American-born Chinese student from Massachusetts and a student from New Zealand who emigrated as a child from China. The resident undergraduate advisor of the house, Tedmond Fu ’11, is from Hong Kong, where his parents emigrated from mainland China. In addition to English, he speaks Cantonese, Taiwanese and Standard Chinese as his native languages.

A lot has changed since Rudelson studied at Dartmouth in what was then the Asian studies program. He recalls being one of two students in one of his freshman classes. Now DAMELL has classes in Japanese, Arabic and Hebrew and even offers a special advanced-beginners class for students with some proficiency in Chinese because they are from Chinese-speaking families or because they studied the language in high school. The advanced-beginners class registered 57 students last fall, and the regular first-year class enrolled 43. The FSP program in Beijing recently became so popular that DAMELL had to split the program across two terms. In contrast, when Rudelson began studying at Dartmouth the United States and China had only recently reestablished diplomatic relations and Dartmouth had no FSP in mainland China. Rudelson spent one term at a language school in Taiwan, then another in Beijing on Dartmouth’s first FSP there.

“We studied Chinese for very different reasons in those days,” says Rudelson. “We didn’t have practical concerns or business goals. We were searching for something in China that we felt was lacking in our own culture. It was more of a personal or spiritual exploration.”

Nowadays Beijing doesn’t seem much farther away than Los Angeles. Rudelson recalls how when he lived in Beijing there were no cabs or cars and a phone call to the United States involved a two-hour wait at the post office. Now students in Beijing have wireless Internet in their dorm rooms and a McDonald's on campus.

Parsley says that when she arrived in China on her FSP, in fall 2008, the country didn’t seem so exotic or different. She says she has more in common with Chinese college students at Dartmouth than with some Americans who have had very different life experiences. “Once you get over the language barrier, people are people,” she says.

For those not fluent in Chinese but interested in the culture and language, Professor Rudelson recommends the following:

Dreaming in Chinese: Mandarin Lessons in Life, Love, and Language by Deborah Fallows (Walker and Co., 2010) is a memoir of the author’s mastery of Mandarin.

The Lost and Forgotten Languages of Shanghai: A Novel by Ruiyan Xu (St. Martin’s Press, 2010) looks at the role language plays in one’s identity.

Travelers to China may also want to check out Lonely Planet’s Mandarin Phrasebook, which Rudelson cowrote.