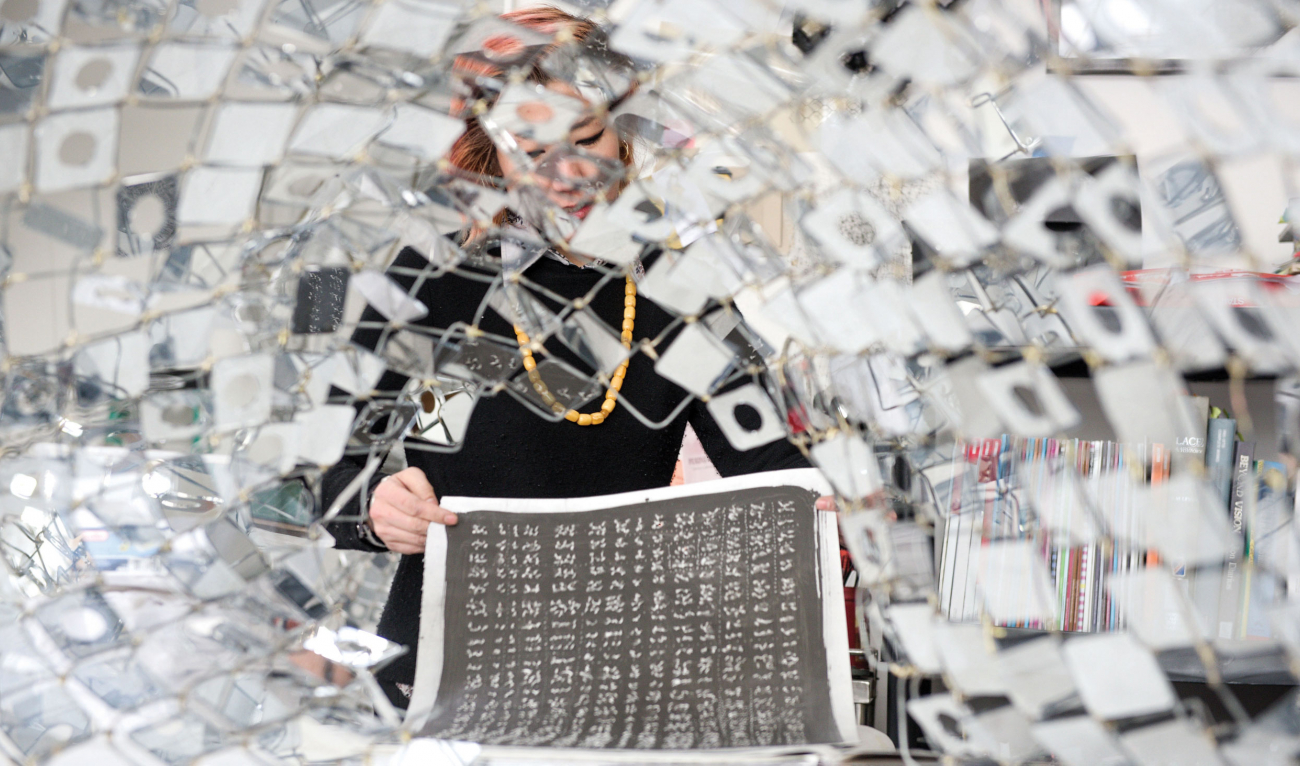 The artist works on her installation “Photo-Kinetic Grid” for a 2018 show. “In my work,” she says, “light is not just a means by which the form is seen, but also part of what constitutes the work of art.” (Photo by James Patterson/Valley News)
Features

Dartmouth studio art professor Soo Sunny Park sometimes worries about being misunderstood when she sends an email. “I still feel it’s hard to communicate just what I want to say,” says Park, who couldn’t speak English when she came to the United States from South Korea at the age of 10. Living in Marietta, Georgia, and Orlando, Florida, she struggled to assimilate until she found a connection to others in art class. “Not all communication is language,” she says.

Park won a scholarship to study at the Columbus College of Art & Design in Ohio, then earned her graduate degree from the Cranbrook Academy of Art in Michigan. Now 46, Park makes 3-D sculptural installations out of fencing, plastic, glass, and drywall. By reconfiguring these boundary materials—a metaphor for the language barrier she felt as a child—Park explores the liminal spaces between them.

Park’s luminous sculptures hover in the air like magic, suspended from ceilings with wires. Her recent work, Expanded Present, on exhibit until July, is a vibrant 50-foot-tall installation composed of 40,000 red, green, and gray plexiglass tiles that surround the main entrance of the Smithsonian Arts and Industries Building, which recently reopened to the public after 15 years. Half of the tiles are dichroic, with a multicolored, mirror-like quality to them. In daylight, the artwork appears neon green but mellows into red at sunset.

“We were drawn to the way Soo Sunny’s work employs not just physical materials like glass, but also light itself as a medium of choice,” says Rachel Goslins, director of the Smithsonian building. Park was one of five artists selected to create work for the “Futures” exhibit to mark the Smithsonian’s 175th anniversary and the reopening.

An engineering team constructed a giant truss system to hold all of Park’s tiles—officials banned nails and other hazards to the historic building. Park constructed the sculpture at her campus studio, extensively welding and wire-brushing 50 small panel sections that could fit through the door and onto a 53-foot tractor-trailer.

Park’s fascination with light stems in part from a near-drowning experience she had as a child. “I remember looking up at the surface of the water as I sank down and feeling separate from everything else,” she says. Park recalls the light getting farther away as she descended into the water, a trauma that has stayed with her.

Park’s latest exhibition is “Veil of Vision,” at the Institute of Contemporary Art in San Jose, California, which runs until August. Inspired by her drive home to Cornish, New Hampshire, in the dead of winter on pitch-black Upper Valley nights, Park created a series of screens using black nylon netting and covered them in retro-reflective paint to mimic the headlights of her car reflecting bright light onto the road signs.

In the classroom, Park evaluates her students’ artwork on its ability to raise questions and create a conversation. At the start of her teaching career, Park graded on rubrics. “Check, check, check,” she says. “Students like that.” Now, though, she’s not “stuck on the glue” or color choices. She says it’s just as important that students learn how to critique what they’ve made.

“What I look for is if the student is able to reflect back on their work,” Park says. “Sometimes, people think that anything goes in art, but after a quarter of struggling through drawing and sculpture assignments, they realize that this is a domain of a practice with its own rules and possibilities and challenges.”

Betsy Vereckey is a freelance writer. She lives in the Upper Valley.