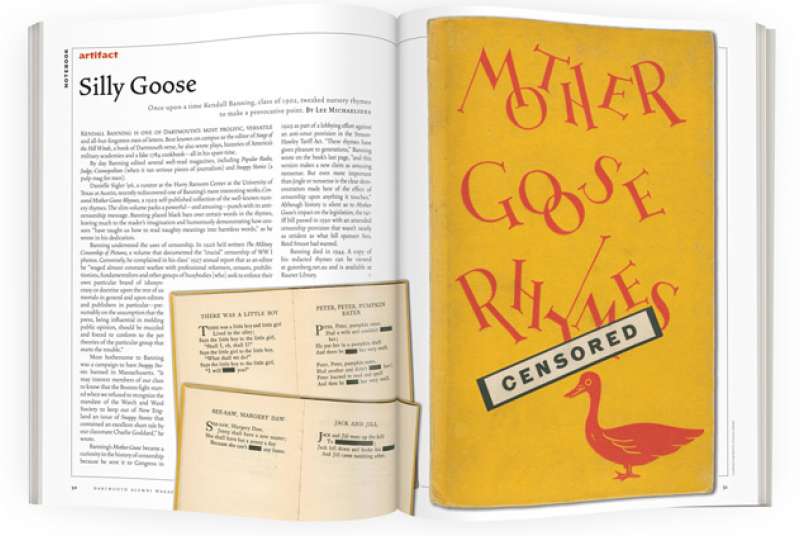 Once upon a time Kendall Banning, class of 1902, tweaked nursery rhymes to make a provocative point.
Lee Michaelides | Mar - Apr 2012

Kendall Banning is one of Dartmouth’s most prolific, versatile and all-but-forgotten men of letters. Best known on campus as the editor of Songs of the Hill Winds, a book of Dartmouth verse, he also wrote plays, histories of America’s military academies and a fake 1784 cookbook—all in his spare time.

Danielle Sigler ’96, a curator at the Harry Ransom Center at the University of Texas at Austin, recently rediscovered one of Banning’s more interesting works, Censored Mother Goose Rhymes, a 1929 self-published collection of the well-known nursery rhymes. The slim volume packs a powerful—and amusing—punch with its anti-censorship message. Banning placed black bars over certain words in the rhymes, leaving much to the reader’s imagination and humorously demonstrating how censors “have taught us how to read naughty meanings into harmless words,” as he wrote in his dedication.

Banning understood the uses of censorship. In 1926 he’d written The Military Censorship of Pictures, a volume that documented the “crucial” censorship of WW I photos. Conversely, he complained in his class’ 1927 annual report that as an editor he “waged almost constant warfare with professional reformers, censors, prohibitionists, fundamentalists and other groups of busybodies [who] seek to enforce their own particular brand of idiosyn-crasy or doctrine upon the rest of us mortals in general and upon editors and publishers in particular—presumably on the assumption that the press, being influential in molding public opinion, should be muzzled and forced to conform to the pet theories of the particular group that starts the trouble.”

Most bothersome to Banning was a campaign to have Snappy Stories banned in Massachusetts. “It may interest members of our class to know that the Boston fight started when we refused to recognize the mandate of the Watch and Ward Society to keep out of New England an issue of Snappy Stories that contained an excellent short tale by our classmate Charlie Goddard,” he wrote.

Banning’s Mother Goose became a curiosity in the history of censorship because he sent it to Congress in 1929 as part of a lobbying effort against an anti-smut provision in the Smoot-Hawley Tariff Act. “These rhymes have given pleasure to generations,” Banning wrote on the book’s last page, “and this version makes a new claim as amusing nonsense. But even more important than jingle or nonsense is the clear demonstration made here of the effect of censorship upon anything it touches.” Although history is silent as to Mother Goose’s impact on the legislation, the tariff bill passed in 1930 with an amended censorship provision that wasn’t nearly as strident as what bill sponsor Sen. Reed Smoot had wanted.

Banning died in 1944. A copy of his redacted rhymes can be viewed at gutenberg.net.au and is available at Rauner Library.