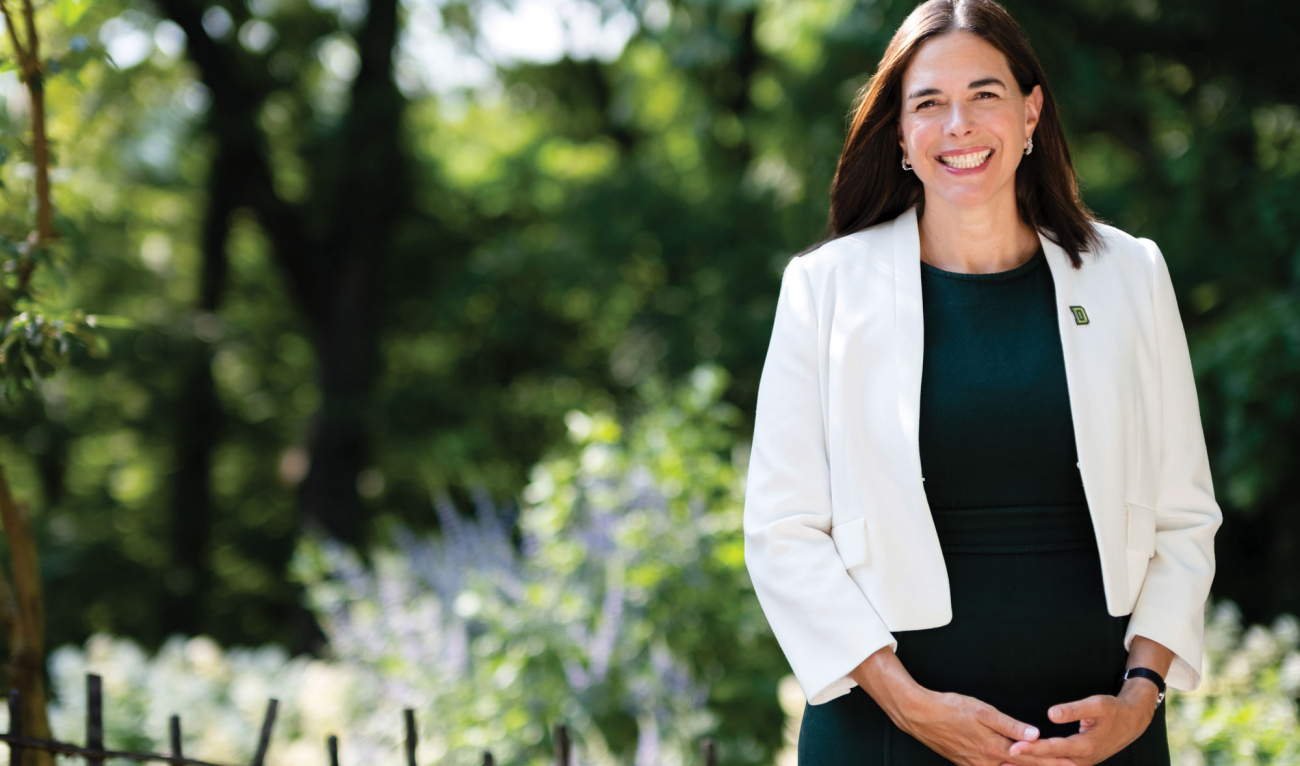 That’s how president-elect Sian Beilock describes her recent visit to campus. Here she talks about her management style, breaking barriers, and what she does when she wakes up each morning.
Sean Plottner | November-December 2022

Sian Leah Beilock, 46, will take over as Dartmouth’s 19th president in July. The cognitive scientist has served as president of Barnard since 2017 and previously worked at the University of Chicago for 12 years. She will be the College’s first female president—and she’ll significantly lower the average age of Ivy League presidents. “She’s a leader with the aspirational vision to build our research enterprise, further our tradition of excellence in undergraduate education, and expand our global impact,” says Dartmouth trustee chair Elizabeth Cahill Lempres ’83, Th’84. “Sian’s election in this, our 50th year of coeducation, was enthusiastic and unanimous.” Author of two books and parent of an 11-year-old daughter, Beilock spoke with DAM via Zoom from her Barnard office in early September.

Why do you want to be president of Dartmouth?
It’s really an amazing institution. I don’t think there are many places I have seen that combine this real focus on the liberal arts with having an R1 university and research with impact, and I’m drawn to that mission. I’m also drawn to a community that really cares about the institution, its history, and where it’s going. So I got
excited about it.

What did you think of the reception you received when you came to campus in July?
It was unbelievable. And it was really amazing to meet folks who’ve lived in Hanover for many years and been connected with the institution, but also, there were so many students there for their Sophomore Summer. To get to hear from them about why they chose Dartmouth and what they’re excited about—it’s great to be at a place that has academic excellence at its core. Everyone I talked to said something about having an impact and making the world a better place.

What kind of a manager are you?
I like to have really strong, smart people around who push back on my ideas. There’s so much psychological research showing that when you get diverse opinions around the table and people who feel free to challenge, you get the best outcomes. Thinking about how to put the best team forward and put the best team together is something I take very seriously, as I have at Barnard and before that at the University of Chicago as executive vice provost. Also, in my research, I spend time trying to understand how individuals and teams perform at their best.

I also dig deep when I want to understand something. I like data. I ask lots of people the same questions. And I know that asking lots of questions is my primary job this year, to get to know the institution and the community.

What did you learn about dealing with what could be called an institutional crisis after Barnard student Tessa Majors was murdered in 2019?
Dealing with crises is always difficult. I mean, it shakes a community. In the moment, the president’s role is to be the key communicator and to work to make sure the campus and the community has the information it needs to move forward. Even if that’s “We don’t know what’s going on.” The president also bears a real responsibility to help bring a community together in times of crisis [to demonstrate] that an institution has a big tent and allows for multiple views on issues. Oftentimes, there is an expectation that an institution should take a particular stand on an issue, on a political issue or otherwise, and I find that to be the antithesis of what higher education is about.

A really important part of how I lead is about bringing multiple views to bear on an issue and allowing for that dialogue, to make room for different views, even unpopular views, because I think people get better, their ideas get better, their knowledge gets better when they hear views that are different from their own.

What traits did you inherit from your parents?
o ask questions and ask for data and challenge assumptions. I grew up in a family where you had to give reasons and arguments for why you wanted something and what you were going to do. My parents were both lawyers, so maybe that had something to do with it. I brought that into my research career: to think logically and test whether an idea was correct. I do that as a leader and an academic. I want to know why people have particular ideas, what the data show, and how we get to the best outcome.

Do you have any heroes or notable mentors?
I’d say my mom, in many ways. She really pushed in terms of breaking barriers as a woman in the law. And when I wanted to play on the boys’ soccer team as a third-grader and was told I couldn’t, she showed me that well, yeah, actually, I could. She challenged it, and I got to play with my friends. I think she taught me that I could push back and really try and understand the situation and figure out what was best.

Did you ever think of applying to Dartmouth as a student?
I didn’t apply, although I was very interested in the school. I had my heart set on going East for college, but I stayed on the West Coast because my father had become ill, and my family and I decided it was better for me to be closer to home. I did go to a sports camp many years ago at Dartmouth, as I was a soccer player.

You have spoken and written about wellness. Do you have a self-care regimen, and who takes care of you?
First, I really believe in this idea that it’s okay to have multiple selves. I’m a mom, I’m a friend, I’m a professor, I’m an academic, I’m a president. And research shows that when you have a bad day in one, it’s okay, you can fall back on others. So when I’m having a hard time as president, I can go home and hug my daughter. Or when I’m told I’m the worst mom ever, I can write a research paper.

I run. I do yoga. I like good food. I like the outdoors. And I try and take the advice of many of my colleagues and psychologists and work to find moments to step back. We know that when you step back, that’s when a lot of creative ideas happen, you come up with insights. So even when I’m working a really hard day, I find those moments to step back, go for a walk, do something different.

“I want to be a president who helps propel a great institution to even greater heights.”

What’s the first thing you do when you wake up in the morning?
Usually I run.

You’ve written that you are a Grateful Dead fan. What do you like about them?
I think it goes back to these sort of multiple selves—that it’s okay to have different aspects of who you are. I was a really serious student. I was a cognitive science major. I worked hard. But it was fun to have an outlet that was less scripted, and I liked that aspect of the Grateful Dead.

Did you ever see them?
One summer, my friends and I drove around up and down the coast of California and spent some time going to concerts and hanging out at the shows.

What do you do with your daughter for fun?
We play tennis. She likes to bake and I like to eat, so we’re a really good combination. We walk our dog, Rosie. She’s a Cavapoo.

Do you have a new book in the works?
I’m busy these days, but stay tuned.

Have you ever thought of running for office or getting involved in politics?
I really do want to have an impact on society, and I think that happens through leading great higher education institutions. I think there are many ways to do that. And I guess never say never.

Have you ever played beer pong?
Yes.

How do you use your social media?
I think communicating, in this day and age, is not as simple as sending a letter or an email. So the more ways you can get a point or story across, and the more ways you can get input, the better. I see social media as a tool to communicate, but also a tool to get input. And that’s what’s special about an academic institution: So many different groups of people own its values. What students think matters, what faculty think matters, how the alums come in, the staff, that’s all really important. Social media is a way to bring in some of those views.

What do you think of all the excitement about you being Dartmouth’s first female president?
It’s a really interesting question, right? I mean, on one hand, you could say, “Well, I should just ignore that and talk about who I’m going to be as a president.” But I think my gender comes into it, and I’m okay with that. Again, I go back to this idea that different viewpoints and lived experiences lead to better outcomes. So I bring a strong experience as a president of a liberal arts college, as well as being at a major research university. I bring my research and my experience working with Fortune 500 companies and others on how to produce the best outcomes. And I bring my experience juggling multiple roles as a mother and an academic. I think that all contributes. I want to be a president who helps propel a great institution to even greater heights.

Barnard applications haven risen considerably during your tenure. Why?
My goal in leading Barnard was never to increase applications, but it is, I think, a product of telling the story of how special Barnard is. It’s a place that focuses on educating young women across the arts and sciences, and Barnard had been traditionally known as having eminence in the arts and humanities and dance. But there was a story to tell there about the great work it had done in the sciences. I think that’s led more people to look at Barnard’s potential to provide a great education.

Will you teach here?
I don’t plan to teach my own course right away. I do look forward to giving guest lectures in classes next year. I will also be moving my research lab to Dartmouth and look forward to interacting with students through my research.