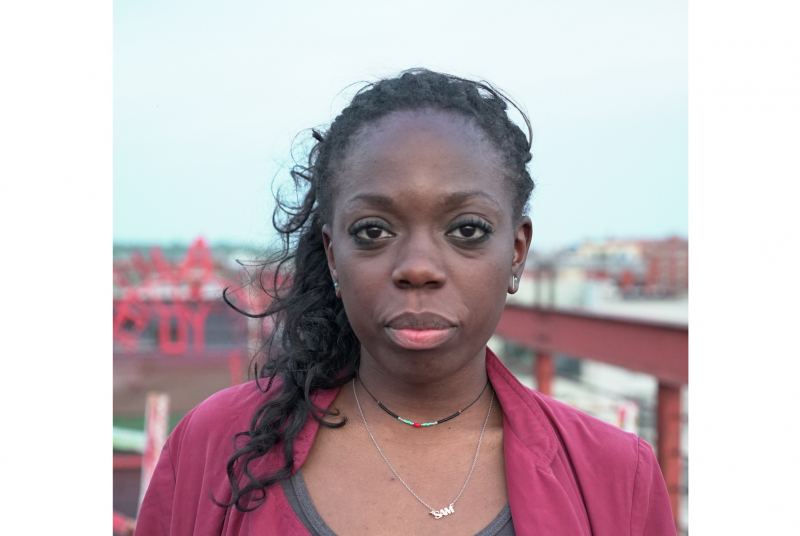 Samantha Knowles’ film career began her senior year at Dartmouth, after her thesis project, the documentary short Why Do You Have Black Dolls?, was accepted into the Reel Sisters of the Diaspora Film Festival and later played at four other festivals. She’s since directed a New York Times op-doc, The Blue Line, about a public show of support for police that divided her hometown, and Tangled Roots, about discrimination against natural hairstyles, which premiered at the 2020 Tribeca Film Festival. Knowles spoke with DAM about finding compelling stories, getting interview subjects to open up, and balancing her directing projects with a full-time job.

What got you interested in documentary filmmaking?
Around the time I was applying to college, I would watch the director’s cuts of DVDs over and over. I realized there’s a whole language in film that I had never thought about before. I applied to Dartmouth as a film major, just to explore the interest more. I never really saw myself making films at that point, but I knew I loved studying them. Then I did an internship at Insignia Films, a documentary company in New York City, during one of my off terms. I was really good at writing research papers, and documentaries felt like an extension of that.

How did you start making your own films?
I think as soon as I decided that I liked documentary film. It felt so accessible to me in a way that narrative film didn’t, and I started making things. I took a documentary filmmaking class with Jeff Ruoff, and I made a film about how people greet each other on campus. During another off term, I applied for a few grants on campus and made a film about my uncle, who was a corrections officer.

What was it like to have your senior thesis film get picked up on the festival circuit?
I think that project is my favorite thing that I did at Dartmouth. It sort of bridged my college life and my professional life. I was finishing the film, and I was really excited about it and just felt like it would resonate, so I started applying to a lot of Black film festivals, and they were really receptive. I got into my first film festival during graduation weekend, which was so amazing. I think it really helped give me confidence early on.

How do you find stories and subjects for your work?
All of my films really have to do with race and identity. They start from the thoughts I have rolling around in my head, and conversations that I’ve had with family and friends about race. The Blue Line [is set in] Warwick, New York, my hometown, and my parents were still living there at the time. This was in the fall of 2016, after Alton Sterling and Philando Castile were killed, and then a little while later the five Dallas police officers were killed, and the election was approaching. So all of these conversations were super salient. Then my dad tells me out of the blue, “Oh, they painted a blue line on Railroad Avenue in town in support of police.” And my town is one of those places that doesn’t address race. So immediately we were like, this is going to be a mess, and my dad said jokingly, “You should make a film about it.” That weekend I was there with a camera.

What are you working on now?
A documentary series for HBO that I’m co-directing with other people. It’s not announced yet, so I can’t talk about it a lot, but it’s about another issue that affects the Black community. Then I’m working on another project that is just being pitched, with The New York Times, that’s also not announced.

What advice do you give aspiring documentary filmmakers?
There’s so much about documentary filmmaking that’s really privileged, and there are a lot of privileged people in it, so it can be difficult to access. I think people can become too precious about, “Oh, I don’t have the perfect equipment, I don’t have the perfect this.” Just go out there and do an internship, try to make a film, tap into whatever resources you can get, and just try to do it.