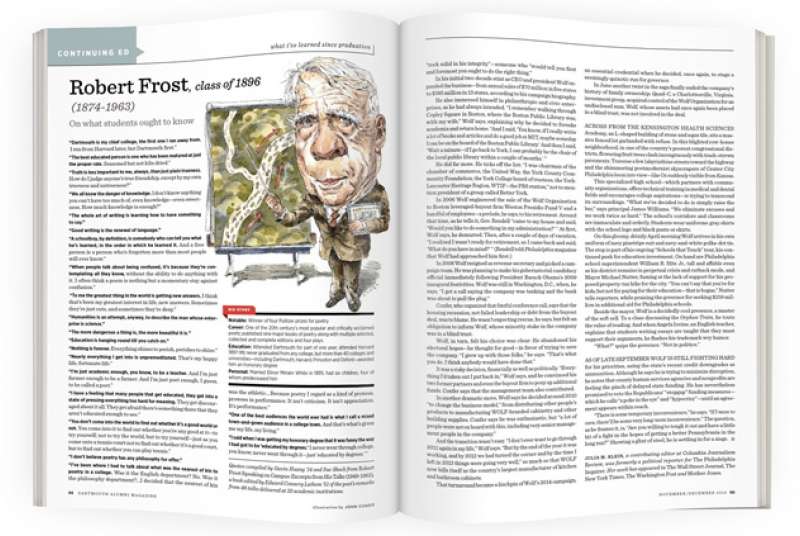 Career: One of the 20th century’s most popular and critically acclaimed poets; published nine major books of poetry along with multiple selected, collected and complete editions and four plays

Education: Attended Dartmouth for part of one year; attended Harvard 1897-99; never graduated from any college, but more than 40 colleges and universities—including Dartmouth, Harvard, Princeton and Oxford—awarded him an honorary degree

Personal: Married Elinor Miriam White in 1895; had six children, four of whom predeceased him

“Dartmouth is my chief college, the first one I ran away from. I ran from Harvard later, but Dartmouth first.”

“The best educated person is one who has been matured at just the proper rate. Seasoned but not kiln dried.”

“Truth is less important to me, always, than just plain trueness. How do I judge anyone’s true friendship, except by my own trueness and untrueness?”

“We all know the danger of knowledge. I don’t know anything you can’t have too much of, even knowledge—even sweetness. How much knowledge is enough?”

“The whole art of writing is learning how to have something to say.”

“Good writing is the renewal of language.”

“A schoolboy, by definition, is somebody who can tell you what he’s learned, in the order in which he learned it. And a free person is a person who’s forgotten more than most people will ever know.”

“When people talk about being confused, it’s because they’re contemplating all they know, without the ability to do anything with it. I often think a poem is nothing but a momentary stay against confusion.”

“Humanities is an attempt, anyway, to describe the man whose enterprise is science.”

“The more dangerous a thing is, the more beautiful it is.”

“Education is hanging round till you catch on.”

“Nothing is forever. Everything shines to perish, perishes to shine.”

“Nearly everything I get into is unpremeditated. That’s my happy life, fortunate life.”

“I have a feeling that many people that get educated, they get into a state of pressing everything too hard for meaning. They get discouraged about it all. They get afraid there’s something there that they aren’t educated enough to see.”

“I don’t believe poetry has any philosophy for offer.”

“One of the best audiences the world ever had is what I call a mixed town-and-gown audience in a college town. And that’s what’s given me my life, my living.”

Quotes compiled by Gavin Huang ’14 and Sue Shock from Robert Frost Speaking on Campus: Excerpts from His Talks (1949-1962), a book edited by Edward Connery Lathem ’51 of the poet’s remarks from 46 talks delivered at 32 academic institutions.