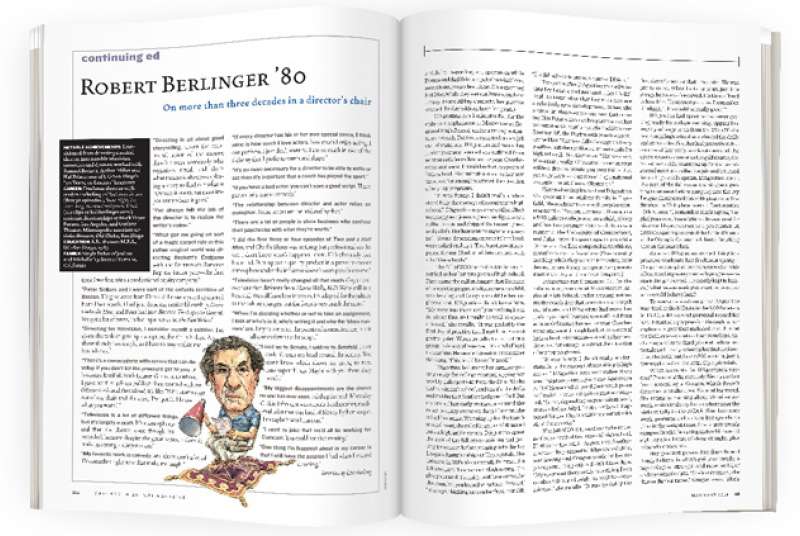 On more than three decades in a director’s chair.
Interview by Lisa Furlong | Sept - Oct 2011

“Directing is all about good storytelling. Given the communal spirit of the theater, there’s always somebody who organizes ritual, and that’s what theater is about—exploring a story to find out what it is, where it starts, but most importantly where it goes.”

“I’ve always felt the job of the director is to realize the writer’s vision.”

“What got me going on sort of a magic carpet ride in this rather magical world was directing Beckett’s Endgame with the Dartmouth Summer Rep my junior year—the first time I worked with a professional equity company.”

“Peter Sellars and I were sort of the enfants terribles of Boston. He graduated from Harvard the same year I graduated from Dartmouth. I had just done my senior fellowship, Desire Under the Elms, and Peter had just directed The Inspector General. We got a lot of press, including a notice in The New Yorker.”

“Directing for television, I consider myself a cobbler. I’m given the task of getting a script on the air in X days. A show already has a style, so I have to stay within the boundaries.”

“There’s a camaraderie with actors that can develop if you don’t let the pressure get to you. It becomes familial. With Lauren Graham, to whom I gave her first job on 3rd Rock then worked with on Gilmore Girls and Parenthood, it’s like ESP. I start to get out of my chair and she says, ‘I’ve got it. I know what you want.’ ”

“Television is a lot of different things, but it’s largely a craft. It’s more ephemeral than the theater, even though it’s recorded, because despite the great series, it doesn’t make as strong an impression.”

“My favorite work is comedy, and there aren’t a lot of TV comedies right now that make me laugh.”

“If every director has his or her own special sauce, I think mine is how much I love actors, how much I enjoy acting. I can perform, I just don’t want to. I am so much in awe of the alchemy that I prefer to watch and shape.”

“It’s no more necessary for a director to be able to write or act than it’s important that a coach has played the sport.”

“If you have a bad actor, you can’t save a good script. That’s particularly true in comedy.”

“The relationship between director and actor relies on metaphor. Some actors are intimidated by that.”

“There are a lot of people in show business who confuse their paychecks with what they’re worth.”

“I did the first three or four episodes of Two and a Half Men, and Charlie Sheen was nothing but professional on the set. I don’t know what’s happened there. He’s obviously lost his mind. Putting out a quality product in a pressure cooker atmosphere under the influence doesn’t seem possible to me.”

“Television hasn’t really changed all that much. Grey’s Anatomy isn’t that different from Marcus Welby, M.D. We’re still in a hospital. We still have love interests. It’s adapted for the culture as the culture changes, but the form is very much the same.”

“When I’m deciding whether or not to take an assignment, I look at who’s in it, who’s writing it and who the ‘show runners’ are. I try to see what the points of connection are, but it all comes down to the script.”

“I said no to Scrubs, I said no to Seinfeld. I just couldn’t wrap my head around the scripts. You don’t know which shows are going to turn into super things. Maybe with you there, they won’t.”

“My biggest disappointments are the shows no one has ever seen. I did a pilot with Macaulay Culkin I thought was superb. I did another, medieval pilot that was kind of Monty Python-esque. I thought it was hilarious.”

“I used to joke that we’d all be working for Comcast. You could see that coming.”

“One thing I’m happiest about in my career is that I still have the passion I had when I started directing.”