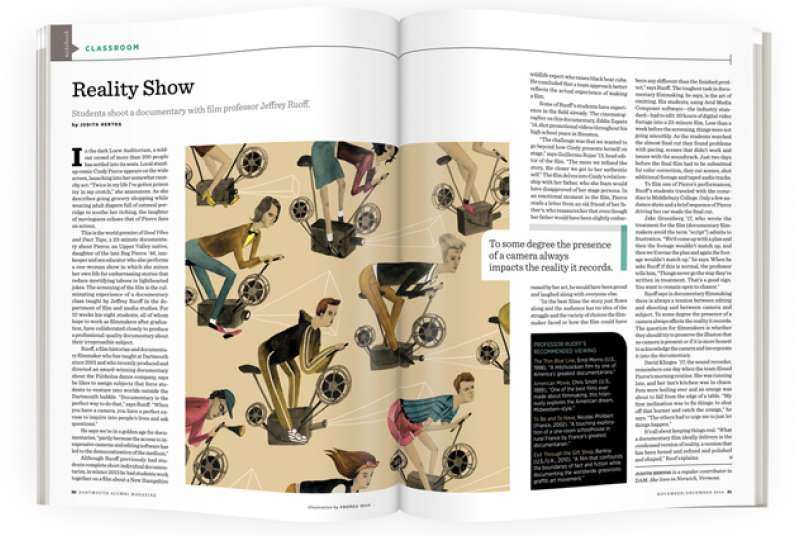 In the dark Loew Auditorium, a sold-out crowd of more than 200 people has settled into its seats. Local stand-up comic Cindy Pierce appears on the wide screen, launching into her somewhat raunchy act: “Twice in my life I’ve gotten poison ivy in my crotch,” she announces. As she describes going grocery shopping while wearing adult diapers full of oatmeal porridge to soothe her itching, the laughter of moviegoers echoes that of Pierce fans on screen.

This is the world premiere of Good Vibes and Duct Tape, a 23-minute documentary about Pierce, an Upper Valley native, innkeeper and sex educator who also performs a one-woman show in which she mines her own life for embarrassing stories that reduce mortifying taboos to lighthearted jokes. The screening of the film is the culminating experience of a documentary class taught by Jeffrey Ruoff in the department of film and media studies. For 10 weeks his eight students, most of whom hope to work as filmmakers after graduation, have collaborated closely to produce a professional-quality documentary about their irrepressible subject.

Ruoff, a film historian and documentary filmmaker who has taught at Dartmouth since 2001 and who recently produced and directed an award-winning documentary about the Pilobolus dance company, says he likes to assign subjects that force students to venture into worlds outside the Dartmouth bubble. “Documentary is the perfect way to do that,” says Ruoff. “When you have a camera, you have a perfect excuse to inquire into people’s lives and ask questions.”

He says we’re in a golden age for documentaries, “partly because the access to inexpensive cameras and editing software has led to the democratization of the medium.”

Although Ruoff previously had students complete short individual documentaries, in winter 2013 he had students work together on a film about a New Hampshire wildlife expert who raises black bear cubs. He concluded that a team approach better reflects the actual experience of making a film.

Some of Ruoff’s students have experience in the field already. The cinematographer on the Pierce documentary, Eddie Zapata ’14, shot promotional videos throughout his high school years in Houston.

“The challenge was that we wanted to go beyond how Cindy presents herself on stage,” says Guillermo Rojas Hernandez ’13, head editor of the film. “The more we refined the story, the closer we got to her authentic self.” The film delves into Pierce’s relationship with her father, the late Reg Pierce ’46, who she fears would have disapproved of her stage persona. In an emotional moment, Pierce reads a letter from an old friend of her father’s, who reassures her that even though her father would have been slightly embarrassed by her act, he would have been proud and laughed along with everyone else.

“In the best films the story just flows along and the audience has no idea of the struggle and the variety of choices the filmmaker faced or how the film could have been any different than the finished product,” says Ruoff.  The toughest task in documentary filmmaking, he says, is the art of omitting. His students—using Avid Media Composer software, the industry standard—had to edit  20 hours of digital video footage into a 23-minute film. Less than a week before the screening, things were not going smoothly. As the students watched the almost final cut they found problems with pacing, scenes that didn’t work and issues with the soundtrack. Just two days before the final film had to be submitted for color correction, they cut scenes, shot additional footage and taped audio tracks.

To film one of Pierce’s performances, Ruoff’s students traveled with the comedian to Middlebury College. Only a few audience shots and a brief sequence of Pierce driving her car made the final cut.

Jake Greenberg ’17, who wrote the treatment for the film (documentary filmmakers avoid the term “script”) admits to frustration. “We’d come up with a plan and then the footage wouldn’t match up. Then we’d revise the plan and again the footage wouldn’t match up,” he says. When he asks Ruoff if this is normal, the professor tells him, “Things never go the way they’re written in treatment. That’s a good sign. You want to remain open to chance.”

Ruoff says in documentary filmmaking there is always a tension between editing and shooting and between camera and subject. To some degree the presence of a camera always impacts the reality it records. The question for filmmakers is whether they should try to preserve the illusion that no camera is present or if it is more honest to acknowledge the camera and incorporate it into the documentary.

David Klinges  ’17, the sound recorder, remembers one day when the team filmed Pierce’s morning routine. She was running late and her inn’s kitchen was in chaos. Pots were boiling over and an orange was about to fall from the edge of a table. “My first inclination was to fix things: to shut off that burner and catch the orange,” he says. “The others had to urge me to just let things happen.”

It’s all about keeping things real. “What a documentary film ideally delivers is the condensed version of reality, a version that has been honed and refined and polished and shaped,” Ruoff explains.

American Movie, Chris Smith (U.S., 1999). “One of the best films ever made about filmmaking, this hilariously explores the American dream, Midwestern-style.”

To Be and To Have, Nicolas Philibert (France, 2002). “A touching exploration of a one-room schoolhouse in rural France by France’s greatest documentarian.”

Exit Through the Gift Shop, Banksy (U.S./U.K., 2010). “A film that confounds the boundaries of fact and fiction while documenting the worldwide grassroots graffiti art movement.”