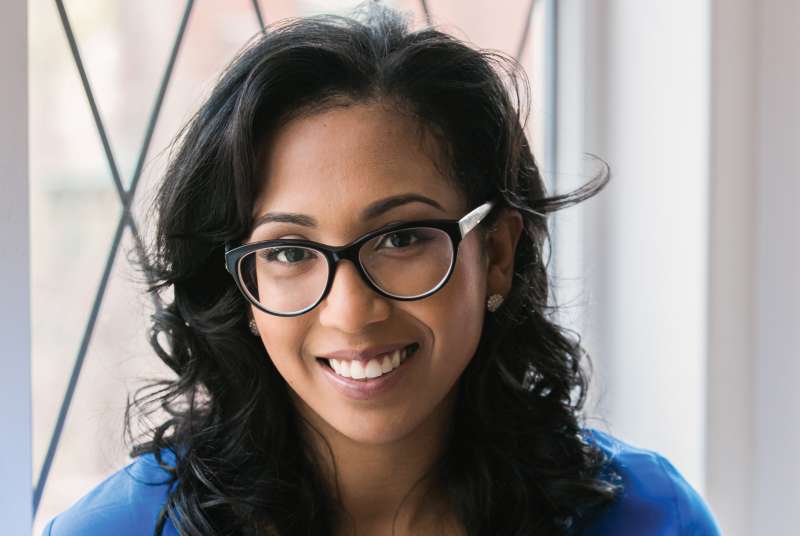 Harvard prof and author Leah Wright Rigueur ’03 discusses the history and future of blacks and the GOP.
Matthew Mosk ’92 | May - Jun 2017

As an assistant professor of public policy, Leah Wright Rigueur focuses on race, civil rights, political ideology, the two-party system and the presidency. Such expertise has made her a go-to commentator lately, and her website, leahrigueur.com, crackles with her opinions. DAM caught up with Wright Rigueur in February to get her take on recent events.

Are you a Republican or Democrat?
Neither. I’ve been a registered independent since I’ve been old enough to vote.

Was he trying to tap into something that is recognizable to you?
I think in a crude way, yes. The cynical response to this is that he’s trying to tap into black dissatisfaction with the Democratic Party. When you look at polls and data, African Americans still hold the Democratic Party and Democratic leaders in high regard. What that masks, however, is an internal dissatisfaction that happens from lack of progress. You can be incredibly happy that unemployment numbers are low, that after the housing crash you didn’t lose your home. But you can still be deeply unhappy that black Americans—particularly younger black men—have almost double the unemployment rate of whites.

Trump has said that in 2020 he expects to get 95 percent of the black vote.
He’s not getting it.

What could he do that would help him with black voters?
He would essentially have to be F.D.R.—or L.B.J.—in order to enact a massive transformation at that level. I can’t even articulate what that thing would be, because it would have to be so transformational.

What’s the near-term future of black participation in the Republican Party?
If participation goes in a direction where a Republican presidential candidate attracts as high as 17 percent of the black vote [compared to the 8 percent that Trump received in 2016] I wouldn’t be shocked. A number that would startle me would be 20 percent. If it drops down to 6 percent or 4 percent, I also wouldn’t be stunned. There is a narrative that exists for both scenarios. There are always going to be black people who vote Republican no matter what. David Duke at one point in one of his races years ago was getting something like 11 percent of the black vote. You’re also going to have some people who say, “You know what? I feel like he benefits my pocket or I really support vouchers and charter schools or….”

Healthcare?
Right. If you get a widespread net gain among various black communities, with black religious conservatives being a possible source, you’ll see the number go up slightly. But black people on average, even though about a third of them still identify as conservative, are very liberal on economics. They’re very liberal on government intervention, even though they don’t trust government intervention. So they’re not single-issue voters. For Republicans to see a significant shift in the black vote, it would take something incredible.

You wrote in your book, The Loneliness of the Black Republican: Pragmatic Politics and the Pursuit of Power (2015), about a speech Jesse Jackson gave at a 1978 special meeting of the Republican National Committee—and how he won them over by laying out a path for the party to win over black voters.
One of the things I just could not explain as I was doing early research was that speech. Every expert, every wonderful archivist or super-smart reference librarian said to me, “I can’t make heads or tails of this,” which, if you’re writing a book, means there’s something there. Why would he meet with the Republican Party, particularly when the party was ostensibly moving to the right? I think a lot of people would have said, “Opportunism,” or maybe, “That’s just like patronage in politics,” or something like that. Those answers felt too easy for me, and I wanted to see where I could take it, particularly since there was almost nothing written about it.

His appearance was part of an effort by the RNC to reintegrate the Republican Party. Jackson wanted to force concessions from the Democratic Party, so he turned to the Republican Party in order to try to leverage black voting power. Though there were some areas of common interest between Jackson and the GOP, Jackson’s vision of equality and the best path to achieving it was too liberal for the Republican Party in the 1970s. The alliance—always fragile—dissolved during the 1980 campaign season as the GOP shifted to the right.

Before your book, had there been a lot of attention paid to the broader topic of black Republicans?
A lot of people would say, “You’re going to [write about] black Republicans, all three of them? Ha, ha, ha, that’s really funny.” When I started doing the fieldwork and the archival work, I’ve got to say that my assumption was the same, that I wouldn’t find anything. The opposite was true. There was so much that it was overwhelming. My first book could have been five or six books. There are various waves that happened among African Americans and the Republican Party, and the work that black Republicans did in the 1960s and the 1970s looks radically different from what’s going on in the 2000s through the present day.

Did your interest in politics first emerge at Dartmouth?
It came much, much later. When I got to college, first I thought, “I want to be a journalist.” Then I started taking a lot of psychology classes: “I’m going to be a forensic psychologist. I’m going to be a forensic pathologist. I’m going to be a criminal profiler.” I went through a phase where I wanted to work for the FBI. Then I took a history class and it was incredible—what I’d been looking for. It was [professor] Ron Edsforth’s U.S. history class, and it was everything. It was politics, it was culture, it was social, just a real look into recent American history. I began taking as many history classes as I could and then expanded it into African American history. I didn’t take very many government classes.

What is next for you?
My next book was conceived to look at black men and women—Democrats, Republicans and independents—who worked in the Reagan White House and the Bush administrations. It’s tentatively called Black Men in a White House.

Will the book now include the Trump administration and HUD Secretary Ben Carson?
I think I have no choice but to talk about that. We’ll see where we go. I have a lot of flexibility because I get to chase down really complex issues of democracy and power and identity, and then offer insightful ways for us to think about them moving forward.

Matthew Mosk is a regular contributor to DAM. An investigative reporter for ABC News, he lives in Annapolis, Maryland.