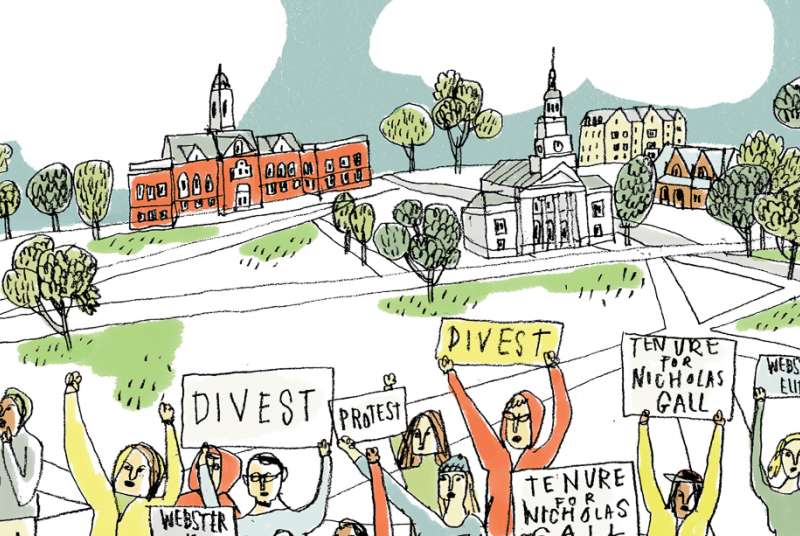 A Devil in the Details

At the exact epicenter of the Webster College campus, which was also the exact epicenter of the open rectangular space known today as the Quad, but formerly (and still formally) as the Billings Lawn, a large and unlovely stump protruded from highly tended grass. The stump was a lonely vestige of the great elms that once loomed over Webster’s buildings and walkways, and filled the forests of New England in general before Dutch elm disease arrived, a half-century earlier. But this particular tree—this particular stump—was not a victim of that arboreal catastrophe; it had been chopped down many years before the first fungus-bearing Scolytus elm-bark beetle had met its first North American victim. That stump went back to the very beginning of Webster’s story and it was a beloved symbol of the college to its graduates. Everyone else had to have it explained to them, but wasn’t that what it meant to be an insider?

The stump had a proper name, naturally—it was “the Webster Elm”—but nobody used that; everybody just called it the Stump. As in: “We’ll meet at the Stump at ten, okay? We can walk over from there.” Or: “Join us every Sunday at eight for sunrise yoga at the Stump!” Or: “Take Back the Night will leave from the Stump at midnight.” And of course there had been protests at the Stump. Many protests, over the years. Many sit-ins and vigils. Webster was populated by students who cared deeply, passionately about things, who thought globally and acted locally, and who had been admitted to Webster, now one of the most selective colleges in the nation, for precisely those reasons. The Stump was where they went when there was something they wanted, or wanted rid of, or when something terrible happened, on campus or in the world—safe spaces for women, dodgy institutional investments, more choices for vegetarians (back when “vegetarian” was radical enough; no one had even dreamed of “vegan”), the raging (sometimes drunken) Indian who once served as the college’s mascot (a slap in the face to those Native American students the college began to recruit in the ’70s) or the disasters—man-made or natural—the wrestling coach actually struck by lightning on the golf course, the student killed in a driving accident while on a study abroad program in Peru, the fall of the Berlin Wall, the fall of the towers, the basketball player dead in his bed from a drunken aspiration of vomit, and once, long ago, when a freshman from the Midwest who turned out to be black arrived on campus to matriculate, an actual encampment at the Stump for nearly a week. So many petitions and expressions of solidarity and rallies and moments of silence! So much empathy and outrage and passionate youthful idealism! But whatever cause or grievance brought Webster students to the Stump, what happened once they got there was always pretty much the same: a clear statement of purpose, a plainly identified leader and lines of communication smartly established with Webster’s president, whoever he was at the time, after which that president would at least pretend to consider the students’ demands or sympathize with their feelings. But then, once the protesters had picketed a trustees’ retreat or a commencement to emphasize their point, the students would always just…go away. Had they graduated? Or transferred? Had Mom or Dad or whoever was paying Webster’s tuition read them the riot act? It didn’t really matter. The students of Webster College had convened, raised their voices, made their points, been heard…and then, having accomplished these things, they had departed, after which Buildings and Grounds would come along to clear away anything left behind. Then the area around the Stump would be reseeded and fenced off to give it a chance to recover. And that would always be the end of that.

Exactly none of these prior protests, therefore, would have offered any guidance to Naomi Roth.

Naomi Roth, who’d arrived at Webster as its first dedicated professor of feminist and gender studies and then became its dean of women’s affairs, and ultimately its first female president, and whose experience at Webster that awful year would come to seem...well, many things: inevitable, unforgiving…tragic, obviously. There were no crucial lessons in the college’s past, no kernels of sage advice from those former Webster presidents still living. It was all a new terrain, baffling and undiscovered, and once the thing began there seemed to be no way of stopping it, at least no way beyond the many ways she did try, and despite how sincerely she offered negotiation, then—to be blunt—capitulation. Nothing worked, and it even occurred to her that what began at the Stump that fall was not so much a protest in the way that she, a former student activist herself, had always understood “protest,” but rather an undefined compulsion to exchange ideas about what was wrong with Webster and wrong with the world. It was almost as if each of the students at the Stump encampment had come with some personal grievance, and in the airing of these grievances there emerged a general, generational, miasma of discontent: about Webster, the country, the way things were, that simply hung over the Billings Lawn and the campus itself, and represented, as Betty Friedan might have said, a problem that had no name. But, it was still Naomi Roth’s problem: first ignored by her, and then irritating to her, and then alarming to her, and then, all at once, intractably complex and a threat to everything she had done at Webster, and everything she was trying to do.

It was Naomi herself who noted the deference paid to one young man, a dark and slight kid in a brown hoodie and heavy rubber boots, caked in November mud. And it was Naomi who asked who he was and began to wonder, possibly aloud, whether he would like to represent the group and talk with her in a calmer way about what was at issue here, and how the administration—how she, Naomi—could begin to make it right.

His name, it would emerge, was Omar, and he was a sophomore from Oklahoma, though he was not, of course, really from Oklahoma. He was from Oklahoma the way someone with an Irish name was from Massachusetts, or someone with a Swedish name was from Minnesota, only not even that, because the Oklahoma address on his Webster application just happened to be that of the foster family he was living with at the time, after earlier stints with other foster families in Milwaukee and Houston. Why Oklahoma? It was one of those questions you sensed there was no point in asking. Why Milwaukee? Why Houston? Why America in the first place?

Another question not worth asking, but for the opposite reason.

His dream among open sewers and plastic bags flapping in the dry air and the sacks of grain from World Concern and the brave little soccer skirmishes on the broken ground under the lights of the perimeter fence…far, far into the distance. The sorrow and boredom and filth, the anguish of watching his loved ones taken, one after the next until he was alone, the ache of wasted time as other boys in other countries got to study, dream, plan, move forward into their futures while he could only sit still: immobilized by frustration, tormented by longing.

Such a terrible story. Such a terrible wonderful story because…look how Omar had journeyed from there to here, from that terrifying sad place to this lovely safe campus: buildings of gray stone, pretty fluttering trees, straight walkways to guide your footfalls as you progressed from destination to destination, and that single, misshapen stump left over from the past, to which you might tie yourself as to the mast of a listing ship. You couldn’t save everyone in the world, of course, but wasn’t it nice to think that a smart boy from such an awful life, burdened by so much suffering, so many losses, might still, incredibly, find himself at a place like Webster College?

Webster College. Once a school of the richest, the WASPiest, the most loutish and most conservative of American men, and then later, after its extraordinary transition in the 1970s, the institution of choice for creative and left-leaning intellectuals of all genders and ethnic varieties. “A small school in the woods, from which, by the Grace of God, we might know His will” had been its motto in the early days, when Josiah Webster hacked his way north from King’s College (later Columbia) to establish his Webster’s Indian Academy beneath the towering elms. Two centuries later, with nary a Native American student in nearly that long, those words—like so much else about Webster—had been revised: “A small school in the woods, from which, by scholarship and thoughtful community, we might know the Universe.”

That was how things stood when Naomi Roth became the college’s seventeenth president, and Omar Khayal, a sophomore from Oklahoma, Milwaukee, Houston, and a refugee camp under Palestinian stars, its doomed and mystifying icon.