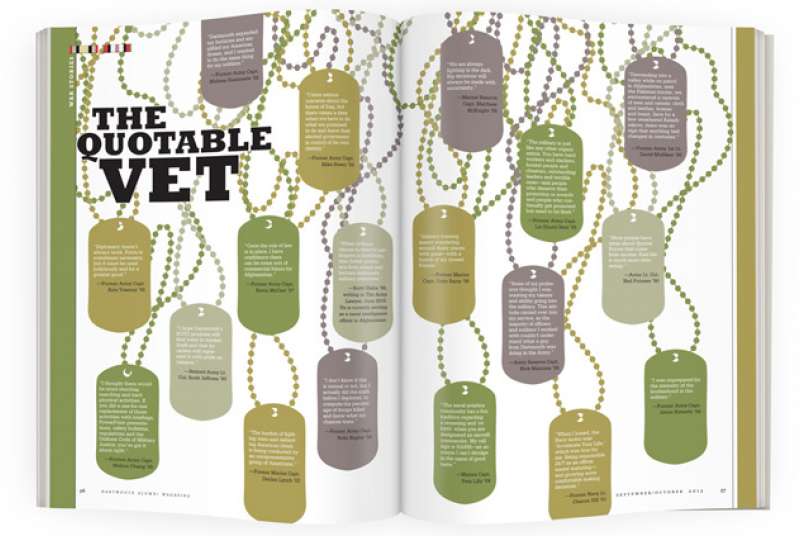 “Diplomacy doesn’t always work. Force is sometimes necessary, but it must be used judiciously and for a greater good.”

“I thought there would be more shooting, marching and hard physical activities. If you did a one-for-one replacement of those activities with briefings, PowerPoint presentations, safety bulletins, regulations and the Uniform Code of Military Justice, you’ve got it about right.”

“Dartmouth expanded my horizons and amplified my American dream, and I wanted to do the same thing for my soldiers.”

“I hope Dartmouth’s ROTC program will find ways to market itself and that its cadets will represent it with pride on campus.”

“I have serious concerns about the future of Iraq, but there comes a time when we have to do what we promised to do and leave their elected government in control of its own destiny.”

“Once the rule of law is in place, I have confidence there can be some sort of commercial future for Afghanistan.”

“The burden of fighting wars and defending American ideals is being conducted by an unrepresentative group of Americans.”

“When civilians choose to directly participate in hostilities, they forfeit protection from attack and become legitimate military objectives.”

—Scott Glabe ’06, writing in The Army Lawyer, June 2010. He is currently serving as a naval intelligence officer in Afghanistan.

“I don’t know if this is normal or not, but I actually did the math before I deployed, to compute the percentage of troops killed and know what my chances were.”

“We are always fighting in the dark. Big decisions will always be made with uncertainty.”

“Infantry training meant wandering around dusty places with guns—with a bunch of my closest friends.”

“The naval aviation community has a fun tradition regarding a renaming and ‘rebirth’ when you are designated an aircraft commander. My call sign is HARM—an acronym I can’t divulge in the name of good taste.”

“The military is just like any other organization. You have hard workers and slackers, honest people and cheaters, outstanding leaders and terrible ones—and people who deserve their promotion or awards and people who continually get promoted but need to be fired.”

“Some of my professors thought I was wasting my talents and ability going into the military. This attitude carried over into my service, as the majority of officers and soldiers I worked with couldn’t understand what a guy from Dartmouth was doing in the Army.”

“When I joined, the Navy motto was ‘Accelerate Your Life,’ which was true for me. Being responsible 24/7 as an officer meant maturing—and growing more comfortable making decisions.”

“Descending into a valley while on patrol in Afghanistan, near the Pakistan border, we encountered a caravan of men and camels: cloth and leather, human and beast. Save for a few weathered Kalashnikovs, there was no sign that anything had changed in centuries.”

“Most people have ideas about Special Forces that come from movies. Real life is much more interesting.”

“I was unprepared for the intensity of the brotherhood in the military.”