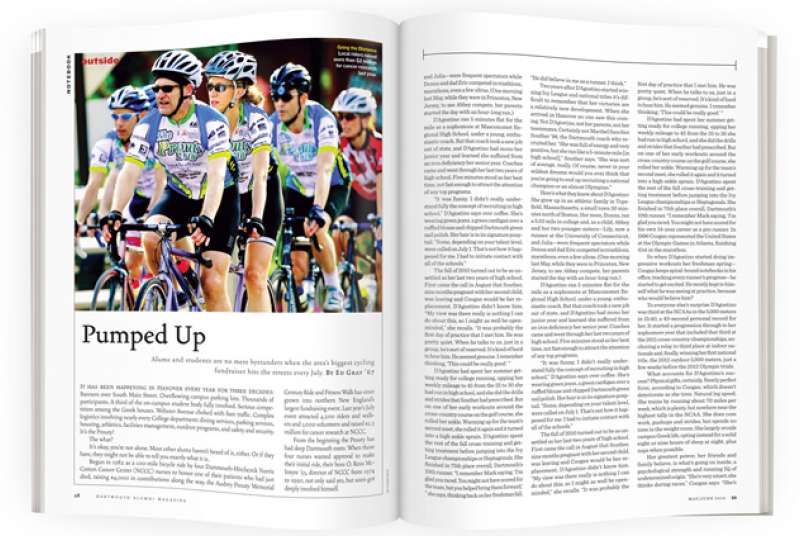 Alums and students are no mere bystanders when the area’s biggest cycling fundraiser hits the streets every July.
Ed Gray ’67 | Jul - Aug 2011

It has been happening in Hanover every year for three decades:

It’s okay, you’re not alone. Most other alums haven’t heard of it, either. Or if they have, they might not be able to tell you exactly what it is.

Begun in 1982 as a 100-mile bicycle ride by four Dartmouth-Hitchcock Norris Cotton Cancer Center (NCCC) nurses to honor one of their patients who had just died, raising $4,000 in contributions along the way, the Audrey Prouty Memorial Century Ride and Fitness Walk has since grown into northern New England’s largest fundraising event. Last year’s July event attracted 4,500 riders and walkers and 1,000 volunteers and raised $2.3 million for cancer research at NCCC.

From the beginning the Prouty has had deep Dartmouth roots. When those four nurses wanted approval to make their initial ride, their boss O. Ross McIntyre ’53, director of NCCC from 1974 to 1990, not only said yes, but soon got deeply involved himself.

“When Patty Carney and the three others came in to see me,” says McIntyre, “I didn’t even know what a ‘century ride’ was. For the first couple of years I didn’t even ride in it. Then when I finally did it was on my wife’s pink, not-so-new three-speed ladies bike. There were cameras rolling, I was paired with Congressman Dick Swett and peddling like a maniac just to make headway and all these folks next to me, including the congressman, were cruising along with no effort.”

One of those cruising along was David Bradley ’58. Soon he and McIntyre were hosting pre-race events at the Occom Pond DOC House and at McIntyre’s farm, just north of Hanover in Lyme, spicing them up with slapstick events that included McIntyre riding into Storrs Pond in a full clown suit and a pyrotechnic event involving a junker bike, a horse-watering tank, a pulley system and a wire-mesh basket filled with flaming wood chips. “That one didn’t really work out,” says McIntyre. “The bike landed half in and half out of the water tank and got pretty beat up. I gave it to Dave.”

For almost 20 years the Prouty cruised along in that vein, growing locally and raising a few more thousand dollars every year. By 2001 there were 650 riders raising $185,000. Respectable, but not enough. “I kept telling them we can raise a million dollars,” says McIntyre, who was by then retired and working with the Friends of Norris Cotton Cancer Center, the group that runs the Prouty. “All we needed were the right people and a harder push.” Both were soon on board in the form of Jean Brown, an organizational and fundraising dynamo disguised as a cheerful former Broadway show singer. In 2006 the event took in $1 million—and doubled that three years later. By then there were more than 4,000 participants, including much of the summer term student body.

“Jean invited me to join her steering committee in the spring of 2005, when I was a junior,” says Russell Lane ’06. “As vice president of Phi Delt I was responsible for the house philanthropic efforts and had worked with her on a couple of their smaller events. When I heard about the Prouty in the summer I figured with about 20 guys living in the house, that’s pretty good manpower across all the houses.” Lane was right, but getting them motivated was another story. “Our 20 guys got up early and volunteered, but that was about it. Until the Wes Chapman awards.”

Wes Chapman ’77, Tu’81, a Hanover resident and enthusiastic Prouty rider, finagled his daughter Emily ’08 and a couple of her friends into volunteering in 2006. “But there wasn’t much interest there,” he laughs. “So I figured, well, I know how to change that. I was in Theta Delt.”

Chapman called friends Peter Volanakis ’77 and Gary ’77 and Jill ’78 Rogers and together they ponied up the cash to support three annual Greek organization Prouty prizes: $1,000 each for most money raised, largest number of volunteers, and the Iron Butt Award for the most house members completing the full 100-mile circuit. The kicker? The money must be spent on social activities and it must be spent that summer. Chapman is a canny investor who knows a multiplier when he sees one. Last summer 302 members of 24 Dartmouth Greek houses raised $35,000 for the Prouty. “I don’t really want to know what the winners do with the prize money,” deadpans Chapman. “I’m just glad to help.”

He’s far from alone. Hanover teacher Judy Csatari ’76 was awarded the prestigious 2009 Heart of the Prouty volunteer award. She had been recruited 10 years before by local realtor Starr Johnson ’70, and she in turn leaned on her daughter Emily ’99 to recruit her Alpha Xi Delta sisters to pitch in. “They manned a stop-and-go station, though they were loathe to use that verb,” laughs Csatari, whose husband, Tom ’74, bikes the Prouty every year. John Pepper ’91, Tu’97, and a team from his company, Boloco, rode and raised $25,000 last year—in addition to providing a couple of thousand burritos to feed the hungry post-ride horde that gathered at the Hanover middle school field.

This July will be the Prouty’s 30th. Organizers, including volunteer Carin Reynolds ’84, a former College rower and coach, have added another element: water. Up to 250 rowers will cover 5-, 10-, 15- or 20-mile stretches of the Connecticut River. They’ll launch from the Dartmouth docks. And next year? Plans are in the works for a group hike up Moosilauke, starting from the College’s Ravine Lodge.

Of course. It’s the Prouty.

Although it’s not a race, the Prouty really is a team-based event. Last year 4,140 out of 5,100 registrants signed on as members of 428 teams. Emblematic of those teams was a highly motivated group of 187 “Big Green Pazooies” gathered around Ann Smolowe ’81 (above with dog). She was dying of cancer, and she knew it. They all knew it.

They don’t come much greener than Smolowe. She skied for the College as an undergraduate, got married in Sanborn Hall, worked in the developement office and, just a month after last year’s Prouty, was eulogized before hundreds in the Bema.

“She lived in my dorm,” recalls Holly Dustin ’81, a Hanover financial advisor. “One day I saw her on her hands and knees, crawling up the stairs after a very strenuous run up Moosilauke. She was on the cross-country ski team, having never done the sport before. There were no cuts—you just had to survive practice. She did. She vomited every day until she got in shape. She came in last in every race, but she won ‘most improved skier’ that year.”

“She had a nonstop energy that fueled every activity we participated in,” says Pat Berry ’81, another close friend. “Ann had an uncanny ability to make you feel you were the center of her thoughts.”

“She was my best friend,” says Dustin. “Toward the end, when she asked for no more visitors, I thought to myself, ‘I’ll just stop by because we are such close friends.’ Then I got there. She had 100 people who thought that!”

In 2009, with her recently treated cancer in apparent remission, Smolowe rode in the Prouty with a small friends-and-family team. They called themselves Pazooie Power, named after a cartoon character created by her uncle to cheer her up when she had rheumatic fever as a young girl. That winter her cancer spread, and so did word of it among some College employees who had a small team called Big Green Fun, run by Smolowe’s development colleague Gregg Cerveny. He and Ann decided to combine their two teams, forming Big Green Pazooie. Word spread. The team grew. Funds poured in. By July 10, 2010, the day of the Prouty, the team had raised more than $90,000, topping all the others. Smolowe was there, surrounded by friends, thanking them all. Five weeks later, she was gone.

Ed Gray is a frequent contributor to DAM. He lives in Lyme, New Hampshire.