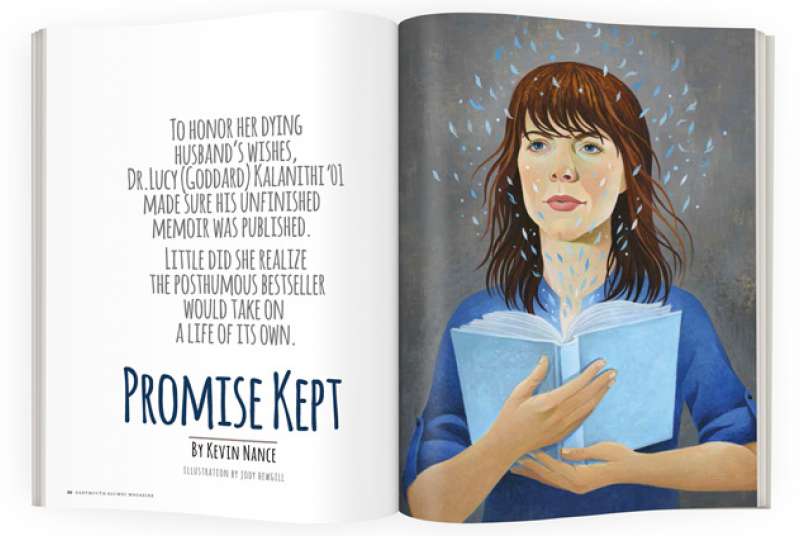 To honor her dying husband’s wishes, Dr. Lucy (Goddard) Kalanithi ’01 made sure his unfinished memoir was published. Little did she realize the posthumous bestseller would take on a life of its own.
Kevin Nance | Jan - Feb 2017

When Dr. Paul Kalanithi died of lung cancer in early 2015, the death came much earlier than it might have—far too soon, in fact, for him to finish the manuscript of When Breath Becomes Air, the book he’d been writing about death and meaning. The prognosis had been anywhere from a few months to a few years, with the outside possibility that Kalanithi might have a full decade left to live. It wasn’t to be. A few days before he died he was in too much pain to write anymore, but the book still wasn’t finished. He turned to his wife, Lucy, once his medical colleague at Stanford. “Can you please get this published?” he asked her.

It was an open question. Random House had acquired the book in a bidding war while it was still barely more than a concept. Kalanithi, a surgeon, had labored to write it. It was extremely uncomfortable for him to remain in the same position for more than a few minutes, so Lucy had gotten him a special adjustable bed and armchair. She had been at his elbow throughout the writing process, even after giving birth on July 4, 2014, to the couple’s daughter, Cady. She had taken him, and the book, this far. She would have to take it the rest of the way.

The morning after he died on March 9, Lucy made phone calls to her husband’s literary agent and editor, neither of whom she had ever spoken to before. “A, I have bad news,” she said. “B, can we still do this?”

The answer was yes. “It was obvious right away that they were both very committed to it,” she recalls. “Random House was also very committed, that was clear.” She asked her husband’s agent, Dorian Karchmar, how she thought the book was going to do in the marketplace. “It’s either going to do really, really well or it’s going to do really, really terribly,” Karchmar responded. “It just depends on whether people are drawn to a book that’s clearly about dying by a man who recently died. I just can’t predict which way it’ll go.”

With so much in the balance, there was still much work to be done. A few weeks after Paul died, his editor, Andy Ward, arrived in the Bay Area to spend three days with Lucy, going over the manuscript line by line and undertaking the delicate process of interpolating three of her husband’s earlier essays—one of which had appeared in The New York Times and gone viral—into the text.

“I feel like my relationship with Paul extends now, through this process. The fact that his legacy is stretching well into the future, through the book, is really central to my life.”

“She was invaluable,” says Ward, Random House’s editor-in-chief. “I can’t really tell you how deeply involved and committed she was to the book and how much of a partner she became in the publishing process. Having never before met me—a stranger at her kitchen table with a laptop and a book on it—she sat there for hours with me, putting together the draft. She was the mother of a 9-month-old whose husband had just died, but she could not have been more focused or more attuned to what the project required. I don’t know many people who could have done what she did. I certainly could not have if I were in her shoes.”

Ward was so impressed by Lucy’s steely resolve, in fact, that he asked her to write an epilogue, telling the story of her husband’s race against death and his heroic struggle to finish the project. “There were a lot of things he never got to write about,” Ward says. “I know what Paul was capable of, and in some ways what the book could have been. But his untimely death also made the book more special, in some way, and in fact that’s what the book is about. To pretend otherwise would be to do it a disservice. And so we asked [Stanford physician and author] Abraham Verghese to write an introduction, but it really fell to Lucy to give the book closure and an ending that it sadly lacked.”

Startled to receive the assignment, Lucy—who had never written anything like it before—obliged a bit dutifully at first. “I started doing it out of a sense of obligation, initially, and then I quickly realized that the way that Paul died was part of the story. I got a chance to reflect on Paul, on his death, and what’s been happening since then. And I started to feel like, ‘Yeah, it makes sense to have that be part of the book.’ Later, of course, there were a lot of things an author would be doing—like approving the copy edits, choosing the cover, promoting the book—and I stepped in to do each of those things.”

She breathes a sigh of what sounds like relief. “It felt really emotionally intense and important, but also wonderful,” she says. “Our marriage and then his illness were so intense, and toward the end of his life we were sort of fused. We worked so hard on making sure he could be writing the book that what I did afterward just seemed like an extension of that. Helping him complete this thing after his death just felt really sustaining to me.”

Perhaps the biggest surprise was the ease with which Lucy shouldered the burden of promoting the book via endless press interviews, book tour appearances and lectures—all while continuing to raise Cady as a single parent and working half-time as a clinical assistant professor of general medicine at Stanford.

“Paul was really gregarious, but also quite introverted in some ways, and his way of coping with that was to write,” she says. “We had kind of opposite personalities, in that sense, because it was always better for me to talk—it was almost like I had a built-in coping system, and the interviews turned out to be something I really enjoyed. I think a lot of people would have felt some of the promotion stuff was excruciating to do, but there’s also the opposite, where the surviving person can feel isolated by the death, not saying the name of the person who died, for example. For me, people are always tweeting things at me, telling me their responses to the book at bookstore events, and it feels great. I feel like I could do Paul’s entire eulogy.”

She pauses. “The hope was that he would at least live to see it published and participate in that,” she says matter-of-factly. “But I feel like my relationship with Paul extends now, through this process. The fact that his legacy is stretching well into the future, through the book, is really central to my life.”

It’s true, too, that her husband’s story reflected her own medical practice’s current focus on end-of-life care and the emotional and ethical issues associated with terminal illness and its care. “It’s given me a connection to patient and caregiver communities in a way that makes me able to talk about the human experience in medicine on both sides during end-of-life care.”

As she writes in the epilogue, her husband in his last days chose to forgo life-support technology and procedures. Instead of intubation and being put on a ventilator that might have extended his life from hours to days, Paul chose to die surrounded by his colleagues in an intensive care unit, cradling his infant daughter in his arms.

Looking back, his wife still marvels at the difficulty of the process—how confusing it was, medically and ethically, to navigate “all the choices we had to make, even though we were both physicians,” she says.

“I was struck by a recent study in which half of critical-care nurses and a quarter of intensive care physicians have considered leaving their jobs because they felt like they were providing care that wasn’t in line with the patient’s values,” she continues. “Specifically these people said they felt that in some cases, rather than prolonging life, they were prolonging the dying process.”

She sighs, then reflects: “There’s a moral distress in medicine about helping patients in these situations. It’s hard to talk about because I don’t want to be prescriptive—and I definitely don’t want to seem to be judging other people’s choices—but Paul’s priorities were mental clarity, the ability to spend time with his family and the ability to keep writing. At the end, those things weren’t possible. And he said, ‘I am ready.’ ”

Paul was ready to die, and he did.

When Breath Becomes Air went on to become a bestseller in January 2016, transfixing readers across the country with the beauty of its prose and its honesty and clarity about what it means to die.

Lucy knew what it meant. She had seen it up close and brought her husband’s testimony to the world. “Suffering and mortality are both everywhere and nowhere at the same time,” she says now. “They’re ubiquitous, but especially in our modern culture, they’re sort of hidden, and so I think people are hungry to read and talk about them.  I’m glad to know that Paul’s message is getting out.” So is hers. A year ago her essay, “My Marriage Didn’t End When I Became a Widow,” appeared in The New York Times, but she doesn’t see herself as a writer. “I’m a better talker,” she says.

Kevin Nance is a freelance writer and book reviewer based in Chicago.