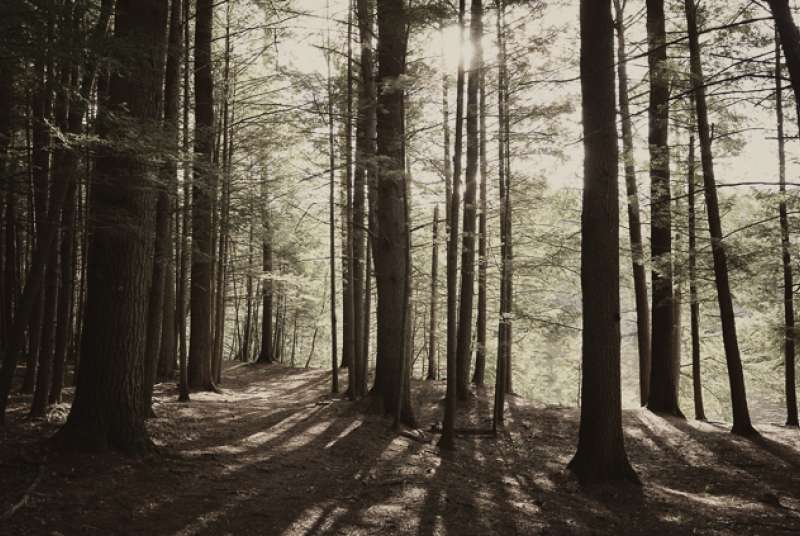 An arboreal update from Pine Park
May - Jun 2019

Loggers selectively removed hundreds of diseased trees—some 150 years old and 100-feet tall—from Pine Park this winter. Fungal attack affecting 12 of the park’s 96 acres led to dangerous conditions and the need for the intervention. “It’s a very sensitive environment,” says Frank Roberts, associate VP of facilities operations and management, “but we saved a lot of trees.” The trails will look different this summer, but the trees and land have been saved for the long run. Here’s a look at some of the details.

Death Zone
In one five-acre section of the park, nearly 75 percent of the standing trees were dead.

The Culprits
Rhizosphaera (needle cast fungus) is an airborne contagion that stripped the pines of all but their youngest needles. Root rot is another fungus, which attacked trees from underground. Weakened, the trees then became easy targets for red turpentine beetles, which “treat the trees like a smorgasbord,” says College forester Kevin Evans. He says increased summer moisture due to climate change only exacerbates the problem: “It’s the perfect storm.”

Why It Was Hazardous
Weak canopies and dead limbs increase the threat of trees falling or losing branches at any time, particularly in windy conditions.

Critter Comforts
The project left at least one dead tree standing per acre for wildlife habitat management, according to Evans. A 50-foot buffer zone of trees remains in place at the river’s edge.

Who Pays?
The logging project was a joint operation between the College and the town of Hanover, which share management responsibility for the park.

What’s Next?
Some trails will remain closed for months. The park’s long-term future isn’t known. Evans, Roberts, Pine Park board members, and other experts hope to come up with a suitable forest management plan that considers the entire park. Questions remain about restoration and replanting.