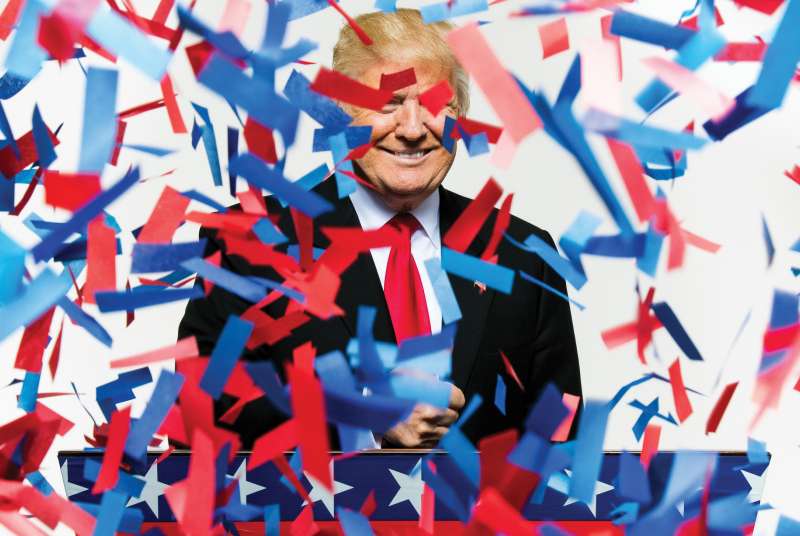 Professor John L. Campbell sheds light on the disruptive forces that paved the way for Trump’s ride to the White House.
Julia M. Klein | May - Jun 2018

The project began as an attempt to explain the ascension of Donald Trump to a foreign audience—specifically, longtime colleagues in Denmark.

On the eve of sociology professor John L. Campbell’s annual spring research sojourn at the Copenhagen Business School in 2016, the Republican presidential primary campaign was in full swing, and Donald Trump “was making a serious run that surprised everybody,” he recalls.

After refining his ideas abroad, Campbell composed a 20-page paper linking Trump’s success to both economic anxieties and racial animus—then placed the paper, unpublished, in a file. “I thought, this is going nowhere because he’s not going to win,” the professor says.

So much for political prognostications. Campbell, who has worked for decades at the intersection of sociology with economics and political theory, has since expanded his analysis of Trump’s electoral triumph into his latest book, American Discontent: The Rise of Donald Trump and Decline of the Golden Age (Oxford University Press). While not entirely discounting the campaign’s twists and turns, he advances a sophisticated, data-backed argument about the long-term trends in American society and politics that he believes enabled Trump’s victory.

“I am writing this book,” he explains in its preface, “both for those who supported Trump and for those who did not—Republicans and Democrats. We all need to understand what the forces were that propelled someone like this so rapidly and so unexpectedly to the pinnacle of political power in America. We need to understand that Trump’s rise to power was the culmination of deep trends in American society that had been developing for decades.”

Campbell has been researching those trends from a variety of angles since earning his doctorate in sociology and studying comparative political economy at the University of Wisconsin. “I wear both hats,” he says. (His title at the Copenhagen Business School is visiting professor of political economy.)

The red thread running through Campbell’s book is economics.

Campbell acknowledges the role that “proximate” causes played in the presidential election—the impact, among other factors, of Russian interference, WikiLeaks, the weaknesses of Hillary Clinton’s campaign and the last-minute reopening of the FBI investigation into her use of a private email server. What he calls “the media’s ratings-driven pandering to sensationalism,” which made Trump omnipresent on television, also mattered.

All the same, “Hillary should have just cleaned up in this election,” says Campbell. “Why was it so close?”

Campbell’s book points to disruptions in the American economy, racial and ethnic resentments, an ideological shift to the right and increasing political polarization. These interrelated trends, he writes, were exacerbated by the 2008 financial crisis, the election of Barack Obama and controversy around the Affordable Care Act, all of which led to gridlock in Washington. “A tipping point had been reached,” Campbell writes.

The red thread running through Campbell’s book is economics. “Trump’s main message,” he says, “was a pitch to the middle class and the working class that have been taking it on the chin” because of wage stagnation, lost manufacturing jobs, rising inequality and the erosion of the American dream of upward mobility.

Campbell suggests that Trump’s slogan, “Make America Great Again,” drew its force from economic woes afflicting the country since the 1970s. “People have had a hard time for a long time, decades now, making ends meet,” he says. One interesting detail: Studies have shown that white working-class voters, one core Trump constituency, were particularly worried about “intergenerational mobility”—the likelihood of their children doing better than they had.

Campbell is sympathetic to those concerns, but notes that Trump “was a master at wrapping economic issues in nationalist, xenophobic, racist and in some cases sexist rhetoric.” While Trump targeted trade policies and immigration, Campbell argues that “the real culprits were often automation, computerization and corporate moves to streamline their operations.”

To those factors, Campbell adds the rightward drift of American politics, including the ascendance of economic “neoliberalism,” or free-market fundamentalism, at the expense of the Keynesian view that government should play a greater role in regulating the economy. Trump’s desire to cut both regulations and taxes was “straight out of the neoliberal playbook,” Campbell writes, even if Trump’s protectionist stances on trade and tough anti-immigrant rhetoric were not.

Finally, Campbell writes, all these trends contributed to increased political polarization—and the fallout from the financial crisis and Obama’s election pushed acrimony into gridlock.

So, how has Trump done so far?

“He’s initially tried to do a lot of the stuff he promised to do, but it hasn’t gone very well for the guy,” Campbell says, in part because of a dysfunctional Republican Congress hamstrung by its own ideological divisions.

Given his past prognostications, Campbell is reluctant to predict the outcome of the upcoming midterm elections, let alone Trump’s 2020 chances. But his book offers this assessment: Until America’s discontent subsides, he writes, “we will continue to experience plenty of political turbulence.”