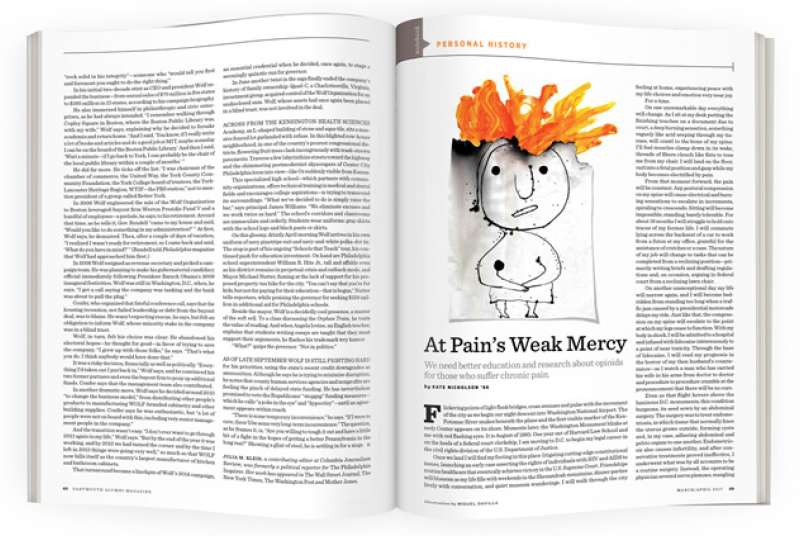 We need better education and research about opioids for those who suffer chronic pain.
kate nicholson ’86 | Mar - Apr 2017

Flickering points of light flank bridges, cross avenues and pulse with the movement of the city as we begin our night descent into Washington National Airport. The Potomac River snakes beneath the plane and the first visible marker of the Kennedy Center appears on its shore. Moments later, the Washington Monument blinks at me with red flashing eyes. It is August of 1993. One year out of Harvard Law School and on the heels of a federal court clerkship, I am moving to D.C. to begin my legal career in the civil rights division of the U.S. Department of Justice.

Once we land I will find my footing in this place: litigating cutting-edge constitutional issues, launching an early case asserting the rights of individuals with HIV and AIDS to routine healthcare that eventually achieves victory in the U.S. Supreme Court. Friendships will blossom as my life fills with weekends in the Shenandoah mountains, dinner parties lively with conversation, and quiet museum wanderings. I will walk through the city feeling at home, experiencing peace with my life choices and emotion very near joy.

On one unremarkable day everything will change. As I sit at my desk putting the finishing touches on a document due to court, a deep burning sensation, something vaguely like acid seeping through my tissues, will crawl to the bone of my spine. I’ll feel muscles clamp down in its wake, threads of fibers clench like fists to toss me from my chair. I will land on the floor, curl into a fetal position and gasp while my body becomes electrified by pain.

From that moment forward, the pain will be constant. Any postural compression on my spine will cause electrical and burning sensations to escalate in increments, spiraling to crescendo. Sitting will become impossible; standing, barely tolerable. For about 18 months I will struggle to hold onto traces of my former life. I will commute lying across the backseat of a car to work from a futon at my office, grateful for the assistance of crutches or a cane. The nature of my job will change to tasks that can be completed from a reclining position—primarily writing briefs and drafting regulations and, on occasion, arguing in federal court from a reclining lawn chair.

On another unexceptional day my life will narrow again, and I will become bedridden from standing too long when a traffic jam caused by a presidential motorcade delays my ride. Just like that, the compression on my spine will escalate to the point at which my legs cease to function. With my body in shock, I will be admitted to a hospital and infused with lidocaine intravenously to a point of near toxicity. Through the haze of lidocaine, I will read my prognosis in the horror of my then husband’s countenance—as I watch a man who has carried his wife in his arms from doctor to doctor and procedure to procedure crumble at the pronouncement that there will be no cure.

Even as that flight hovers above the luminous D.C. monuments, this condition burgeons, its seed sown by an abdominal surgery. The surgery was to treat endometriosis, in which tissue that normally lines the uterus grows outside, forming cysts and, in my case, adhering abdominal and pelvic organs to one another. Endometriosis also causes infertility, and after conservative treatments proved ineffective, I underwent what was by all accounts to be a routine surgery. Instead, the operating physician severed nerve plexuses, mangling thousands of nerves serving my pelvis, legs and lower spine. I became symptomatic, as is often the case, only when the damaged nerves regenerated.

Once released from the hospital to the soft prison of my bed, day and night, I will lie awake at pain’s weak mercy. My treating physicians will persist with increasingly invasive interventions aimed at blocking, burning and ablating the source nerves, including a surgery by a crackerjack team, but nothing will touch the pain.

Eventually, grave-faced and compassionate, my lead physician will preface his decision to cease aggressive interventions and begin a palliative course of high-dose opioids, as if reading from a philosophical treatise. “There comes a time,” he will explain, “when the call to do no further harm eclipses all other considerations.” Unconvinced, I will begin a course of a long-acting opioid, supplemented by shorter-acting medication to be used only when the pain goes into an escalating pattern.

And then something remarkable will occur. As soon as the medications begin to build in my system I will improve. Space will clear in my mind and I will find the resources to resume work, running a program overseeing civil rights cases in U.S. attorney’s offices across the country—something I can do remotely from a computer screen, a telephone and a well-camouflaged bed.

Health will return gradually. A medical device called a spinal stimulator and a self-discovered, body-based form of meditation in which I learn to lower my heartbeat and blood pressure, combined with considerable physical rehabilitation and other integrative treatments, will slowly reverse the course of a condition that was supposed to only deteriorate.

When my flight lands in Washington, D.C., it leads to a very different life than the one I anticipated during my years at Dartmouth and Harvard. Everything I believed my life would become disappeared into the pain—my marriage, my ability to have children, my ability to walk and function for more than two decades. Despite grim medical predictions and a harrowing, 20-year journey through intractable pain and disability, I eventually arrive at, if not a cure, healing. I am recently off all pain medication and restored to walking, even hiking, in the world.

As many as 100 million Americans experience chronic pain—more than those affected by heart disease, diabetes and cancer combined—and for 30 million the pain is so debilitating they cannot function. Yet less than 1 percent of the research budget of the National Institutes of Health is earmarked for pain, and pain is scarcely addressed in medical education.

Even as our medical system buckles under the weight of chronic illnesses that demand a new approach, our public policy regarding opioid abuse is chilling treatment. Opioids are one of the most powerful pain medications we have, but they are too freely given to some and denied to others who might truly benefit. Instead of focusing on education, the proper screening of patients to determine whether and where opioid treatment is appropriate and research into alternative pain medications and treatments, we prosecute physicians, creating a culture of fear and distrust in which doctors are reluctant to use opioids even where appropriate and medical students are disinclined to join the already insufficient supply of physicians specializing in pain management.

Against this backdrop I write, speak and advocate, plying my legal and policy connections and telling my story in the hope that an experience shared by too many may no longer be one of suffering heeded by few.

Kate Nicholson is writing a book on her experiences with chronic pain.