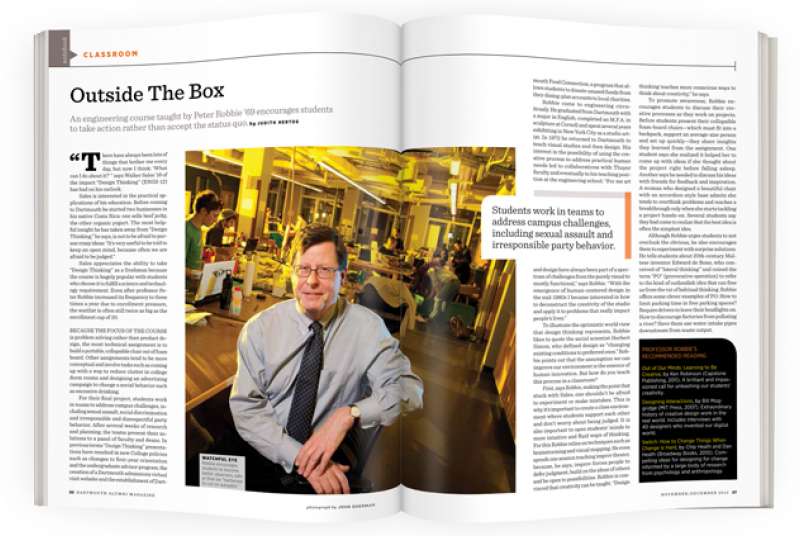 “There have always been lots of things that bother me every day, but now I think: ‘What can I do about it?’ ” says Walker Sales ’16 of the impact “Design Thinking” (ENGS 12) has had on his outlook.

Sales is interested in the practical applications of his education. Before coming to Dartmouth he started two businesses in his native Costa Rica: one sells beef jerky, the other organic yogurt. The most helpful insight he has taken away from “Design Thinking,” he says, is not to be afraid to pursue crazy ideas: “It’s very useful to be told to keep an open mind, because often we are afraid to be judged.”

Sales appreciates the ability to take “Design Thinking” as a freshman because the course is hugely popular with students who choose it to fulfill a science and technology requirement. Even after professor Peter Robbie increased its frequency to three times a year due to enrollment pressure, the waitlist is often still twice as big as the enrollment cap of 20.

Because the focus of the course is problem solving rather than product design, the most technical assignment is to build a portable, collapsible chair out of foam board. Other assignments tend to be more conceptual and involve tasks such as coming up with a way to reduce clutter in college dorm rooms and designing an advertising campaign to change a social behavior such as excessive drinking.

For their final project, students work in teams to address campus challenges, including sexual assault, social discrimination and irresponsible and disrespectful party behavior. After several weeks of research and planning, the teams present their solutions to a panel of faculty and deans. In previous terms “Design Thinking” presentations have resulted in new College policies such as changes to first-year orientation and the undergraduate advisor program, the creation of a Dartmouth admissions virtual visit website and the establishment of Dartmouth Food Connection, a program that allows students to donate unused funds from their dining-plan accounts to local charities.

Robbie came to engineering circuitously. He graduated from Dartmouth with a major in English, completed an M.F.A. in sculpture at Cornell and spent several years exhibiting in New York City as a studio artist. In 1972 he returned to Dartmouth to teach visual studies and then design. His interest in the possibility of using the creative process to address practical human needs led to collaborations with Thayer faculty and eventually to his teaching position at the engineering school. “For me art and design have always been part of a spectrum of challenges from the purely visual to mostly functional,” says Robbie. “With the emergence of human-centered design in the mid-1980s I became interested in how to deconstruct the creativity of the studio and apply it to problems that really impact people’s lives.”

To illustrate the optimistic world view that design thinking represents, Robbie likes to quote the social scientist Herbert Simon, who defined design as “changing existing conditions to preferred ones.” Robbie points out that the assumption we can improve our environment is the essence of human innovation. But how do you teach this process in a classroom?

First, says Robbie, making the point that stuck with Sales, one shouldn’t be afraid to experiment or make mistakes. This is why it’s important to create a class environment where students support each other and don’t worry about being judged. It is also important to open students’ minds to more intuitive and fluid ways of thinking. For this Robbie relies on techniques such as brainstorming and visual mapping. He even spends one session teaching improv theater, because, he says, improv forces people to defer judgment, build on the ideas of others and be open to possibilities. Robbie is convinced that creativity can be taught. “Design thinking teaches more conscious ways to think about creativity,” he says.

To promote awareness, Robbie en-courages students to discuss their creative processes as they work on projects. Before students present their collapsible foam-board chairs—which must fit into a backpack, support an average-size person and set up quickly—they share insights they learned from the assignment. One student says she realized it helped her to come up with ideas if she thought about the project right before falling asleep. Another says he needed to discuss his ideas with friends for feedback and inspiration. A woman who designed a beautiful chair with an accordion-style base admits she tends to overthink problems and reaches a breakthrough only when she starts tackling a project hands-on. Several students say they had come to realize that the best idea is often the simplest idea.

Although Robbie urges students to not overlook the obvious, he also encourages them to experiment with surprise solutions. He tells students about 20th-century Maltese inventor Edward de Bono, who conceived of “lateral thinking” and coined the term “PO” (provocative operation) to refer to the kind of outlandish idea that can free us from the rut of habitual thinking. Robbie offers some clever examples of PO: How to limit parking time in free parking spaces? Require drivers to leave their headlights on. How to discourage factories from polluting a river? Have them use water-intake pipes downstream from waste output.

Sales’ team used a PO solution for its final project challenge, which asked howstudents could be encouraged to party more responsibly. The team’s concept: Install mirrored walls in party spaces so partygoers will constantly be confronted with their own behavior.

Robbie contends that sometimes a keen observer notices problems that those affected can’t articulate. He asks students to always carry a notebook to write down thoughts and observations. For one assignment, students spend three hours in a public place—the library, a coffee shop, a party—just to scrutinize people’s behavior. The stretch of time is important, explains Robbie, because true observation happens only after we have immersed ourselves in an environment to such a degree that we can let go of our preconceptions and the noise of our own thoughts. “We’re cognitively hardwired to run on autopilot,” says Robbie.

Robbie explains that 20 years ago product designers began to realize that the same principles used to create luxury products could be used to solve problems in the developing world. IDEO, a premier design consulting firm, started a separate nonprofit organization, IDEO.org, to support such projects and create a toolkit of human-centered design principles for nonprofits, the key suggestion of which is to carefully observe people’s needs before developing solutions.

Sarah-Marie Hopf ’13, who took “Design Thinking” in winter 2011, was so intrigued by this humanitarian aspect of design that she made it the topic of her honors thesis. An anthropology major and one of the initiators of the Dartmouth Food Connection, Hopf traveled to Myanmar, Nepal and Cambodia to investigate how elements of  IDEO.org translate cross-culturally. She is now back in Cambodia, researching the impact of human-centered design on economic development. “ ‘Design Thinking’ opened my eyes to the connection between anthropology and design,” says Hopf. “It is almost like a way of being, a way of seeing the world.”

Such an attitude is exactly what Robbie likes to see in his students. “My goal is to foster in students a sense of self-efficacy, the confidence that they are able to make an impact on the world and shape their environment,” he says. “Having such creative confidence is an ability all educated people should have.”

Professor Robbie’s Recommended Reading
Out of Our Minds: Learning to Be Creative, by Ken Robinson (Capstone Publishing, 2011). A brilliant and impassioned call for unleashing our students’ creativity.

Switch: How to Change Things When Change is Hard, by Chip Heath and Dan Heath (Broadway Books, 2010). Compelling ideas for designing for change informed by a large body of research from psychology and anthropology.

dschool.stanford.edu. Home of the Hasso Plattner Institute of Design at Stanford, a leading design school.

Annette Gordon-Reed ’81
“Growing Up with Juneteenth”
Historian writes about celebrating Juneteenth in Texas as a child.

Jamal Brown ’08
Personal/Political
The press secretary for Joe Biden’s presidential campaign talks about what motivates him.