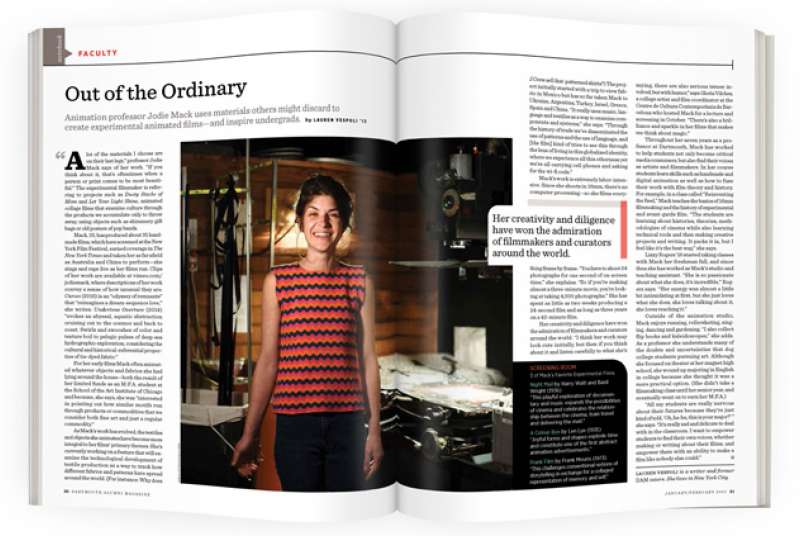 Out of the Ordinary

“A lot of the materials I choose are on their last legs,” professor Jodie Mack says of her work. “If you think about it, that’s oftentimes when a person or print comes to be most beautiful.” The experimental filmmaker is referring to projects such as Dusty Stacks of Mom and Let Your Light Shine, animated collage films that examine culture through the products we accumulate only to throw away, using objects such as shimmery gift bags or old posters of pop bands.

Mack, 33, has produced about 35 handmade films, which have screened at the New York Film Festival, earned coverage in The New York Times and taken her as far afield as Australia and China to perform—she sings and raps live as her films run. Clips of her work are available at vimeo.com/jodiemack, where descriptions of her work convey a sense of how unusual they are. Curses (2016) is an “odyssey of remnants” that “reimagines a dream-sequence love,” she writes. Undertone Overture (2014) “evokes an abyssal, aquatic abstraction cruising out to the cosmos and back to coast. Swirls and swooshes of color and texture boil to pelagic pulses of deep-sea hydrographic exploration, considering the cultural and historical-referential properties of tie-dyed fabric.”

For her early films Mack often animated whatever objects and fabrics she had lying around the house—both the result of her limited funds as an M.F.A. student at the School of the Art Institute of Chicago and because, she says, she was “interested in pointing out how similar motifs run through products or commodities that we consider both fine art and just a regular commodity.”

As Mack’s work has evolved, the textiles and objects she animates have become more integral to her films’ primary themes. She’s currently working on a feature that will examine the technological development of textile production as a way to track how different fabrics and patterns have spread around the world. (For instance: Why does J.Crew sell ikat-patterned shirts?) The project initially started with a trip to view fabric in Mexico but has so far taken Mack to Ukraine, Argentina, Turkey, Israel, Greece, Spain and China. “It really uses music, language and textiles as a way to examine components and systems,” she says. “Through the history of trade we’ve disseminated the use of patterns and the use of language, and [the film] kind of tries to see this through the lens of living in this globalized identity, where we experience all this otherness yet we’re all carrying cell phones and asking for the wi-fi code.”

Mack’s work is extremely labor-intensive. Since she shoots in 16mm, there’s no computer processing—so she films everything frame by frame. “You have to shoot 24 photographs for one second of on-screen time,” she explains. “So if you’re making almost a three-minute movie, you’re looking at taking 4,000 photographs.” She has spent as little as two weeks producing a 24-second film and as long as three years on a 42-minute film.

Her creativity and diligence have won the admiration of filmmakers and curators around the world. “I think her work may look cute initially, but then if you think about it and listen carefully to what she’s saying, there are also serious issues involved, but with humor,” says Gloria Vilches, a collage artist and film coordinator at the Centre de Cultura Contemporània de Barcelona who hosted Mack for a lecture and screening in October. “There’s also a brilliance and sparkle in her films that makes me think about magic.”

Throughout her seven years as a professor at Dartmouth, Mack has worked to help students not only become critical media consumers, but also find their voices as artists and filmmakers. In her course students learn skills such as handmade and digital animation as well as how to fuse their work with film theory and history. For example, in a class called “Reinventing the Reel,” Mack teaches the basics of 16mm filmmaking and the history of experimental and avant-garde film. “The students are learning about histories, theories, methodologies of cinema while also learning technical tools and then making creative projects and writing. It packs it in, but I feel like it’s the best way,” she says.

Lizzy Rogers ’16 started taking classes with Mack her freshman fall, and since then she has worked as Mack’s studio and teaching assistant. “She is so passionate about what she does, it’s incredible,” Rogers says. “Her energy was almost a little bit intimidating at first, but she just loves what she does, she loves talking about it, she loves teaching it.”

Outside of the animation studio, Mack enjoys running, rollerskating, singing, dancing and gardening. “I also collect flip books and kaleidoscopes,” she adds. As a professor she understands many of the doubts and uncertainties that dog college students pursuing art. Although she focused on theater at her magnet high school, she wound up majoring in English in college because she thought it was a more practical option. (She didn’t take a filmmaking class until her senior year, and eventually went on to earn her M.F.A.)

“All my students are really nervous about their futures because they’re just kind of told, ‘Oh, ha-ha, this is your major?’ ” she says. “It’s really sad and delicate to deal with in the classroom. I want to empower students to find their own voices, whether making or writing about their films, and empower them with an ability to make a film like nobody else could.”

Night Mail by Harry Watt and Basil Wright (1936)
“This playful exploration of documentary and music expands the possibilities of cinema and celebrates the relationship between the cinema, train travel and delivering the mail.”

A Colour Box by Len Lye (1935)
“Joyful forms and shapes explode time and constitute one of the first abstract animation advertisements.”

Frank Film by Frank Mouris (1973)
“This challenges conventional notions of storytelling in exchange for a collaged representation of memory and self.”

Googolplex by Lillian Schwartz (1972)
“This piece foreshadows the role of abstract animation as a ‘screensaver’ or backdrop for musical performance.”

Thought City by Stefan Gruber (2000)
“Unlike any animation I’ve ever seen, this exercise in ‘maximum cycles’ constructs a dance of daily monotony.”

Lauren Vespoli is a writer and former DAM intern. She lives in New York City.