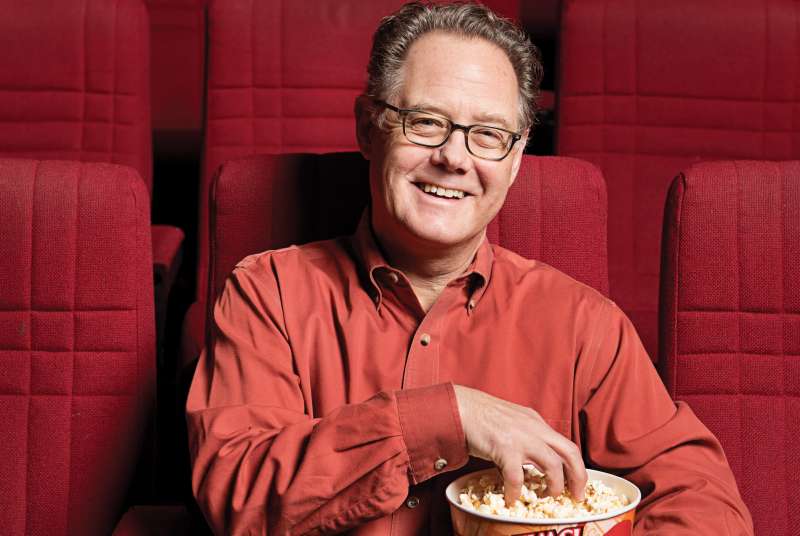 “Oscar Night Is a Work Night”

Boston Globe film critic Ty Burr ’80 zooms in on the current state of movies and explains what it’s like to scribble notes in the dark.
Sean Plottner | Mar - Apr 2018

How would you evaluate 2017 for movies?
I would say it’s been a surprisingly good year.

Is the movie-going experience getting any better?
Theaters are fighting against a tide of people staying home to watch movies. My college-aged kids rarely go to theaters. I think the multiplex economic model is broken. I don’t know that they’re going to fix it in a way that will bring us back to theaters. And the quality of the projection, in most multiplexes, is abysmal. It’s a scandal. If the movie looks dark, it’s the projection, not the movie.

We’ve listed your Top 10 list here. Do you ever do a “Worst of the Year” list?
I have in the past, but life’s too short.

Can you make an exception and tell us about an awful film you saw recently?
Sometimes a movie is so bad it’s good, and it can be fun to go to town on it, but nobody sets out to make a bad movie. There’s one called The Book of Henry, about a brilliant child, that gets more demented and insane as the movie goes on. You have to see it to believe it. It’s the most bat-shit insane movie I saw all year. It’s supposed to be moving, but your jaw’s on the floor and you’re going, “Who green-lit this thing?”

Do you ever hear from the subjects of your reviews?
Rarely. Once a director got angry at me for panning his art house movie. I responded by saying, “You know what? Everybody loved your movie. Don’t get bent out of shape about the one guy who didn’t.”

Do you still go to theaters for advance screenings?
In most cases I’m at the AMC Boston Common downtown, usually in the afternoon at 2 and evenings at 7. All the major studios and most of the major indies screen for us. They don’t want to make their films available at home because they’re terrified of piracy and because you should see movies in a theater. Some of the smaller independent movies and documentaries, yeah, I’ll get those on disc. I much prefer the big screen, honestly.

“Mediocre movies are the hardest to review. What fresh thing can you come up with to say?”

Do you write notes in the theater?
I’m constantly scribbling. I write in the dark and sometimes can’t read them afterwards.

Are some movies more of a challenge to write about than others?
Mediocre movies are the hardest to review. What fresh thing can you come up with to say about some of these products?

Are you always on the lookout to avoid overusing certain adjectives in your reviews?
You can get over-descriptive, and it can be a problem. I teach some film criticism courses around Boston, and I tell students there are empty-calorie words such as “amazing” and “awesome.” These don’t really convey any actual meaning other than bigness. When I first started at The Globe somebody said, “Don’t ever use the word ‘compelling.’ Whenever a movie is called compelling, I know it’s going to bore me.”

Why did you go to Dartmouth?
I applied early decision and got in. I liked the fact that it was in the middle of nowhere, and I liked the nature. Ironically, I ended up doing hardly any outdoor stuff and spent most of my time inside watching movies. I got my film education at Dartmouth. I took a year off to run the Dartmouth Film Society, which was a full-time job. It usually went to a just-graduated senior, but there was nobody around to do it after my sophomore year. I was also lucky to have as professors [former blacklisted] screenwriter Maury Rapf ’35 and [former producer and film distributor] Arthur Mayer, who was present at the very beginning of the film industry and taught film history at Dartmouth in the 1970s.

Were you aware then of the work of New York Times film critic Vincent Canby ’45?
Yes, and he was a good critic. I admired his stuff, and he had a good long run from the 1970s to the 1990s. I disagreed with him a bunch of times, but that’s not the point. What matters is how critics write, what they write and how they discuss any larger issues that a movie deals with. He was solid.

Are there any actors you would encourage to stop making films right now?
Every now and then I go back and watch Al Pacino in The Godfather—he’s just so quiet, and he’s so good in that movie, and it’s so funny he turned into latter-day Pacino. Sometimes he’s seriously entertaining, but I feel like whatever art he felt he was bringing to the movies was unappreciated, so he just decided to play to the back seats. When he did, like with Scent of a Woman, he wins an Oscar, so he did more of it. Hoo-ah. The actors in that generation, I think it’s tough for them because they were so lionized when they were young.

What actors or directors are must-sees for you, regardless of the project?
Todd Haynes, Richard Linklater, the Coen brothers. Even if they misfire, they’re doing something interesting. Ryan Gosling I’ll always watch.

What’s your take on online review aggregators such as Rotten Tomatoes?
I like Metacritic a bit more, because I think its metrics make more sense. It’s more nuanced. Rotten Tomatoes doesn’t tell you as much.

What’s Oscar night like for you?
My wife has Oscar parties at home—and I’m at the office, listening to the TV while I stare at my computer and write for the early edition and then for the late edition. Oscar night is a work night.

Have you written any scripts you’ll someday take to Hollywood?
No. I wrote some with a writing partner when I was in my 20s. They are among the worst screenplays ever written. I can’t write dialogue. I realized long ago I’m an essayist, not a plot writer, and I’m perfectly happy with that.

“It was harder than ever for me to pick a Top 10 this year,” says Burr, a Pulitzer finalist last year. “I have a No. 1, which I really liked, and then nine in alphabetical order, because I feel every movie is like a two-hour window into an alien planet—you can’t compare each one.”