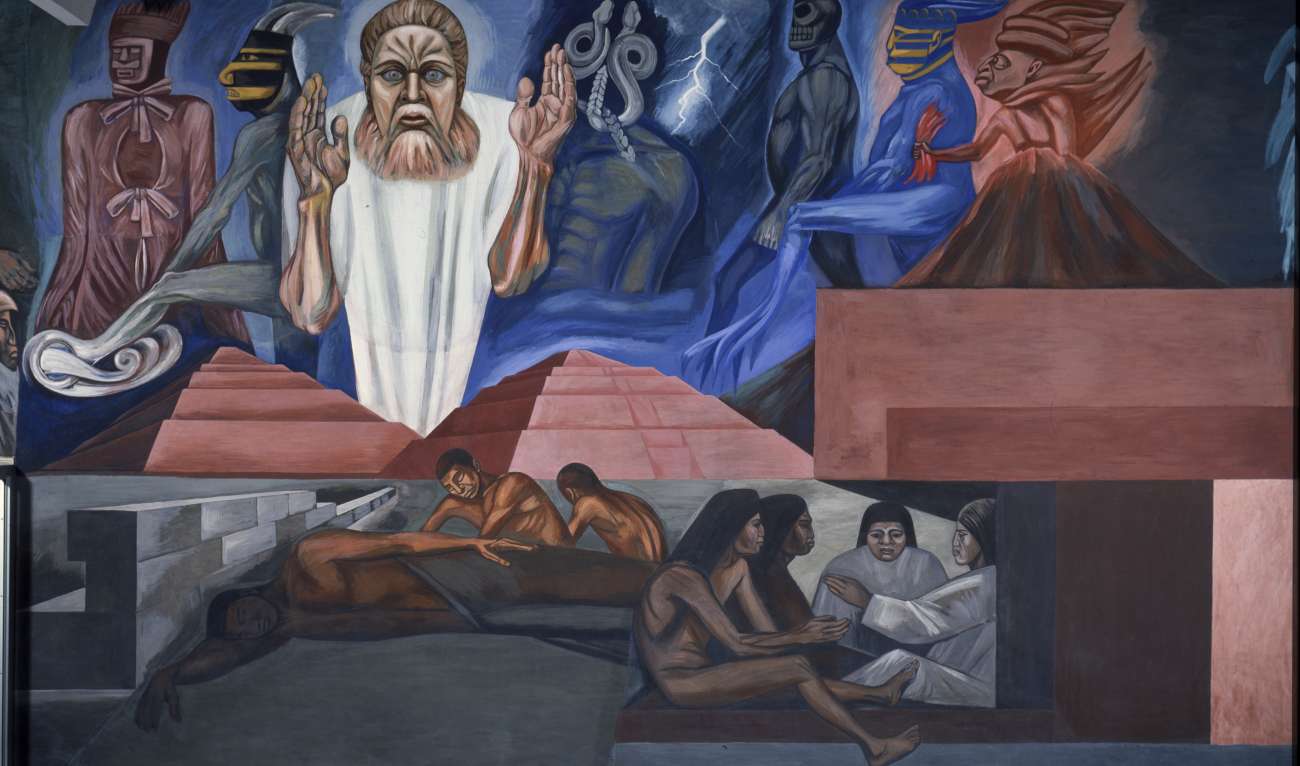 The Mural of the Story

You’ve seen artist José Clemente Orozco’s The Epic of American Civilization on the walls of Baker-Berry Library’s basement reading room. Its 24 panels, covering approximately 3,200 square feet, depict the influence of indigenous and European cultural currents on America, which Orozco, who was Mexican, called “an authentic New World civilization.” Here are 10 things you may not know about the striking national historic landmark that was painted between 1932 and 1934.

1. Artist José Clemente Orozco deployed the technique of true fresco (or buon fresco), which means he was painting on moist plaster with colors ground up in water or limewater.

2. The artist tested the medium in a nearby Baker hallway before he went all-in. His trial efforts remain in place.

3. Students assisted the painter by hauling plaster up scaffolds for Orozco to apply.

4. Orozco was the second artist-in-residence at the College. The first was Guatemalan artist Carlos Sanchez, class of 1923, who later helped Orozco paint his Epic.

5. One of the world’s leading authorities on the murals is right here on campus: associate professor of art history Mary Coffey. Her massive new study of the murals, Orozco’s American Epic: Myth, History and the Melancholy of Race, will be published in January.

6. The Hood Museum has more than 250 preliminary drawings Orozco made as he was planning to paint the murals. One sketch is of George Washington, which evolved into the figure of a schoolteacher in the final work.

7. The painter used a student model to draw a sketch that evolved into the figure of a worker resting in one of the panels.

8. The murals have been set to music. To commemorate the College’s 250th anniversary this year, the Dartmouth Symphony Orchestra commissioned a cello concerto based on the art. Noah Luna’s composition, The Epic of American Civilization, a Tone Poem for Cello and Orchestra, debuted last May at the Hop.

9. A Hood Museum web app, Dartmouth Digital Orozco, offers high-resolution, up-close access to the murals. If you can’t see them in person, this is the next best way to view this masterpiece.

10. The artist painted with only his right hand—a fireworks accident earlier in life led to the amputation of his left hand.