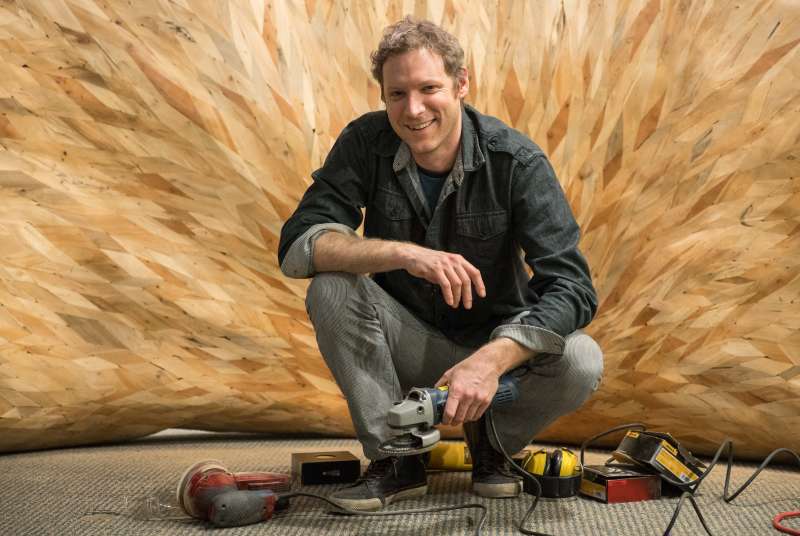 Photo by Eli Burakian ’00
Voices in the Wilderness

Visiting professor of studio art Beale stood beside a brightly painted arch installed on the sidewalk in front of Baker Library on a cloudy morning in early March. A student had constructed the eight-foot-tall sculpture for her final project after Beale challenged his class to produce what he calls “interventions,” works of art designed to transform public space in a creative way. “I’ve tried to teach my students the importance of stepping outside one’s comfort zone and taking risks,” he says. “That’s been a lifelong lesson for me.”

Beale was first challenged to step outside his own artistic comfort zone as an undergrad, when professor Brenda Garand encouraged the budding painter to further his interest in sculpture. He developed a passion, born partly out of economic necessity, for using found and reclaimed materials such as wood, shells and moss to create large-scale organic shapes. (View a slideshow of Beale’s work here.) In 2008 Beale founded Honey Space, a noncommercial artist-run gallery in Manhattan’s Chelsea neighborhood. Beale considers the venue, described by The New York Times as “one of the city’s strangest art establishments,” among his greatest works. “It was almost like a theater, where I would lift up the curtains and people would enter from the street,” he says. “It was a way to celebrate the idea of art as communication, as experience, and not just as a commodity.”

Since he shuttered Honey Space in 2012, Beale has created installations in Kiev, Moscow and Tasmania. He’s preparing to start his next body of creative work at a new studio in the Red Hook neighborhood of Brooklyn. The space is currently without heat or running water, and Beale plans to do all the renovations himself. “One of the secrets to being an artist,” he says, “is to keep the expenses low.”