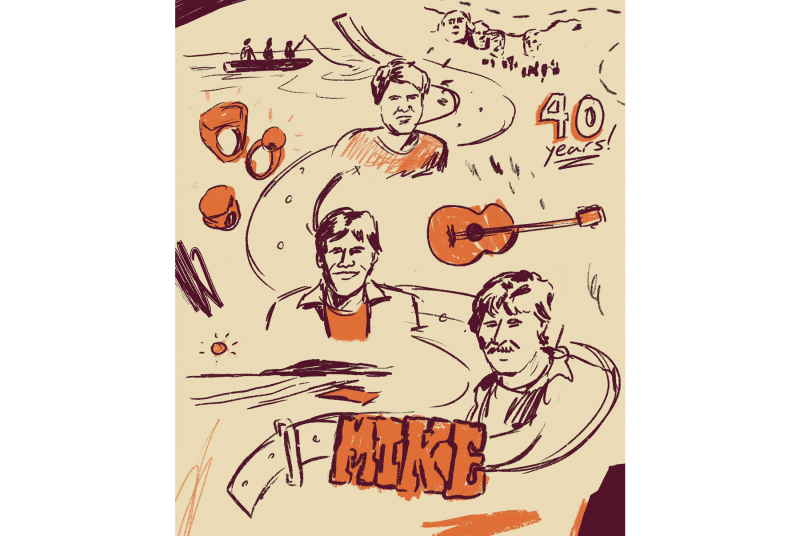 One for All, All for One

Our hitch in Hanover came during the height of the Vietnam War, which seemed to intensify the College experience, already fraught with the typical raging hormones, soul searching, and wondering what to do for the rest of your life. Dartmouth has always been an incubator of strong friendships, and good friends helped buffer those heady concerns. What can be harder is to make those friendships last.

We met as undergraduates (Rob and I played hockey together, Steve and Rob were fraternity brothers in the “Boom Boom Lodge”) and reconvened on a lark in Carmel, California, in August 1979. We rattled around and reminisced for two nights, then woke up a little groggy that Sunday, determined to do it again, every year, somewhere, for the rest of our lives. We knew we needed a name. Wandering around Carmel, I looked in the window of a leather shop and spotted a bronze belt buckle with the letters “MIKE.”

I started laughing, waved the others over and pointed out the belt buckle. That was it. Great minds agreed: We would call ourselves Mike (the “International” was added later), and the belt would become the titular ornament for Mike’s president. On the spot we decided the group’s three officers would be grand marshal, president, and secretary/treasurer, with the titles to rotate every year at the annual president’s dinner. We also bought five gaudy rings for the grand marshal, a mirrored ball on a chain for the secretary/treasurer, and a leather-bound book in which we fashioned a constitution setting forth the three branches of the friendship, the annual job rotation, and the job descriptions.

For 40 years, without fail, we have met. We have spanned six Dartmouth presidents and seven American presidents. For 40 years we have taken a group portrait. For 40 years the secretary/treasurer has recorded what we did and read that account at the president’s dinner the following year. Through time, rules have been modified. Like our country’s Constitution, our founding document became a living, breathing framework, rather than an ironclad mandate. On occasion an originalist voice will pipe up, and we will agree to do something as explicitly stipulated in 1979. Most of the time it’s a benign reminder of our
beginnings—and the passage of time.

We have discussed whether the remaining two should continue when one of us can’t (death, disfigurement, dismay). So far we have yet to amend our rules and regulations to establish an orderly endpoint. What we know is that this is a friendship we all treasure.

A Few Words from Rob
Most friends get together to play golf, ski, fish, or maybe take a bike ride. Not the Mikesters. We convene once a year to talk, laugh, place small wagers, and share feelings and truths about our lives. There’s no pretense, no bullshit, and very little planning involved.

Each year there is lots of catching up—some successes, some disappointments, health concerns, life lessons, and plenty of storytelling. We are three old friends staying abreast of each other’s lives by religiously meeting once a year. One of the best parts is how little we have changed through the years. We have remained refreshingly honest, genuinely interested in one another, and always ready with some heartfelt advice.

I moved from New York to the Bay Area 40 years ago, leaving most of my family and friends on the East Coast. I have golf and business buddies on the West Coast, but not close friends I can completely open up to. Because we go back 50 years, we keep each other grounded.

This past year one of our topics was dying and what comes after death. With three completely different perspectives, the Mikesters wrestled with that question at the president’s dinner. Then we made a few toasts, exchanged titular ornaments, and started to plan where to go next time.

And a Few from Steve
Here’s the dry math of it: For 40 consecutive years the three of us have spent three or four days at a Mike International reunion somewhere on the planet. Let’s call it three and a half days. That means each of us has traveled long distances and paid lots of money to spend 140 days with one another.

Why? Well, for the pleasure in it. I’ll spare you the details because from time to time we have done things that we’re not particularly proud of; we cannot believe we actually did; or some combination of those two. Know this: There is nonsense and ridiculously hard laughing. Occasionally there is a rub the wrong way that leads to brief grumbling and a smack on the back of the head. But most of the time there is quiet glee. And always, somewhere near the end, there is the surprise of poignancy.

Our most recent reunion in Nashville, our 40th, was the first that brought a lump in my throat and tears to my eyes for the love of these two guys. Forty years ago we were three young men in the same wonder boat, setting out on our adult lives with a satchel full of big, unanswered questions. Life shook us up. Lots of what we thought would happen to us did not happen, and what did happen sometimes flung us high in the air and tumbling back to land.

Well, lucky us. For 40 years we have had one another to tell about our tumblings and our landings.

Denis Wraps It Up
That weekend in Carmel could have been just a rowdy get-together of old college pals, just a one-and-done. To our ongoing surprise, the seed we planted was a perennial that has continued to blossom for 40 years. Nowhere else in our lives do we have a photographic record of our time on earth measured as consistently on an annual basis—not birthdays, college reunions, or holidays.

It’s possible our time in Hanover at a turbulent time helped foster a fierce camaraderie that evolved naturally into a long-term friendship. It’s also possible we were just three saps who saw in each other an excuse to meet and commiserate annually, knowing that every three years we could be the exalted grand marshal, wear his magic rings and order the other two around (as stipulated in our founding document). We were three amigos before Steve Martin, Martin Short, and Chevy Chase made their movie and way before Gordon Sondland, Kurt Volker, and Rick Perry tried to dig up dirt on Joe Biden in Ukraine. In life there are things you have to do and things you want to do. And sometimes, if you’re lucky, they are the same thing. So it is with this friendship. Our kids view Mike as a unicorn, and we take that as an endorsement. We have casually discussed how and when our annual gatherings might end, but there is no mention of term limits in the book of Mike.

Mike International has yet to determine where and when it will convene this year. “We will definitely meet up,” says O’Neill. “There are no pandemic exceptions in the bylaws.”