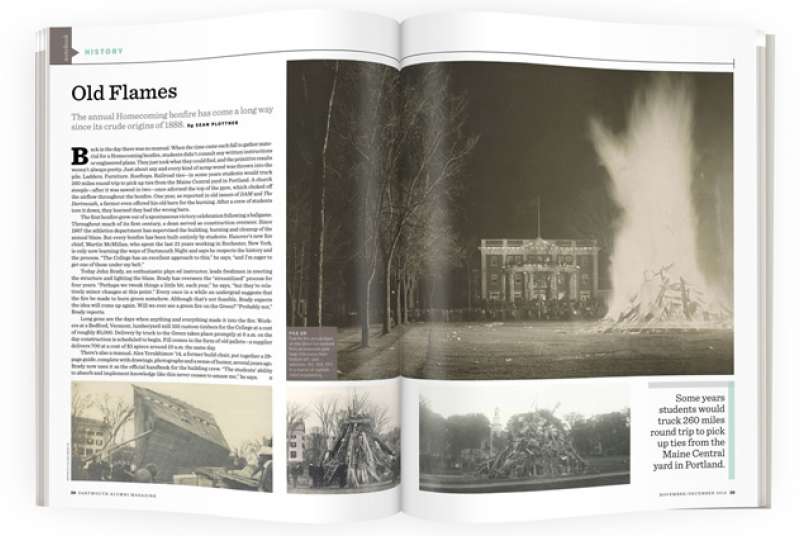 The annual Homecoming bonfire has come a long way since its crude origins in 1888.
Sean Plottner | Nov - Dec 2014

Back in the day there was no manual. When the time came each fall to gather material for a Homecoming bonfire, students didn’t consult any written instructions or engineered plans. They just took what they could find, and the primitive results weren’t always pretty. Just about any and every kind of scrap wood was thrown into the pile. Ladders. Furniture. Rooftops. Railroad ties. In some years students would truck 260 miles round trip to pick up ties from the Maine Central yard in Portland. A church steeple—after it was sawed in two—once adorned the top of the pyre, which choked off the airflow throughout the bonfire. One year, as reported in archival issues of DAM and The Dartmouth, a farmer even offered his old barn for the burning. After a crew of students tore it down, they learned they had the wrong barn.

The first bonfire grew out of a spontaneous victory celebration following a ballgame. Throughout much of its first century, a dean served as construction overseer. Since 1967 the athletics department has supervised the building, burning and cleanup of the annual blaze. But every bonfire has been built entirely by students. Hanover’s new fire chief, Martin McMillan, who spent the last 21 years working in Rochester, New York, is only now learning the ways of Dartmouth Night and says he respects the history and the process. “The College has an excellent approach to this,” he says, “and I’m eager to get one of these under my belt.”

Today John Brady, an enthusiastic phys ed instructor, leads freshmen in erecting the structure and lighting the blaze. Brady has overseen the “streamlined” process for
four years. “Perhaps we tweak things a little bit, each year,” he says, “but they’re rela-
tively minor changes at this point.” Every once in a while an undergrad suggests that the fire be made to burn green somehow. Although that’s not feasible, Brady expects the idea will come up again. Will we ever see a green fire on the Green? “Probably not,” Brady reports.

Long gone are the days when anything and everything made it into the fire. Now workers at a Vermont lumberyard mill 192 custom timbers for the College at a cost of roughly $5,000. Delivery by truck to the Green takes place promptly at 6 a.m. on the day construction is scheduled to begin. Fill comes in the form of old pallets—a supplier delivers 700 at a cost of $3 apiece around 10 a.m. the same day.

There’s also a manual. Alex Yerukhimov ’14, a former build chair, put together a 29-page guide, complete with drawings, photographs and a sense of humor, several years ago. Brady now uses it as the official handbook for the building crew. “The students’ ability to absorb and implement knowledge like this never ceases to amaze me,” he says.