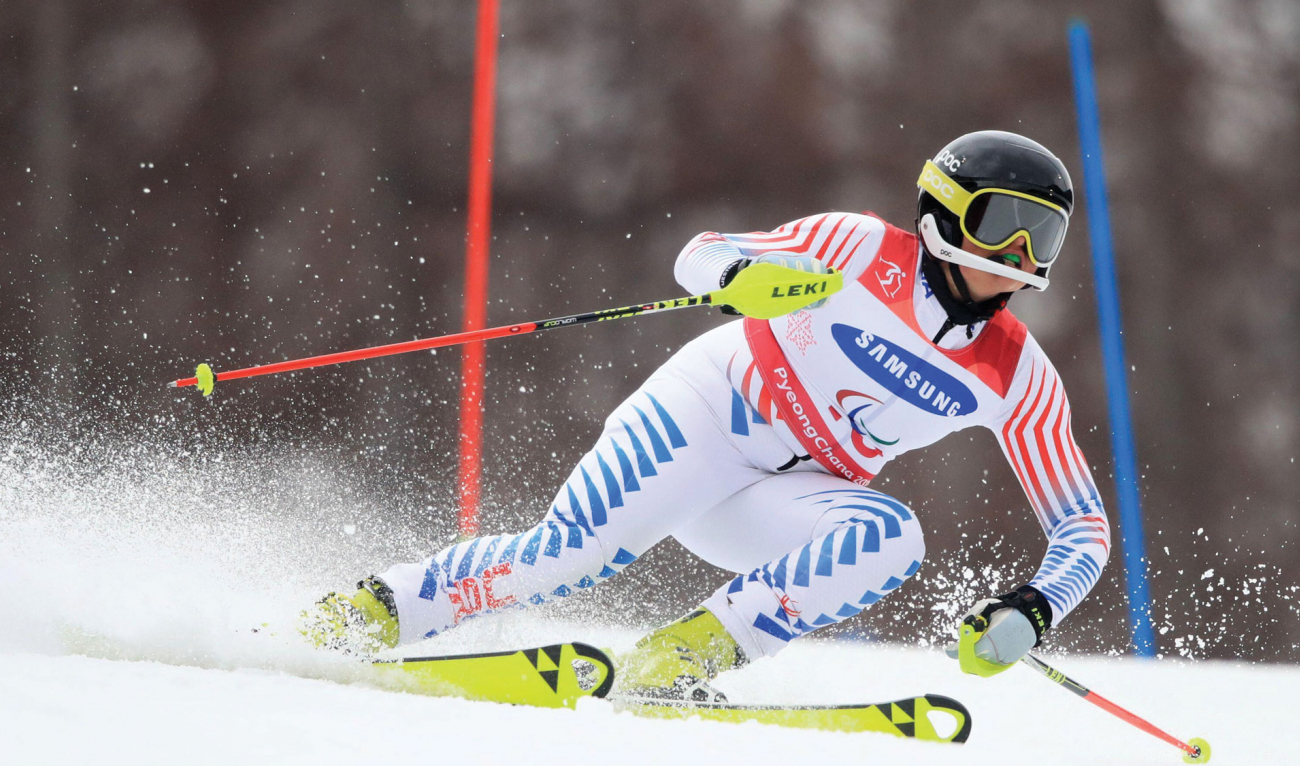 Staci Mannella (above) is the latest Big Green Paralympian to find success on the slopes. (Photo by Donald Miralle/Getty Images)
Features

Following World War II, injured veterans in alpine nations created adaptive gear so they could return to the slopes they loved, and para-alpine skiing was born. Athletes from a ski school such as Dartmouth naturally took to the challenge of skiing competitively with a physical disability. The College’s illustrious history in Paralympic skiing features eight alpine and Nordic skiers through the past three decades. Together, Martha Hill Gaskill ’82, Diana Golden Brosnihan ’84, brothers Joseph Walsh ’84 and Robert Walsh ’88, Sarah Billmeier ’99, Ramona Hoh ’02, Carl Burnett ’03, and Staci Mannella ’18 have taken home enough precious metal in Olympics, world championships, and tour competitions to open a regional bank.

Golden Brosnihan led the charge. After losing her right leg to bone cancer at age 12, she went on to win 10 world championships and 19 national championships. She was a dominating, take-no-prisoners competitor. At the 1988 Winter Olympics in Calgary, Canada, where women’s Paralympic skiing debuted as a demonstration event, Golden Brosnihan won the gold medal, and Hill Gaskill, who’d also lost a leg to cancer, took the bronze in the giant slalom. In 1997, Golden Brosnihan was inducted into the U.S. National Ski Hall of Fame. She died in 2001.

Mannella was born with a rare genetic eye condition and is legally blind. She began skiing at 4 and is a two-time Paralympian who won the first World Cup event she entered. In competitions, a visually impaired skier follows a sighted guide, and the duo communicate via Bluetooth headsets. “My guide tells me things that are coming up—like changes in the snow conditions, the rhythm of the course or the terrain—that I probably wouldn’t be able to pick up on my own. It takes a long time to work out the timing and spacing to be sure you are in sync,” she explains.

Billmeier, who lost a leg to bone cancer at age 5, was a notorious speedster who excelled in the downhill, where she regularly topped 60 mph. “It’s about harnessing your fear and being aggressive in this situation, which is normally pretty scary,” she says. “There’s a fine line of pushing boundaries. If you crash, there are consequences, but if you don’t push it, then you lose.” Now a surgeon at Dartmouth Hitchcock Medical Center, Billmeier won 13 medals—seven of them golds—across four Paralympic Games. Prior to the 1994 Games, Billmeier broke her leg—twice. The second break required the insertion of a plate, which allowed her to train in time for Lillehammer, Norway.

“It was really hard coming back, and I remember the first time doing downhill training after the accident,” Billmeier recalls. “We were on this course, and I just couldn’t do it. We had a really awesome start coach, and we talked about it, and I got over that hump.” Billmeier went on to win gold medals in both the downhill and the giant slalom. “That was one of the things I was most proud of, because of the mental challenge.”

Overcoming such obstacles is typical of Dartmouth’s Paralympians and their competitive spirit. As Golden Brosnihan once said, “Athletes don’t want to be courageous. They want to be good.”

Chris Quirk is a freelance writer. He wrote about Ann Kapusta ’07 in the July/August issue of DAM.