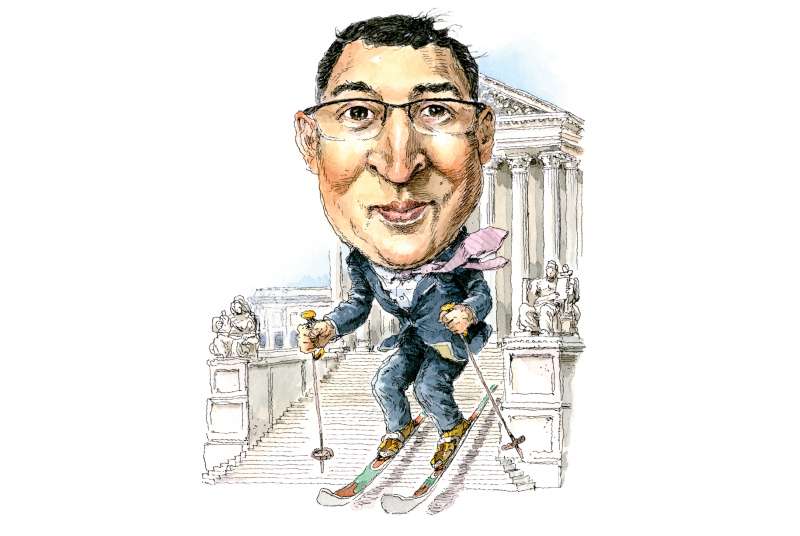 A litigator on arguing before the U.S. Supreme Court
Lisa Furlong | May - Jun 2018

“I’m not sure my parents have yet decided it was a good idea I became a lawyer. They cried when I decided to go to Dartmouth instead of pursuing a six-year undergraduate-and-medical-degree program.”

“When my mom and dad visited the Supreme Court when I was clerking for Justice Stephen Breyer, my mom said, ‘Maybe you did okay.’ It wasn’t until I married a doctor that she decided I really did okay.”

“Dartmouth debate coach Ken Strange was the most important teacher of my life. Before every Supreme Court argument, I think of the lessons he taught me.”

“I’m a reasonably good lawyer, but I’m far better at aggregating a team of really talented people and harnessing their insights, which is much more the Dartmouth way than at other colleges.”

“When I went to law school, having traveled with debate teams, it was the first time I was at school five days a week since my freshman year of high school. School is a lot easier when you go to all the classes.”

“Everyone in my class at Yale Law School had worked their tails off to get in, and many were trying to have the social lives they had missed. I’d had a robust social life, as one does at Dartmouth, so I was ready to hit the books.”

“To those considering law school, the current president is making a case for the need for lawyers.”

“I’m an American exceptionalist. The United States is the best country on earth largely because our system is based on the rule of law, and we have people who are willing to stand up and fight for it.”

“The Supreme Court justices know me well enough to know I’m going to come before them and make only my best points, and I’m not going to take liberties with the law because I’ll be back there arguing another case in a month.”

“Arguing a case before the Supreme Court is about facilitating a conversation among the justices.”

“Before every Supreme Court argument, I talk to each of my kids about it, and they ask questions. Now they are old enough to truly understand the cases, but when they were 5, 7 and 9, forcing myself to explain one to them was a way to confirm I’d gotten to the heart of the issue.”

“I still get nervous before every Supreme Court case. As I pass in front of the court, it sometimes brings me to tears to see the inscription, ‘Equal Justice Under Law.’ One of the first things I see inside the building is a statue of Chief Justice John Marshall, and there’s a spot on his foot I always rub.”

“I am someone who believes in ritual. I wear the exact same thing to the court every time: my dad’s Sikh kara bracelet, socks my mom gave me, a tie my aunt gave me and a suit I bought a while ago.”

“I never think about being on the Supreme Court. You don’t take cases such as defending bin Laden’s driver with that career path in mind.”

“If I weren’t a lawyer and didn’t have to worry about supporting my family? I’d be a ski instructor.”