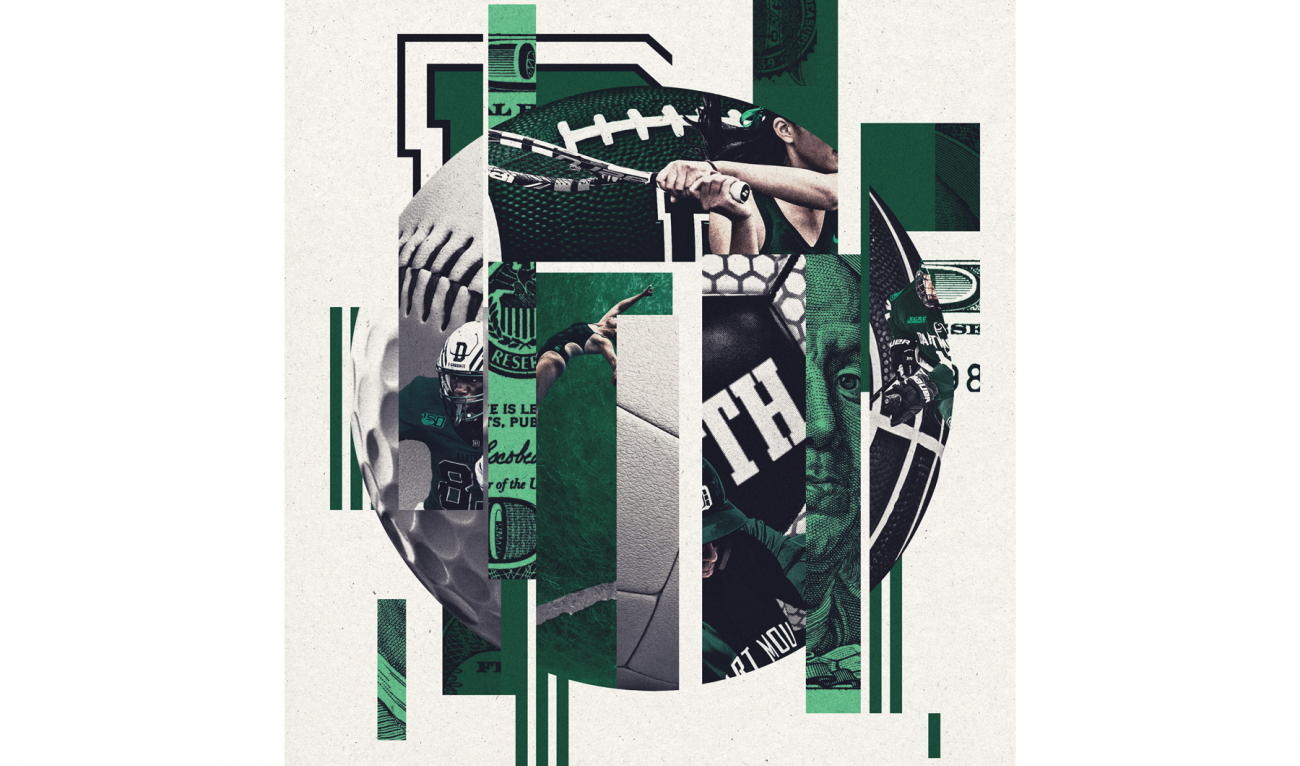 With the changes to NCAA endorsement rules, will student-athletes cash in?
Jim Collins ’84 | November-December 2021

his past July, following the U.S. Supreme Court decision that NCAA restrictions on “education-related benefits” violate antitrust laws, the NCAA adopted a new policy that allows incoming and current student-athletes to profit from the use of their “name, image, and likeness” (NIL). A day after the policy change, Ole Miss quarterback Matt Corral began advertising his speaking and appearance fee—through Dreamfield, a startup collegiate athlete booking agency—of $10,000 per hour. Within weeks University of Alabama quarterback Bryce Young, a 19-year-old sophomore who threw all of 22 passes last year as a backup, had signed endorsement deals totaling close to $1 million. Fresno State’s twin basketball players, Haley and Hanna Cavinder, were on their way to parlaying their massive social media presence into a projected six-figure income.

In response to the NCAA’s move, the Ivy League quickly adjusted its own policy to allow student-athletes at Dartmouth and the other Ivies to engage in NIL activities. “It’s a new world,” says Chelsea Goss, Dartmouth associate athletic director for compliance. “We’re just trying to start out doing things correctly.”

The rule change had been in the works for some time. While online monetizing platforms, big-time sports agencies, and corporate marketing departments all geared up in anticipation, interim athletics director Peter Roby ’79 was regularly meeting with other conference ADs and representatives from the Ivy League. A few days after the rule change went into effect, Roby told the Concord Monitor that Dartmouth would follow the Ivy guidelines as well as Dartmouth’s own rules and restrictions on intellectual property, trademarks, and product promotion. “It’s all kind of fluid right now,” he said. “It is a work in progress.”

Just how new the world will be at Dartmouth remains to be seen. Athletes here lack the celebrity platform and ESPN cachet of the Big Ten or Southeastern Conference. Football players Ben Keeter ’22 and Griff Lehman ’22 were two of the first Dartmouth students to test the waters, signing on as “Barstool Athletes,” essentially agreeing to associate their Twitter feeds with the irreverent sports and pop culture blog, Barstool Sports, in exchange for free merch such as sweatpants and hoodies. Each of them has fewer than a thousand Instagram followers. (The Cavinder twins, by comparison, have about 600,000 Instagram followers and 3.6 million followers on TikTok.) Linebacker Macklin Ayers ’24 signed a modest contract endorsing the gym where he worked out back in central Pennsylvania. “I got a few T-shirts,” he says, “but mostly I wanted to promote the work of my trainer there.”

According to Goss, that type of small-scale, local-pride endorsement is typical, so far, of the deals that the compliance office is helping student-athletes navigate. The two-person staff has put together Q&A and guideline documents intended to clarify what is and isn’t allowed under the College’s name, image, and likeness policy. For instance, students aren’t allowed to incorporate Dartmouth logos, appear wearing Dartmouth uniforms, or be filmed or photographed using College athletics facilities. Alpine ski team member Hanna Utter ’21 had to turn down endorsement offers from a craft brewery and a pot shop in her home state of Vermont because of College prohibitions against promoting the sale or use of alcohol or cannabinoid products. (Other categories on that list include firearms, tobacco, and pornography.)

“We’re here to support our student-athletes and make sure they remain eligible to compete on their teams,” Goss says, “and to understand that any agreements they sign may affect their financial aid packages—or impact their visa status if they’re international students. We’re not allowed to advise them on how to profit from the new rules. We tell them to talk with their parents. Get a lawyer. Get an agent.”

A former Junior Olympic skier, Goss joined the athletics department last January after stints at Eastern Washington University, University of Minnesota, and University of Vermont. “I started getting to know athletes here, and I was like ‘Wow,’ ” she says. “These aren’t typical athletes. They’re well-rounded. They’re focused on academics, they’re premed, they’re running family companies, they’re entrepreneurs, they’re savvy. I hate to say they’re not like football players in the SEC—but they aren’t. They’ll figure out different ways to take advantage of this.” She wonders how the new rules will affect Olympic-level athletes who play sports in which Dartmouth has a nationally recognized name—such as rugby, rowing, and squash.

Not long after the NCAA announced the policy change, Jonathan Jensen, an assistant professor of sport administration at University of North Carolina who spent a dozen years crafting sponsorship deals for professional athletes, told USA Today that college athletes at certain small-market schools or playing selected nontelevised sports may stand to profit. “If you’re a two-time national female lacrosse player of the year,” he said, “you may have higher earning potential because you’ve excelled on the field and the following for lacrosse is a big market sport on the East Coast and you can reach a consumer that has a great deal of disposable income.”

Forget selling autographs. What kinds of opportunities might emerge from boutique businesses owned by Dartmouth alumni or from partnerships with luxury brands such as Rolex, J. Crew, Ralph Lauren, Land Rover, Goldman Sachs?

“I would think there’s some potential there,” Goss says.

Jim Collins wrote about Bianca Smith ’12 in the September/October 2021 issue of DAM.