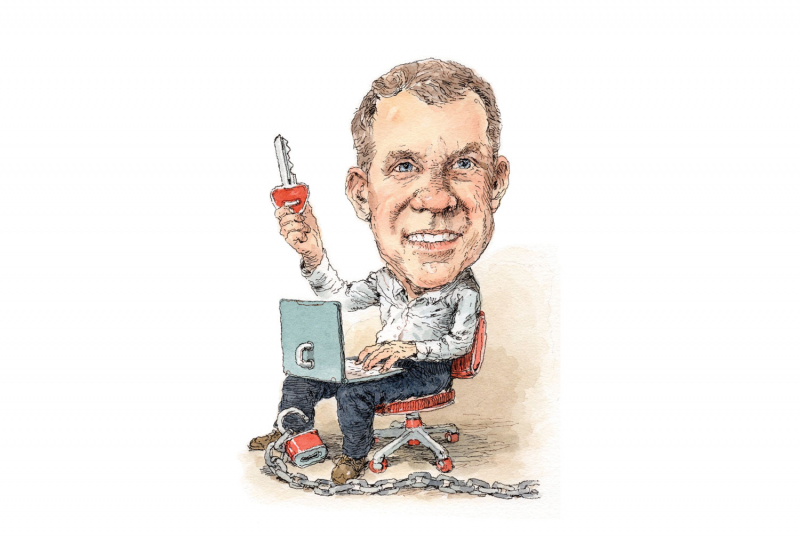 Notable: Unanimously confirmed by U.S. Senate in September as ambassador-at-large for cybersecurity and digital policy; Dartmouth trustee, 2012-20; Marine in Afghanistan and Iraq, 2000-04; author of One Bullet Away (2005); member, national cycling championship team, 1999

“I was sworn into my new job—as ambassador-at-large for cybersecurity and digital policy—at a UPS store in South Portland, Maine, by a notary public, with a bunch of people behind me waiting to send their packages. It reminded me of the Hemingway character who, when asked how he went broke, replied, ‘Gradually, then all of a sudden.’ The process of my nomination took months. Then I was confirmed on Wednesday, sworn in Thursday so I could get a diplomatic passport on Friday, and flew to a conference in Romania Saturday.”

“Interagency work will test my diplomatic mettle as much as anything overseas, but there are good people at the White House, Department of Defense, CIA, Department of Homeland Security whom I’ve known for more than a decade. There is a certain baseline of trust right away.”

“I believe in the intrinsic value of diplomacy. This goes back to my time in the Marines after 9/11 serving in combat in ways that spoke to failures of diplomacy, not at the working diplomat level, but at senior policymaker levels.”

“Technology is not vertical. It’s a substrate that cuts across every aspect of our foreign policy. The Biden State Department is trying to amplify the importance of technology and cybersecurity across government. It isn’t just about countering Russia or countering China. It’s about the good technology can do.”

“I’ve been amazed to see the hunger for cybersecurity capacity building around the world. People know this is a big part of their future—not just email, not just digital payments. It’s the digital transformation of how we engage with our economies, with our healthcare systems. It’s smart cities and the proverbial internet of things. Countries know their populations run the risk of being left behind.”

“The reality in every organization is that when it comes to security, the members of your organization are your first line of defense—but also your greatest weakness. Not maliciously, but unwittingly. We need to improve people’s cyber awareness, hygiene, and capability.”

“Hacktivism on its own is neither good nor bad. It depends upon the end at which it’s directed. I worked for years with incredibly talented software developers who proudly consider themselves hackers. There are organizations such as Hackers for Charity and Hacking for Defense that use the capability of white-hat hacker teams to discover vulnerabilities in government systems, then disclose them, so they can be closed.”

“There are regimes around the world, North Korea prominent among them, that are certainly making use of cryptocurrency in combination with ransomware to fund all kinds of illicit activity.”

“There’s sort of a running joke among cybersecurity people that the more digital your work life, the more analog your personal life. When my wife and I built a house about six years ago, the contractor said, ‘I haven’t built a house this analog in 20 years.’ I said, ‘Let me tell you what I do for a living.’ ”

“I had the good fortune of working for a general who said, ‘Fight with a happy heart.’ I go through the turnstile at the State Department every morning with a big grin on my face. It’s a huge privilege to have tough conversations with partners and adversaries around the world.”