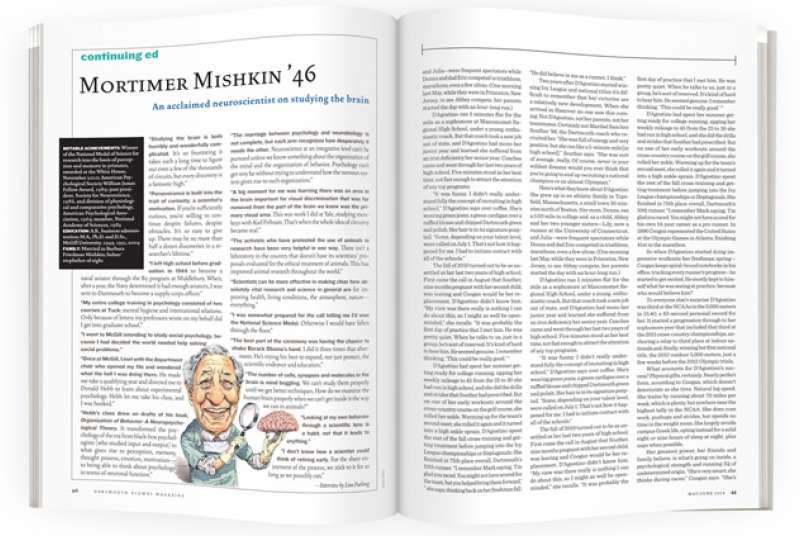 An acclaimed neuroscientist on studying the brain.
Interview by Lisa Furlong | Jul - Aug 2011

“Studying the brain is both horribly and wonderfully complicated. It’s so frustrating it takes such a long time to figure out even a few of the thousands of circuits, but every discovery is a fantastic high.”

“Perseverance is built into the trait of curiosity, a scientist’s motivation. If you’re sufficiently curious, you’re willing to continue despite failures, despite obstacles. It’s so easy to give up. There may be no more than half a dozen discoveries in a researcher’s lifetime.”

“I left high school before graduation in 1944 to become a naval aviator through the B5 program at Middlebury. When, after a year, the Navy determined it had enough aviators, I was sent to Dartmouth to become a supply corps officer.”

“My entire college training in psychology consisted of two courses at Tuck: mental hygiene and international relations. Only because of letters my professors wrote on my behalf did I get into graduate school.”

“I went to McGill intending to study social psychology, because I had decided the world needed help solving social problems.”

“Once at McGill, I met with the department chair who opened my file and wondered what the hell I was doing there. He made me take a qualifying year and directed me to Donald Hebb to learn about experimental psychology. Hebb let me take his class, and I was hooked.”

“Hebb’s class drew on drafts of his book, Organization of Behavior: A Neuropsychological Theory. It transformed the psychology of the era from black-box psychologists [who studied input and output] to what gives rise to perception, memory, thought process, emotion, motivation—to being able to think about psychology in terms of neuronal function.”

“The marriage between psychology and neurobiology is not complete, but each arm recognizes how desperately it needs the other. Neuroscience at an integrative level can’t be pursued unless we know something about the organization of the mind and the organization of behavior. Psychology can’t get very far without trying to understand how the nervous system gives rise to such organization.”

“A big moment for me was learning there was an area in the brain important for visual discrimination that was far removed from the part of the brain we knew was the primary visual area. This was work I did at Yale, studying monkeys with Karl Pribram. That’s when the whole idea of circuitry became real.”

“The activists who have protested the use of animals in research have been very helpful in one way. There isn’t a laboratory in the country that doesn’t have its scientists’ proposals evaluated for the ethical treatment of animals. This has improved animal research throughout the world.”

“Scientists can be more effective in making clear how absolutely vital research and science in general are for improving health, living conditions, the atmosphere, nature—everything.”

“I was somewhat prepared for the call telling me I’d won the National Science Medal. Otherwise I would have fallen through the floor.”

“The best part of the ceremony was having the chance to shake Barack Obama’s hand. I did it three times that afternoon. He’s trying his best to expand, not just protect, the scientific endeavor and education.”

“The number of cells, synapses and molecules in the brain is mind boggling. We can’t study them properly until we get better techniques. How do we examine the human brain properly when we can’t get inside it the way we can in animals?”

“Looking at my own behavior through a scientific lens is a habit, not that it leads to anything.”

“I don’t know how a scientist could think of retiring early. For the sheer enjoyment of the process, we stick to it for as long as we possibly can.”