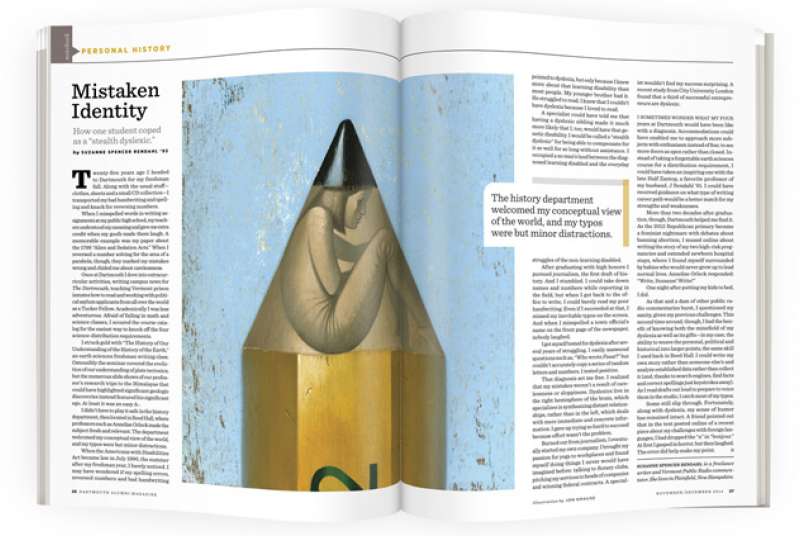 Twenty-five years ago I headed to Dartmouth for my freshman fall. Along with the usual stuff—clothes, sheets and a small CD collection—I transported my bad handwriting and spelling and knack for reversing numbers.

When I misspelled words in writing assignments at my public high school, my teachers understood my meaning and gave me extra credit when my goofs made them laugh. A memorable example was my paper about the 1798 “Alien and Sedation Acts.” When I reversed a number solving for the area under a parabola, though, they marked my mistakes wrong and chided me about carelessness.

Once at Dartmouth I dove into extracurricular activities, writing campus news for The Dartmouth, teaching Vermont prison inmates how to read and working with political asylum applicants from all over the world as a Tucker Fellow. Academically I was less adventurous. Afraid of failing in math and science classes, I scoured the course catalog for the easiest way to knock off the four science-distribution requirements.

I struck gold with “The History of Our Understanding of the History of the Earth,” an earth sciences freshman writing class. Ostensibly the seminar covered the evolution of our understanding of plate tectonics, but the numerous slide shows of our professor’s research trips to the Himalayas that could have highlighted significant geologic discoveries instead featured his significant ego. At least it was an easy A-.

I didn’t have to play it safe in the history department, then located in Reed Hall, where professors such as Annelise Orleck made the subject fresh and relevant. The department welcomed my conceptual view of the world, and my typos were but minor distractions.

When the Americans with Disabilities Act became law in July 1990, the summer after my freshman year, I barely noticed. I may have wondered if my spelling errors, reversed numbers and bad handwriting pointed to dyslexia, but only because I knew more about that learning disability than most people. My younger brother had it. He struggled to read. I knew that I couldn’t have dyslexia because I loved to read.

A specialist could have told me that having a dyslexic sibling made it much more likely that I, too, would have that genetic disability. I would be called a “stealth dyslexic” for being able to compensate for it so well for so long without assistance. I occupied a no man’s land between the diagnosed learning disabled and the everyday struggles of the non-learning disabled.

After graduating with high honors I pursued journalism, the first draft of history. And I stumbled. I could take down names and numbers while reporting in the field, but when I got back to the office to write, I could barely read my poor handwriting. Even if I succeeded at that, I missed my inevitable typos on the screen. And when I misspelled a town official’s name on the front page of the newspaper, nobody laughed.

I got myself tested for dyslexia after several years of struggling. I easily answered questions such as, “Who wrote Faust?” but couldn’t accurately copy a series of random letters and numbers. I tested positive.

That diagnosis set me free. I realized that my mistakes weren’t a result of carelessness or sloppiness. Dyslexics live in the right hemisphere of the brain, which specializes in synthesizing distant relationships, rather than in the left, which deals with more immediate and concrete information. I gave up trying so hard to succeed because effort wasn’t the problem.

Burned out from journalism, I eventually started my own company. I brought my passion for yoga to workplaces and found myself doing things I never would have imagined before: talking to Rotary clubs, pitching my services to heads of companies and winning federal contracts. A specialist wouldn’t find my success surprising. A recent study from City University London found that a third of successful entrepreneurs are dyslexic.

I sometimes wonder what my four years at Dartmouth would have been like with a diagnosis. Accommodations could have enabled me to approach more subjects with enthusiasm instead of fear, to see more doors as open rather than closed. Instead of taking a forgettable earth sciences course for a distribution requirement, I could have taken an inspiring one with the late Half Zantop, a favorite professor of my husband, J Rendahl ’91. I could have received guidance on what type of writing career path would be a better match for my strengths and weaknesses.

More than two decades after graduation, though, Dartmouth helped me find it. As the 2012 Republican primary became a feminist nightmare with debates about banning abortion, I mused online about writing the story of my two high-risk pregnancies and extended newborn hospital stays, where I found myself surrounded by babies who would never grow up to lead normal lives. Annelise Orleck responded: “Write, Suzanne! Write!”

One night after putting my kids to bed, I did.

As that and a dam of other public radio commentaries burst, I questioned my sanity, given my previous challenges. This second time around, though, I had the benefit of knowing both the minefield of my dyslexia as well as its gifts—in my case, the ability to weave the personal, political and historical into larger points, the same skill I used back in Reed Hall. I could write my own story rather than someone else’s and analyze established data rather than collect it (and, thanks to search engines, find facts and correct spellings just keystrokes away). As I read drafts out loud to prepare to voice them in the studio, I catch most of my typos.

Some still slip through. Fortunately, along with dyslexia, my sense of humor has remained intact. A friend pointed out that in the text posted online of a recent piece about my challenges with foreign languages, I had dropped the “n” in “bonjour.” At first I gasped in horror, but then laughed. The error did help make my point.