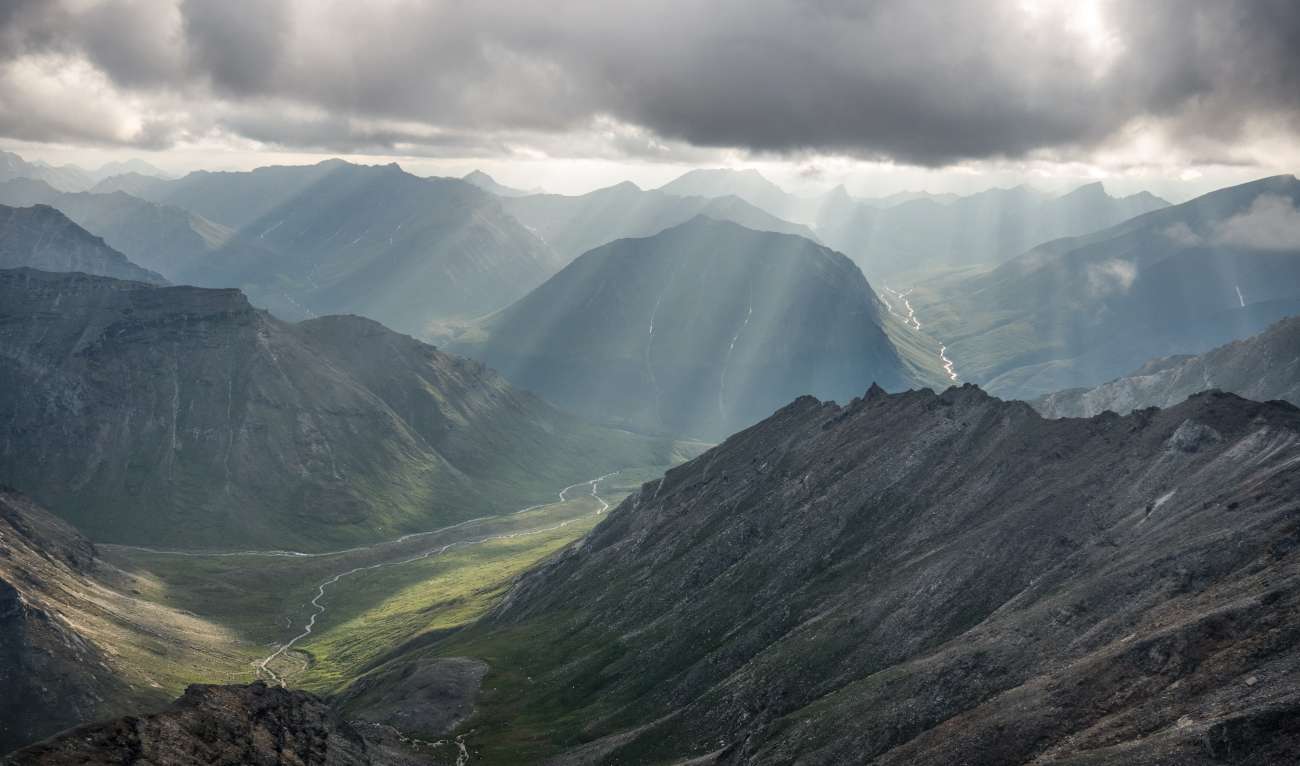 At twilight, the sun washes El Capitan’s broad face in oranges, pinks, and yellows. From the ground, climbers nearing its 3,000-foot summit look like ants. Chris Vale ’18 and his climbing partner had spent September 5, 2016, on that big wall in Yosemite, a rite of passage among climbers. As the sun died, they topped out, and as the moon rose, they descended. To show the way down, they clicked on their headlamps.

Vale was moving faster than his partner. One hundred feet below him, Vale yelled, “Off rappel!” indicating he was fastening himself to another rope a climber had left behind. Eight seconds later, his partner heard a crash. He saw the light from Vale’s headlamp fade on the valley floor. The rope hadn’t held, and Vale, a 21-year-old engineering sciences major from Tiburon, California, was dead.

Eight hundred miles away in Wyoming’s Wind River mountains, Vale’s friend and fellow climber David Bain ’17 was hiking out after a multi-day trek. He was telling his companions about Chris’s expedition up El Cap. “I got a text from a friend,” he recalls. “It said, ‘Call me. Something bad happened to Chris.’ ”

Before the pair had met on campus, word about Vale and his adventures spread throughout the Dartmouth climbing community. Prior to college, Vale had taken a gap year to teach Tibetan refugees in India and trek the Himalayas. Then he worked in a lab in Santiago, Chile, and backpacked in Patagonia. “I heard a story about how he traveled in India for a month eating just rice and living on two dollars a week,” Bain says. “I thought it was bull, but then I saw a picture of him there, and I thought, ‘Wow. I guess that was real.’ ”

Fear tempered their awe. “If you think climbers don’t get scared, you’re wrong.”

A member of Dartmouth’s Mountaineering Club, Vale loved leading trips for beginners as much as he did tackling gnarly routes with veterans. “He’s one of the few larger-than-life people I ever met—a super-inspiring climber, fearless and driven,” Bain says. “Before Yosemite, he was in the gym every day getting ready. I was one of the stronger climbers there, and he was training every day and getting so strong. Seeing him there was a real kick in the butt.”

Vale was a very determined young man, according to his mother, Karen Dell. “This was mostly a good trait, although sometimes ‘determined’ turned into ‘stubborn,’ especially if you didn’t agree with him about something,” she says. She believes that more than anything else her son was determined to do something out of the ordinary with his life. “When he had to do an engineering project in high school, he didn’t just build a table,” she says. “He built a very specialized microscope. It was the same at Dartmouth.” 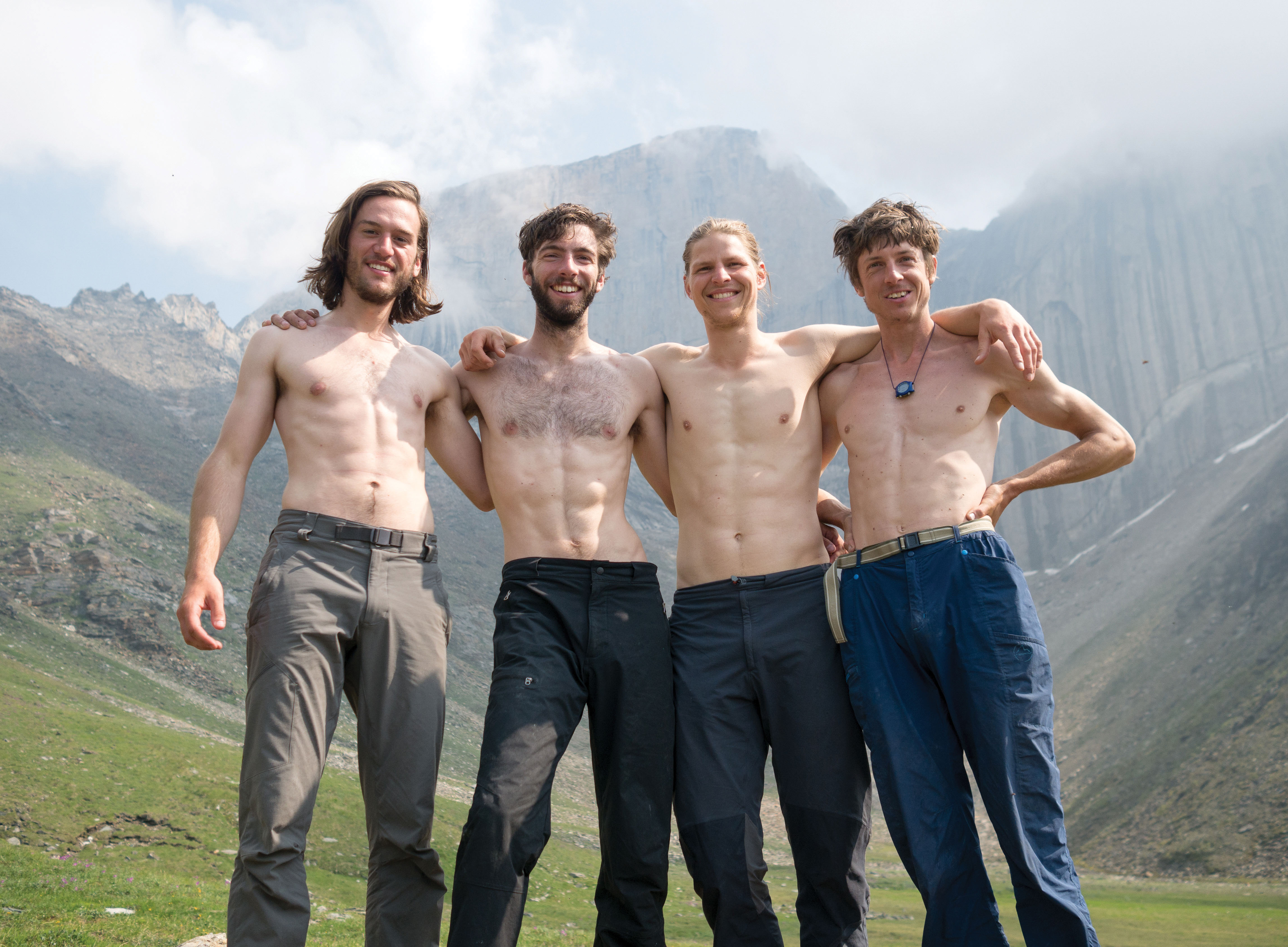 Vale and his climbing friends (above, from left) Gabe Boning ’18, Bain, Billy Braasch, Adv’18, and Zebediah Engberg, Adv’11, Adv’14, had daydreamed about mounting an expedition to some exotic summit. In the weeks after Vale’s accident, talk turned to action. They agreed they would celebrate his singular spirit by setting aim on the wildest, most ambitious objective—Mount Xanadu, the centerpiece of the Arrigetch mountain range in Gates of the Arctic National Park. “This region of northern Alaska sees only two to three expeditions a year,” Engberg says. “It’s a wild, remote location, far from civilization.”

“Desolate and sublime” is how Engberg and Braasch described Xanadu to the mountain climbing publication Alpinist.com. “Its ever-present mass, the aesthetic geometry of its walls, the sheer steepness of all of its facets give the peak a feeling of utmost prominence.”

The foursome planned to tackle Xanadu’s unclimbed 7,160-foot west face. Climber and author Jon Krakauer was a member of the first team to summit Xanadu in 1974 via a different route. “The first ascent of Xanadu was a big objective in one of the world’s great mountain ranges,” Engberg says. “Professional climbers had their eyes on it for years. It had been attempted before. Xanadu was probably the most important unclimbed wall in the Arrigetch.” 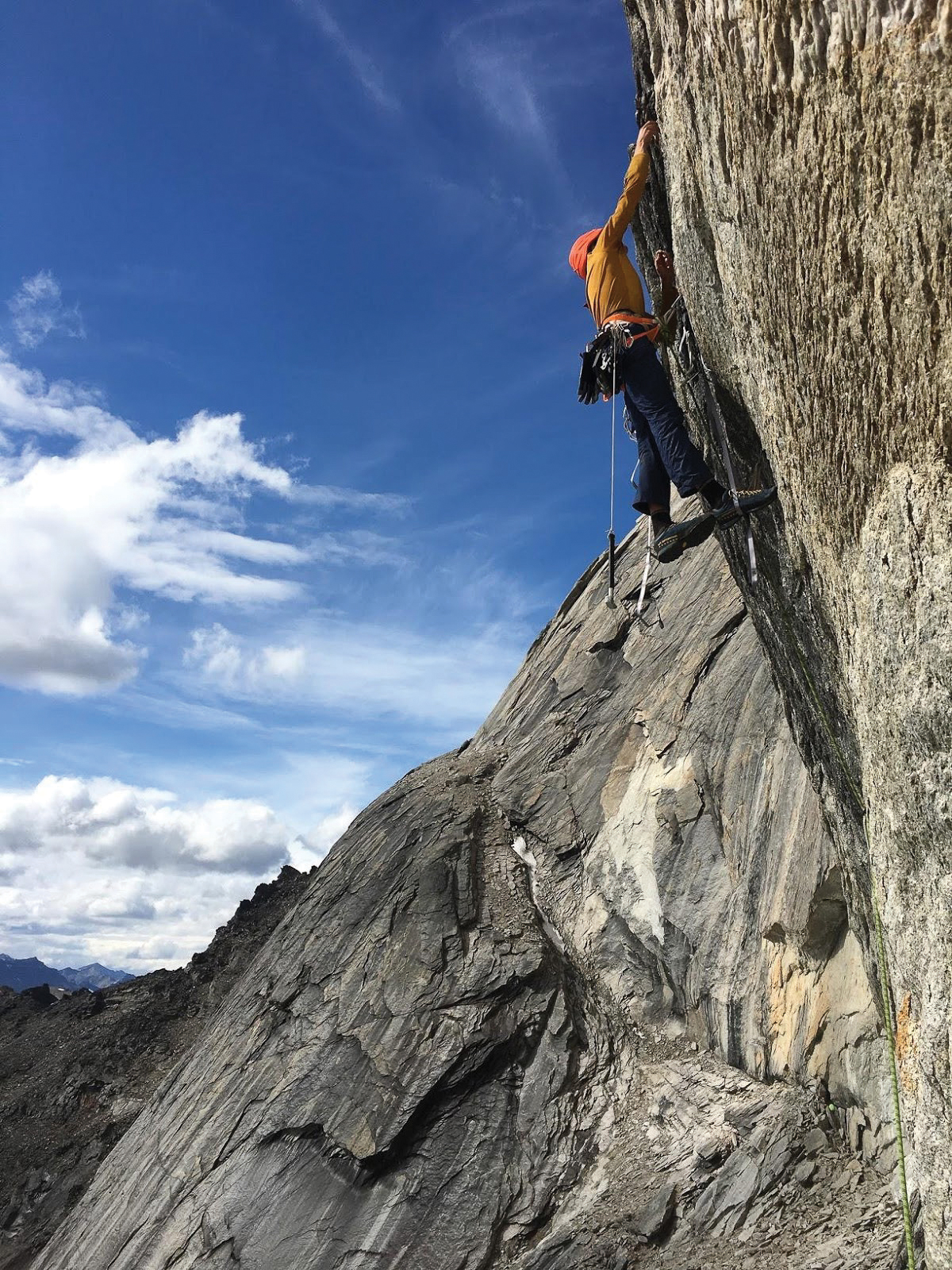 For Vale’s friends, it posed the biggest climbing challenge any of them had ever faced. They spent nine months detailing their plan of attack. Braasch built a spreadsheet to track the food and equipment they would need. They sought and received funding via grants from the American Alpine Club and the DOC’s Chris Vale Expedition Fund, whose charter says he “epitomized turning outdoor fantasies into realities through his adventurous spirit, passion, and drive.” It provides funding up to $5,000 for one major expedition-style trip per year to a single group of Dartmouth students.

Reaching Xanadu in July 2017 required three flights from Anchorage, Alaska, and a three-day backcountry hike. For their last flight, the foursome stuffed themselves into a single-engine plane out of Bettles, population 12. After making a pontoon plane landing on Circle Lake, sun glinting on its clear water, they trudged through dense marshes, maddened by buzzing, biting gnats before they slogged up the aptly named Escape Pass and arrived at Xanadu. Beneath the sheer face of the granite monolith, they set up base camp.

“It was as majestic as we’d hoped,” Bain says. “The face was striking, the rock a beautiful gold color—pristine. We had no idea if we could actually climb it, but I thought even if we’re not able to, this is the highest-quality rock we could have dreamt of.”

They went up cautiously in pairs, Engberg and Braasch going first, leaving fixed lines in the wall, while Boning and Bain stayed in camp and kept their eyes on the duo. The next day, they switched roles, pushing to greater heights.

“There are no guarantees putting up a first ascent,” Bain says. “We could have hit a dead end, or we could have gotten into bad rock, or rock could have fallen.”

“The climbing was phenomenal,” Braasch recalls. “We felt Chris would have done so well. We kept thinking, ‘Chris would sail up this.’ ”

Fear tempered their awe. “If you think climbers don’t get scared on big, exposed walls, you’re wrong,” Engberg says. “I’m definitely afraid of heights, despite climbing regularly for the past 18 years. It was scary up there.”

“There are times when you’re scared, and you know you should keep going, and there are times when you’re scared, and you know it’s the right decision to back off,” Bain explains. “The hard part is you never know where that line is. It’s a constant mental battle of ‘Does this feel scary because it’s super-dangerous, or does this feel scary because I’m a wimp and it’s cold?’ It’s hard to know until you cross that line, and sometimes you mess up. So many things in life are guaranteed to be safe, but in climbing, no one is saying something is a good idea or that it’s safe to be here. Climbing is one of the few times in my life where I have 100-percent responsibility for what happens to me. If I mess up, I can die, and it’s on me.” 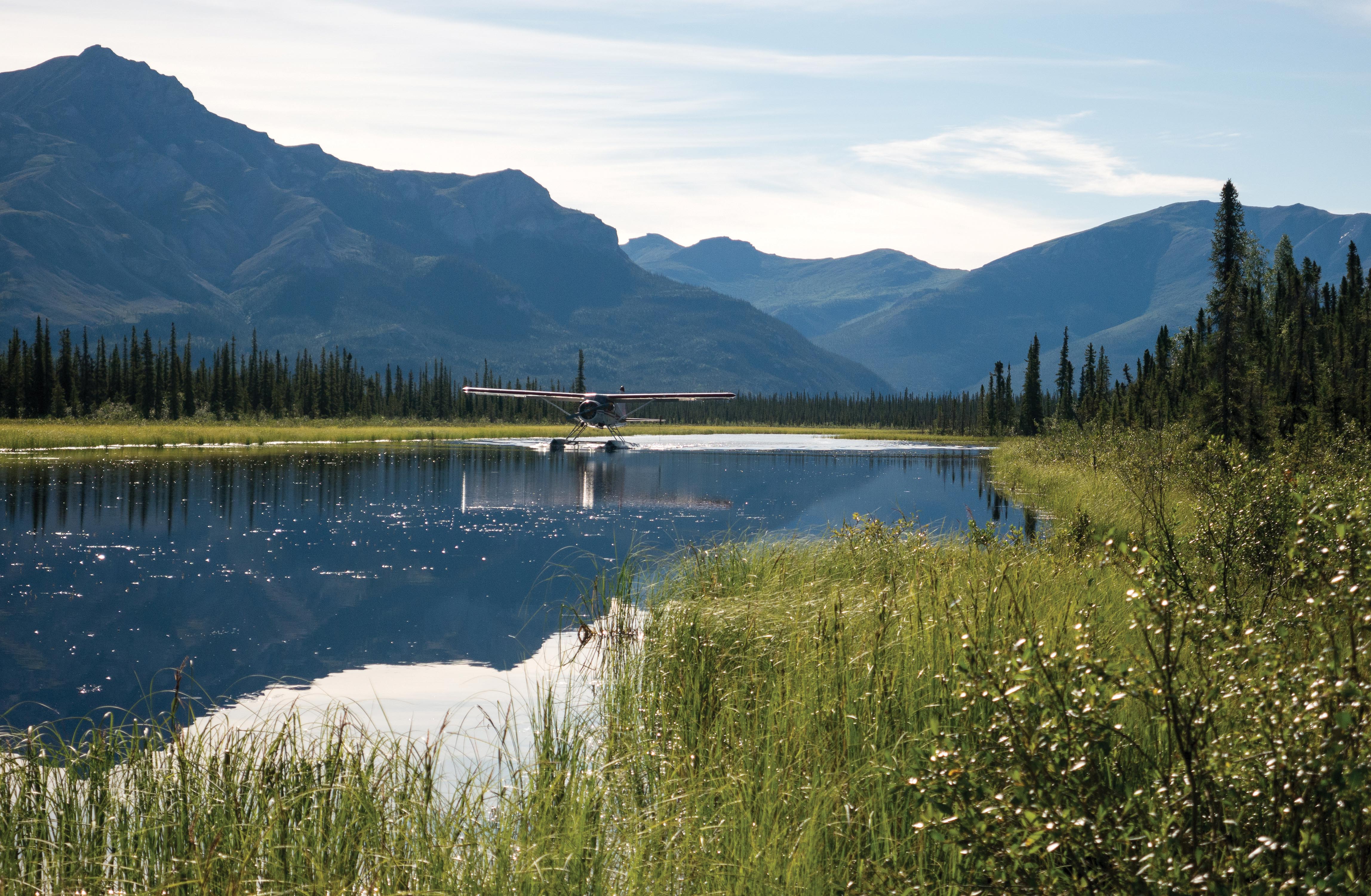 The foursome ventured by plane and trekked on foot to the deep Alaskan backcountry. They traveled light—but with heavy hearts. “Chris would sail up this,” they thought.

A few days of heavy rain soaked the rock, interrupting their steady progress, and the climbers retreated to their tents to wait for skies to clear. They had made it three-fourths of the way and were restless to reach the top.

Soon they got their chance. One day after dinner, Braasch and Engberg agreed the rock had dried enough for them to make the final, 400-foot push. After climbing through the night, they reached the summit at dawn. Bain and Boning, perching on a ledge below, soon took their turn at the top. It was July 12, 2017, almost a year after Vale’s death.

“Chris would have been the most psyched of any of us to be on that wall,” Bain says. “I remember looking out across the Arrigetch. The light was shining through the clouds, almost as though it was from heaven. The mountains stretched forever and ever, and they had this draw to them, this raw, unexplored energy. I kept thinking, ‘Wow, if Chris was here.’ We were so happy we could do something so exciting in his memory.”

Alexandra Pattillo is a health, science, and adventure writer based in New York City.