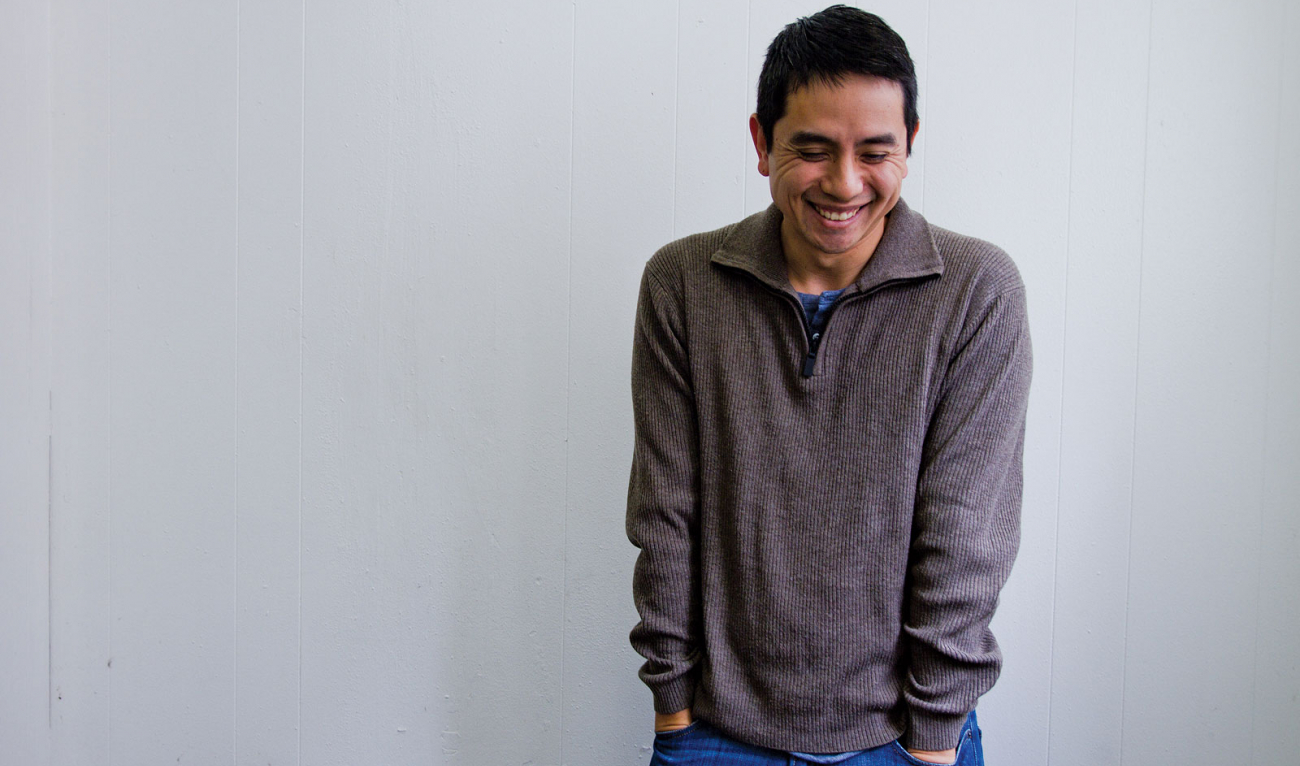 “It is our duty to be thoughtful about what we put out into the world,” says children’s book author Minh Lê ’01.
Joseph Babcock ’08 | September-October 2020

It was 3 a.m. in early March 2015, and Minh Lê needed a new idea for his next children’s book. A call from his agent earlier that evening had brought good news: Illustrator Dan Santat wanted to collaborate. But Lê had to pitch an idea fast, in the next day or two, before Santat went on tour to celebrate winning the Caldecott Medal, the Pulitzer Prize of picture books.

Lê (pronounced “lay”) had brought his newborn son home from the hospital a day earlier. Lê held his son in his arms, rocking the baby to sleep as he paced back and forth, brainstorming. “How do you come up with an idea for someone who just won the biggest award in children’s literature?” Lê remembers thinking.

Then he spotted a Vietnamese lacquer painting hanging on the wall. It depicted a grandfather and grandson writing calligraphy together. Something clicked.

As a child, Lê had trouble communicating with his grandparents, who spoke only Vietnamese. “I’d go to their house and spend a lot of time with them, and I loved them so much,” Lê says. “But the fact that I couldn’t communicate with them through language was something that always gave me pause.”

Lê wanted to write a story that “honored the depths of love that exist there, but also the struggles that come with not being able to communicate and having to find a way to make a connection despite that,” he says.

The result was Drawn Together, a picture book that tells the story of a young boy who learns to connect with his grandfather through drawing. A commercial and critical success, the book won several awards, including a 2019 Asian/Pacific American Literature Award, and starred reviews from Booklist and School Library Journal, which described Drawn Together as “perfectly paced to express universal emotions that connect generations separated by time, experience, and even language.”

The writer focuses mostly on the reaction from readers. “What’s been great about having the book out there is being out on tour and going to readings. I’ll get a lot of people who come up with a similar experience,” Lê says during a video call from his home north of San Diego, where he moved this year with his wife and two sons.

Lê was interested in writing children’s books even during his undergrad days at Dartmouth, where he majored in psychology. “I was known as the person who had a journal full of half-baked ideas,” Lê says. It wasn’t until 2014, when he was working in Washington, D.C., as an early childhood policy expert, that he first gave it a try. Lê was part of a team of federal experts who were writing the first comprehensive national childcare regulations in nearly 20 years. During the day he examined health and safety data and anecdotes from across the country on a tough subject—fatalities in early childhood settings.

It was important work and something that Lê remains proud of. “But I also needed some creative relief,” he says. “To go home and write something that was also ideally benefiting kids created a nice balance.”

Lê’s first book, Let Me Finish!, came out a few years later and was selected as a “Best Book of 2016” by National Public Radio. Since then, he has written stories for three other picture books, as well as a middle-grade graphic novel for DC Comics called Green Lantern: Legacy.

His latest project is another collaboration with Santat. Lê says he enjoys working with the illustrator because of his artistic vision and the inspiration he brings to their projects. For example, in Drawn Together Santat, who is Thai American, created Thai characters.

Lift,  their new book published in May, tells the story of a young girl who discovers a magical elevator button in her bedroom that transports her to fantastical worlds. Lê sees a connection to the collaborative process of writer and illustrator working together to tell a story. “A manuscript to me is kind of like having a magic elevator button—you don’t know what’s going to happen on the other end,” he recently told an online audience. Both adults and children had logged on to watch Lê and Santat perform a live reading of Lift.

“I want to create something, in partnership with the illustrator and the editor, that will potentially resonate with all different age groups,” Lê says. “As a picture book author, one of the things I love to think about is, if you do create something that really does resonate with a kid, then that’s like a friend the kid will take with them for their whole life.”

Joseph Babcock is a writer based in California. He teaches at the University of San Diego. For more on Lê’s work, go to minhlebooks.com.