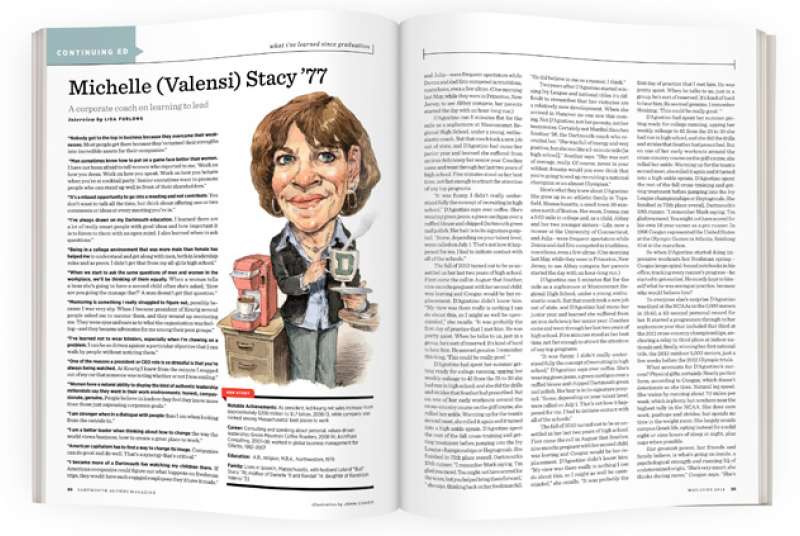 A corporate coach on learning to lead.
INTERVIEW BY LISA FURLONG | May - Jun 2014

“Nobody got to the top in business because they overcame their weaknesses. Most people get there because they’ve turned their strengths into incredible assets for their companies.”

“Men sometimes know how to put on a game face better than women. I have not been afraid to tell women who reported to me, ‘Work on how you dress. Work on how you speak. Work on how you behave when you’re at cocktail party.’ Senior executives want to promote people who can stand up well in front of their shareholders.”

“It’s a missed opportunity to go into a meeting and not contribute. You don’t want to talk all the time, but think about offering one or two comments or ideas at every meeting you’re in.”

“I’ve always drawn on my Dartmouth education. I learned there are a lot of really smart people with good ideas and how important it is to listen to them with an open mind. I also learned when to ask questions.”

“Being in a college environment that was more male than female has helped me to understand and get along with men, both in leadership roles and as peers. I didn’t get that from my all-girls high school.”

“When we start to ask the same questions of men and women in the workplace, we’ll be thinking of them equally. When a woman tells a boss she’s going to have a second child often she’s asked, ‘How are you going the manage that?’ A man doesn’t get that question.”

“Mentoring is something I really struggled to figure out, possibly because I was very shy. When I became president of Keurig several people asked me to mentor them, and they wound up mentoring me. They were eyes and ears as to what the organization was feeling—and they became advocates for me among their peer groups.”

“I’ve learned not to wear blinders, especially when I’m chewing on a problem. I can be so driven against a particular objective that I can walk by people without noticing them.”

“One of the reasons a president or CEO role is so stressful is that you’re always being watched. At Keurig I knew from the minute I stepped out of my car that someone was noting whether or not I was smiling.”

“Women have a natural ability to display the kind of authentic leadership millennials say they want in their work environments: honest, compassionate, genuine. People believe in leaders they feel they know more than those just espousing corporate goals.”

“I am stronger when in a dialogue with people than I am when looking from the outside in.”

“I am a better leader when thinking about how to change the way the world views business, how to create a great place to work.”

“American capitalism has to find a way to change its image. Companies can do good and do well. That’s a synergy that’s critical.”

“I became more of a Dartmouth fan watching my children there. If American companies could figure out what happens on freshman trips, they would  have such engaged employees they’d have it made.”